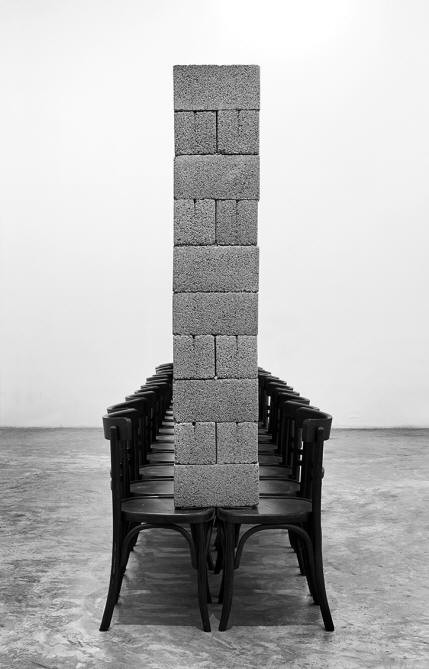 The Ileana Tounta Contemporary Art Center presents Manolis Baboussis’new solo show Beyond Planning. The show will open on Thursday, 6 February 2014, and will run until 22 March.

The show will be accompanied by a catalogue. The date of its presentation will be announced.

In his new solo show Beyond Planning Manolis Baboussis presents a body of work that consists of a sculptural installation, drawings, photographs, texts of the artist and one video projection. The works mainly express thoughts about memory, loss, environment, the Beyond Planning series, the Athina-city, the imaginary Babou-city and a series from monuments as the Cemetery of The Anonymous Artists.

As the curator of the exhibition, Alexios Papazacharias, states:

«...All those drafts define the preparatory sketches and models of an imaginary city as much as of a real society, on whose account Manolis Baboussis defines communication as a cement wall rising upon the fragile legs of a wooden chair: an anti-monument of lack and weakness, of inactivity and inadequacy; a monument of interrupted communication....

Manolis Baboussis’ anonymous artists are liberated from of constrictions expression that consist in declaring an identity, as much as in denying another one; if not the caustic critics of a disappointing reality, then the architects of utopia, they negotiate the terms of cohabitation within a society apathetically observing its discontents. The anonymous ones suggest new monuments and institutions: the National Museum of Contemporary Robbery, offering theft an official position in history, the Tourist Bus for a tour into corruption, the Nothing Shop, the architectural monument that is simultaneously a crane and gallows, fountains with microphones instead of water sprouting. Anonymous artists today present Baboussis’ artistic practice - drawing, architecture, discourse, and sculptural installation as a field that allow the world’s reconstruction and the articulation of his work as a whole...»
www.art-tounta.gr