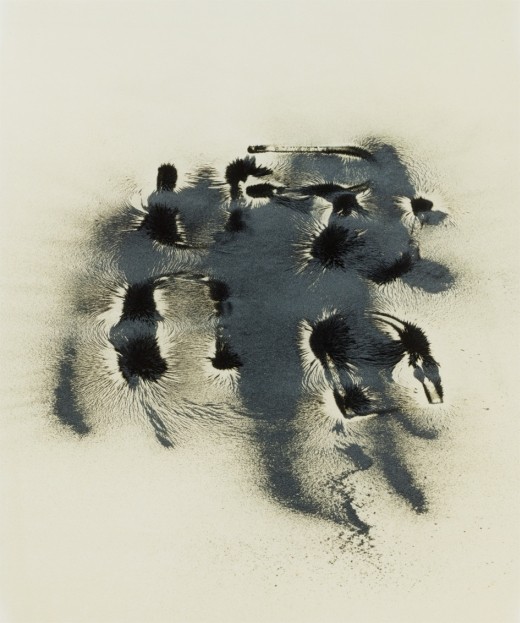 Johann König, Berlin is pleased to present the second solo exhibition of works by Annette Kelm.

Annette Kelm’s new works show the lines of physical forces caused by the random scattering and piling of iron shavings on yellow and green paper backgrounds. At first glance, one might see these as depictions of experimental systems such as those used to represent ferromagnetic forces in lexical entries on Wikipedia or in school experiments, in other words - scientific photography. This impression is shaken by Annette Kelm’s use of diffused light and various dispersions. Some of the photographic works create an almost three dimensional effect where on closer examination, lines dissolve into powdery, jagged piles of dirt or smears, whereas some are still clearly recognizable as magnetic field lines. Two still lifes of poppies and a repeated motif of the iron shavings interrupt the latters’ seriality.

Since its discovery in antiquity, magnetism is a motif that has been placed in various categories and classification systems. The history of science has largely been shaped by its functions. Present in electromagnetic data carriers, electric generators, transformers as well as MRI scanners, it plays a decisive role in both daily life and critical science. Up until the last century, alongside its discovery and early applications in the natural sciences, magnetism was also seen as a mysterious phenomenon. The attraction and repulsion of two magnets has been understood as an allegory for love and hatred between people. To date, magnetism is veiled within the manifestation of the magical.

Annette Kelm (*1975, Stuttgart) lives and works in Berlin. Over the past years, she had solo exhibitions at international venues like KW – Institute for Contemporary Art, Berlin; Kunsthalle, Zürich; Witte de With, Rotterdam; CCA Wattis, San Francisco. Works by Annette Kelm were part of numerous group exhibitions such as the 54th Biennial in Venice (2011) and the 9th Biennial in Lyon (2007). In 2009 she received the public choice award within the Prize for Young Art by the Nationalgalerie, Berlin. After the collaborative exhibition with Michaela Meise at the Bonner Kunstverein both artists currently show at Gallery Meyer Kainer, Vienna. This year Annette kelm will have further solo exhibitions at Presentation House Gallery,Vancouver and at Marc Foxx, Los Angeles.
www.koeniggalerie.com