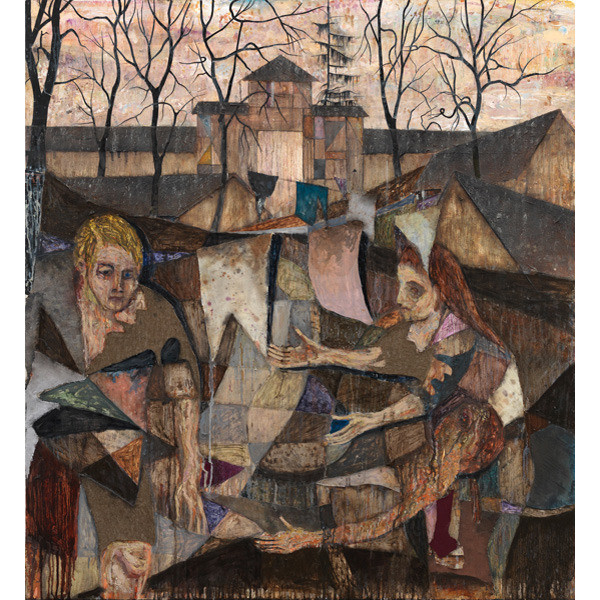 The exhibition Hidden Stories confronts works by four international artists: Armin Boehm (b. 1972), Olaf Breuning (b. 1970), Nigel Cooke (b. 1973), and Mike Kelley (1954–2012). What reverberates through these four stylistically and formally diverse artists’ works is an interest in exploring the boundaries between reality and fiction, the conscious and the subconscious, the rational and the abstract, as well as the transitions between these poles. There is also a tendency toward a narrative, symbolic presentation of content, which arises from the scientific, psychological, and psychiatric themes that engage these artists. Primarily, the works shown deal with contemporary themes, as well as myths communicated through literature and cultural history, along with private, biographically determined narratives. Some of the works touch upon extra-sensory phenomena, which elude rational control, while others deal with repressed memories and the traumas of the artists’ own childhoods. Hidden Stories features imaginary places where multilayered realities meet hazy daydreams, as if in a picture puzzle.
In point of fact, the paintings, sculptures, collages, and installation in this exhibition are not artificial, quixotic products. The artists are just as equally concerned with formulating perspectives and alternatives to today’s world, by providing critical models in which individual utopias and visions of freedom are subtly reflected. These range from Mike Kelley’s radical attack on false morals and their compulsions to Armin Boehm’s skepticism toward the supposed omnipotence of the sciences, to Olaf Breuning’s exploration of the many layers of the subconscious, to Nigel Cooke’s idea of using the spiritual reservoir of a dramatic abstraction to portray the apocalypse.
www.kaistrasse10.de