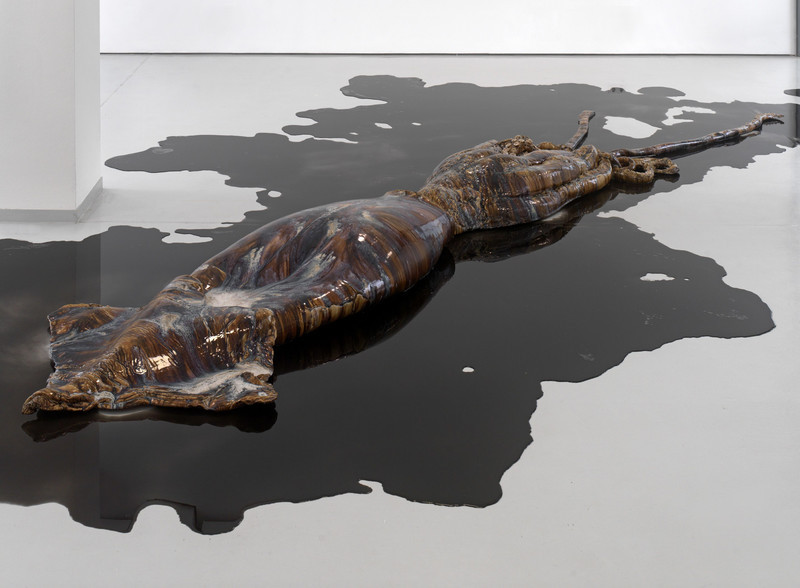 Talking about humankind’s relationship to nature and the animal world ultimately means talking about humanity itself, about its biological roots, which even a highly refined civilization can never leave behind.

By asking to what extent we are bound to our animalistic nature, and what distinguishes our existence from that of animals, we open up an intriguing, inexhaustible field of interpretations. Insects and other creatures not similar to human beings also form a substantial reservoir of metaphorical comparisons about the behavior of individuals or even entire communities. The exhibition Lost Paradise traces these metaphors throughout contemporary art, reviving primeval creatures in pictures, inventing beetles that can transform themselves into coins, or turning natural science archives into surreal chambers of curiosities.

Have we slipped out of an original, natural state—say, the biblical Paradise—into today’s valley of earthly sorrows? Have we gone from being good animals to bad human beings? Is paradise a place where those who have not led too sinful a life can hope to go? Or is it a state of existence attained by relinquishing our biological, organic lives? Thomas Aquinas was convinced that, after the Resurrection, all physical needs common to humans and animals, such as eating, drinking, sleeping, and reproduction, would no longer exist. Human beings would rediscover themselves, as it were, in a purely spiritual form.

Yet, as long as we have our material existence on earth, we remain connected to the animal world—not only biologically, but also metaphorically. Comparisons between humans and animals are primarily made wherever they seem most logical—in terms of external features or living environments. Animal physiognomy uses external similarities to draw parallels between human traits and those of certain kinds of animals. Whereas dogs and cats trigger intense sympathy in many people, insects often awaken disgust and repulsion. Rarely does anyone advocate protecting them. Still, they play a crucial role in the ecological balance of life on earth. Mark Dion pointed out that insects form the overwhelming majority of animals on this planet: “So we don’t actually live in the age of animals, but in the age of insects.”

While examining Dion’s diagnosis of our time period, the exhibition Lost Paradise also inquires into the physiognomic roots of the world of creatures that bear no resemblance to humans, as well as their volatile interactions.

The American artist and sculptor Mark Dion devotes himself to a special kind of archival work. An obsessive collector, he seeks out and finds objects in nature, and, like a scientist, classifies them in fictitious laboratories and archives. Elements of animals and plants find a place in his research labs. Originally a conservator, Dion uses taxidermy animals, such as geese and other birds—some of which are coated in tar—to comment on threats to the environment, while at the same time critiquing our utilitarian concept of nature.

The German photographer and video artist Stefan Panhans makes short films that deal more with the visual than the narrative. Even though his occasionally elaborate films contain comprehensible content, the coherent plot expected of a film is missing. When watching these videos one may be reminded of the “living pictures” that were so popular in photography around 1900. Nevertheless, the author leaves no doubt that these presentations are eminently contemporary. His actors are often celebrities from the pop, art, or fashion scenes, but they can also be anonymous young people in even more contemporary, often more outlandish clothes. The video If A Store Clerk Gave Me too Much Change is a puzzling and mysterious projection about the metamorphosis of a person who turns into a caterpillar in a red sleeping bag, recalling Franz Kafka’s “The Metamorphosis.”

Two Russian artists based in the Netherlands, Marta Volkova and Slava Shevelenko, tell us a fable about a special kind of beetle, the “Tunguska Scarabeus,” which is capable of transforming itself externally to resemble different objects in its environment. For example, the beetles can take on the guise of coins. Their imitative ability gradually becomes so refined that it becomes more and more difficult to tell the difference between them and real coins. The installation, From the Life of a Beetle), which includes extensive, large-format panel drawings and numerous ceramic objects, looks like a combination of scientific laboratory, chamber of curiosities, and natural history museum.

Animal motifs seem to play a subordinate role in the works of Cologne-based painter Andreas Schulze. Yet, even in his early paintings the occasional deer, zebra, giraffe, or horse appears as an element in a universe of things and creatures, where conditions are paradisiacal and humans are only vicariously present. Flowers, trees, and other plants are accorded a similar, apparently innocent role. In this version of Eden animals are not dangerous, especially considering that they tend to look more like toys in the paintings. Even his dancing octopuses off the coast of Sicily transform the landscape into a surreal scene in which the animals play a soulful, self-liberating role.

David Zink Yi, a Peruvian artist based in Germany, examines the animal theme in the context of his interest in the cryptic colossal squid. These mollusks are deep-sea dwellers and have never been seen by humans, except when their dead bodies have been found washed up on shore. David Zink Yi’s intention is to elevate the artistic status of this “nature’s refuse,” as he calls them. In his group of works titled Archetheutis he not only evokes the powerful, dead animals as natural phenomena, but also exalts their corpses, turning them into grand sculptures made of glazed ceramic. Their opalescent surfaces, supplemented by the black ink the animals use in self-defense, allude, as it were, to the gray area between life and death, this enduring natural state.

An accompanying catalogue will be published by Kerber.
www.kaistrasse10.de