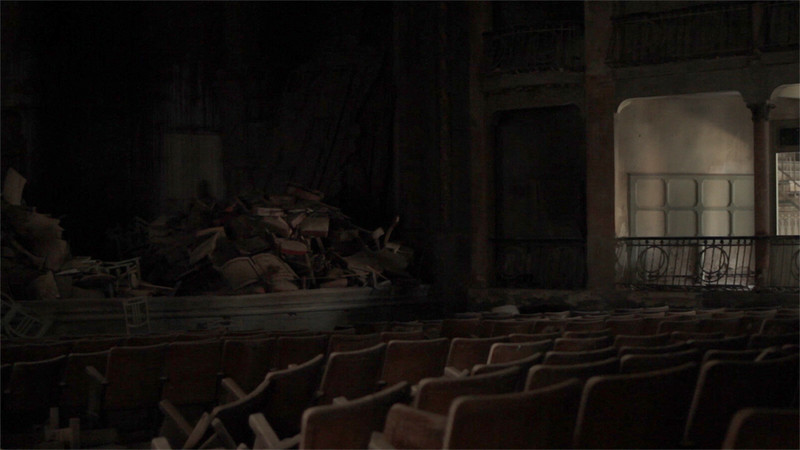 Hamza Halloubi, 'Appear' (work in progress), 2014.
KIOSK presents a duo show with work by Moroccan artist Hamza Halloubi (1982, currently based in Brussels and Tangier) and Lebanese artist Rana Hamadeh (1983, currently based in Rotterdam). Both artists seek out the fictionalized and subjective narrative within the public reality of our existence. Their stories offer an alternative for the conventional understandings of history, language, identity and difference.

With his video work, Hamza Halloubi aims for an essentialized reading experience. He reduces the image to its most elementary form: a cinema that captures and transforms reality. Austerely shot footage, voice-overs, familiar-looking spaces such as living rooms or theatres, and subjects like solitude, dislocation, and institution are elements that recur throughout his work. Guided by the artist-author’s voice, Halloubi’s work maintains a philosophical aspect that refers both to theoretical knowledge and to personal memories. After surveying a place or person in its entirety, he penetrates the surface towards a more complex history of the subject matter.

The exhibition 'Appear' is focalized around the materialization of an appearance and its inner thoughts, knowledge and memory. At KIOSK, Halloubi presents a new work in progress that takes a fascination for Iranian actress Golshifteh Farahani as its starting point. Farahani plays the part of a public Hollywood personality and diva, but at the same time she is a political refugee who carefully shields her identity and personality from the public. The question as to how a figure like Farahani might appear leads to extensive research into her appearance and the various idealizations that are projected upon her by the language of cinema and media in the West and the East. The resulting portrait, 'Appear', developed from the idea of the unapproachable and the possibilities under these conditions for two people to meet directly or indirectly in front of a camera. Two more video pieces, 'Letter to Aura' (2012) and 'Apparitions à Soco Chico' (2013) relate to the same theme. 'Letter to Aura' starts from the artist’s subjective narration to reflect on his specific geopolitical location. 'Apparitions à Soco Chico' questions the contemporary perception of filmed images in relation to the history of cinema.