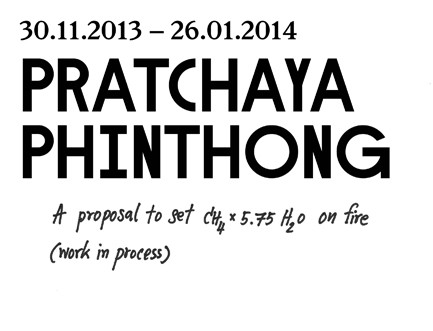 KIOSK presents a duo exhibition featuring the work of Thai artist Pratchaya Phinthong (1974, currently based in Bangkok) and American artist Zachary Formwalt (1979, currently based in Amsterdam). The practices of these two artists share an outspoken discursive and essayistic quality. In their research they reveal connections between historical, social and political events and search for ways to express social and economic processes that are less visible.

Pratchaya Phinthong initiates a new project dealing with methane hydrate or ‘burning ice’ at KIOSK. The artist is fascinated by the poetic image of burning ice, and also by its metaphorical potential in light of important current geostrategic and social issues such as energy, the economy, and ecology. The sedimentary deposits of methane hydrate are estimated to contain anywhere between two and ten times the amount of methane of the entire known reserves of natural gas. As such, they form a potentially crucial future source of fossil fuel. Phinthong deploys this thought-provoking idea as a conceptual tool for organizing his show 'A proposal to set CH4 · 5.75H2O on fire (work in process)'.