Rana Hamadeh: 'A River In A Sea In A River' 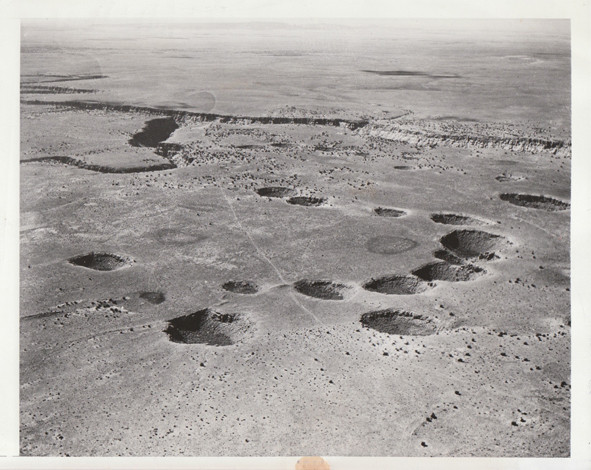 Rana Hamadeh, 'A River In A Sea In A River' (Craters formed by fallen meteorites, Arizona, press photo, 1942, Courtesy of the artist)
KIOSK presents a duo show with work by Lebanese artist Rana Hamadeh (1983, currently based in Rotterdam), and Moroccan artist Hamza Halloubi (1982, currently based in Brussels and Tangier). Both artists seek out the fictionalized and subjective narrative within the public reality of our existence. Their stories offer an alternative for the conventional understandings of history, language, identity and difference.

Rana Hamadeh’s practice currently revolves around 'GRAPHIS N°127' and 'Alien Encounters', two overarching long-term projects in which found documents, historical events, personal encounters and fiction are interwoven in new installations, publications and lecture performances. Throughout her fictional tales and scripted performances, the artist questions the conditions of looking and interpreting, the restrictive nature and the authority of signification.

The exhibition 'A River In A Sea In A River' is a further exploration of the themes of 'Alien Encounters' by way of a theatrical scenography: a large installation in the central exhibition room presents a map and a series of objects that set out the storylines of the research at hand. The table piece can be read as a non-linear sequence of political events, associative traces and cultural constructions that problematize the notion of ‘alienness’ or ‘alienation’. Hamadeh’s fascination for the ‘alien’ encompasses not only the extra-terrestrial being, but also the outsider, the outlaw, and his potential for resistance. 'A River In A Sea In A River' aims for a narrative topology with an expanding cartographic network of stories, places and encounters. Hamadeh considers the installation a functional ‘war map’ and ‘catwalk’, a tailor-made tool to be employed in her lecture-performances in the exhibition space.