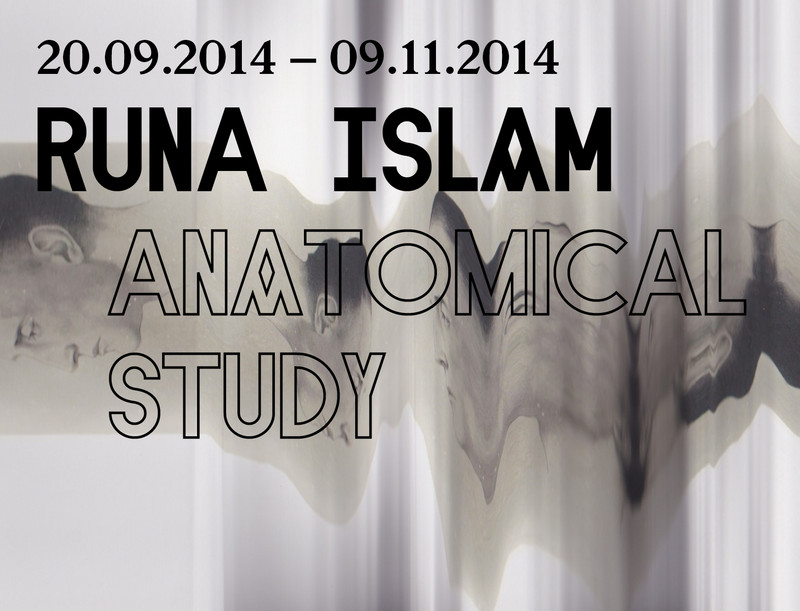 The work of Runa Islam (1970, Bangladesh, lives and works in London) is known for looking outside a given frame of view in its nuanced enquiry into matters of perception and representation. She often combines a conceptual and experimental approach, transforming, disrupting and enhancing existing visual mechanisms.

For the exhibition Anatomical Study presented at KIOSK, Islam explores new methods of working whilst reflecting upon the rapidly changing climate of moving image technologies and finds a way to reconsider and essentialise the materials of the film medium beyond issues of obsolescence.

Engaging with the original function of the KIOSK space as a didactic anatomical theatre, Islam presents two existing works titled Anatomical Study I, a 16mm film and Anatomical Study II, a sculpture. Alongside these works a new series of sculptures and drawings have been made using the meaning and methods of such studies. In place of traditional cinematographic images, Islam dissects their innate qualities in their finest particulate detail. For example, considering the process of film as akin to a functioning body, Islam has created the sculptures solely from silver retrieved from exposed film stock (one of few physical residues that remain from film’s fleeting succession of images). In a type of alchemical transfiguration old bodies yield new forms.

The ‘raw’ film-silver, is presented as a stock of bars. In addition, several everyday items found in the working environment of Islam’s studio, among which a number of old pencils and an orchid plant, are the subject of the new sculptures made from this stock. Promoting endless permutations, Islam further instrumentalises the cast pencils to create a set of silverpoint drawings. Notably, silverpoint was a drawing technique favoured during the early Renaissance. The images vary from architectural details at KIOSK to references to eighteenth-century anatomical wax models and self-reflexive drawings of the pencils themselves.

Alongside Islam’s works, a group of nineteenth-century hand-made wax orchids from the collection at Kew Gardens, London are displayed. These artefacts were commissioned as teaching aids in an era prior to photography, much like the anatomical wax models of the same era. Considering a pre-photographic era underscores Islam’s experiments at KIOSK. Her inquisitive investigations into form shifting – back and forth from image to object, (between two-dimensional representation and three-dimensional presentation), open up questions about how artistic expression grapples with formal constraints, as through the meticulous cutting and combining of separate fragments, Islam creates a narrative to fit the exhibition space.