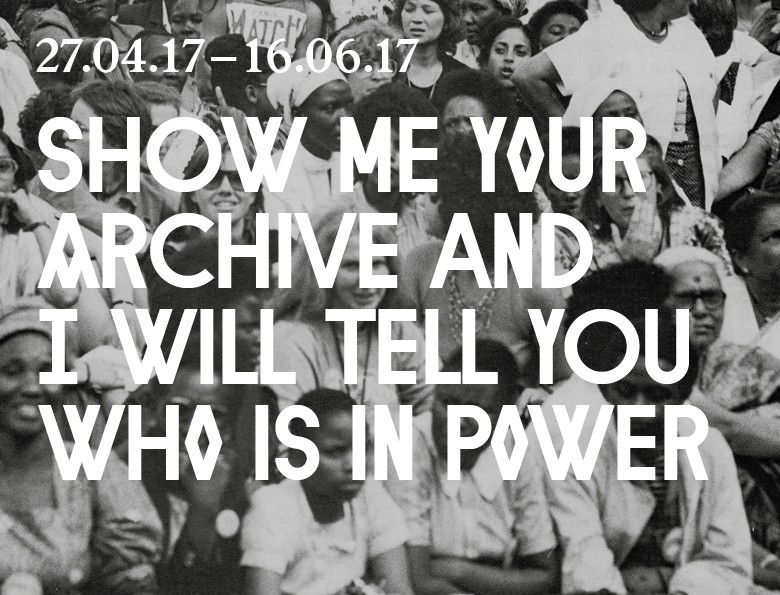 "The Great Court," at the opening ceremony of the World Conference on the UN Decade for Women, University of Nairobi, Kenya, 1985. From "Forum '85 NGO Planning Committee Final Report: Nairobi, Kenya.". Copyright: International Women's Tribune Centre Records, Sophia Smith Collection, Smith College (Northampton, MA)
Show Me Your Archive and I Will Tell You Who is in Power opens on April 27 at 19:00 with a film screening of La conférence des femmes, Naïrobi '85 by Françoise Dasques, followed by a conversation between Paola Bacchetta and Françoise Vergès. The opening of the exhibition will take place on April 28 at 20:00.

Show Me Your Archive and I Will Tell You Who is in Power combines an exhibition with a public program of lectures, panel discussions, performances and screenings to present stories from the history of feminist struggle. Issues of race, gender and class are covered from a so-called intersectional perspective, an approach that works to bring to the fore the combinations of discriminatory practices and the dynamics they engender. The project’s title refers to the 2009 lecture of the same name by Gloria Wekker, renowned Surinamese-Dutch scholar with an established reputation within the transnational and Black European feminist discourse.

Show Me Your Archive and I Will Tell You Who is in Power wishes to extend its scope beyond Western, white feminism and to trace the beginnings of a transnational and intersectional perspective in Belgian feminism and beyond. The project’s starting point was the Ghent Royal Academy of Fine Arts and its first (and thus far sole) female head Chantal De Smet, who held the position from 1989 to 1996. In the early 1970s, De Smet was a central character in the Ghent Dolle Minas, one of the first initiatives of the second feminist wave in Flanders. She was also one of the driving forces behind the Belgian Angela Davis Committee.

It was the second feminist wave that pushed the United Nations to taking measures to improve the position of women, resulting in the UN declaring the period 1976-1985 the decade of the woman and the organisation of women’s conferences in Mexico City (1975), Copenhagen (1980) and Nairobi (1985). FORUM ’85, the alternative conference of women’s movements and non-governmental organizations taking place alongside the official UN conference in Nairobi was a key moment in the history of transnational feminism. Attended by 14,000 women, activists and feminists from mainly non-Western countries, it was the first occasion of that scale to stage worldwide encounters and exchanges of ideas.

Documents from public archives that provide insight in these historical and local contexts make up the backbone of the exhibition. In addition, visual artists Marwa Arsanios, Saddie Choua, Amandine Gay, Kapwani Kiwanga, Ato Malinda, Eva Olthof and collective Study Group for Solidarity and TransActions were invited to make new work, connecting with these archives and themes and approach them from a postcolonial, transnational or politically emancipatory context. They offer new critical perspectives on history and in turn help to shape the guise of another new wave of feminism.

The public program wishes to think about how feminism can radically rethink notions such as class, gender and race from a postcolonial perspective. The program starts with a screening of Françoise Dasques’ film La conférence des femmes – Naïrobi (1985) about FORUM ’85, followed by a conversation between Paola Bacchetta (professor of Gender and Women’s Studies, University of California, Berkeley) and French political scientist Françoise Vergès.

The complete program and the latest updates can be found at: www.kiosk.art/showmeyourarchive

Show Me Your Archive and I Will Tell You Who is in Power is organized by KIOSK and KASK / School of Arts Ghent in the context of The Uses of Art – The Legacy of 1848 and 1989, a project initiated by the museum confederation L’Internationale with the support of the Culture Programme of the European Union. The project is curated by Nataša Petrešin-Bachelez, Wim Waelput and assistant curator Rachelle Dufour.