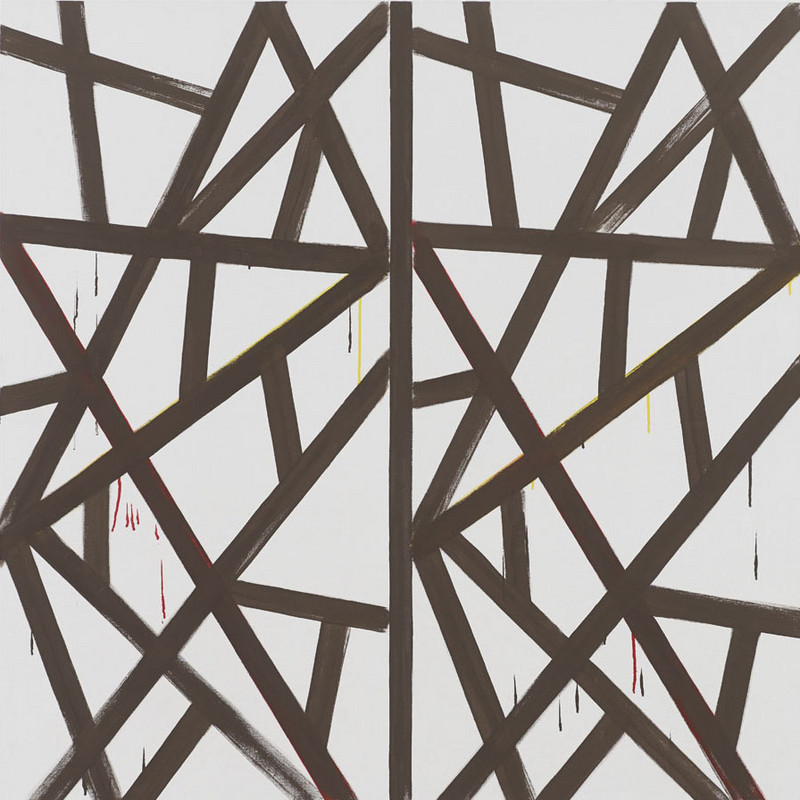 I have never met Bernard Piffaretti. While looking at his paintings, there is no interference other than my own knowledge and visual experience – plus two or three other things I’ve been told about him. This is actually oddly enjoyable when you’re about to write a text about someone’s work. The artist’s intentions, the issues he pursues, his relation towards his own work can only be guessed or even invented in relation to my own preoccupations. Without any direct information about why he chose to follow the same working process for his entire career, nor about his position towards the intense discussions in France about painting in the sixties, I am free to fill in the blanks with more or less fanciful suppositions and deliver a largely subjective portrait of his work. In this situation, his paintings are an ideal projection surface. I can weave a series of ideas into a plot revolving around them, write a story that would intertwine my fantasy with his pictures.
For lack of an encounter with the artist himself, I started speculating about his oeuvre – which is of a rare consistency. Bernard Piffaretti followed the same working process for the duration of his entire career. All of his images have a bipartite structure or, to be more precise, a split one. A vertical line separates the surface of the canvas in two equally wide parts. One of the two halves is painted first. Piffaretti deals with the other half in a second pass: the artist chooses to either paint there a repetition of the initial motif or to leave it empty. The pictures displaying the latter solution are being called Inachevés (or Unfinished). Even though they’re apparently different, both options can be viewed as infused with the same tension. Either the artist tries to reproduce the same gesture without any technical help, and naturally approximates the initial motive, or he decides to (un)finish the painting by not adding anything and leaving it as such. In the first option, he chooses to copy himself, tries to repeat the same gesture, and in the second one he suspends his task and leaves an absence, but in both cases the first half remains unique and unequalled.

As a matter of fact, the initial half gets lost in each of Piffaretti’s numerous attempts to deliver it anew. The artist doesn’t only replicate the initial motif on the same canvas, he also duplicates almost the entirety of his production on paper with colored pencils – inversing the usual causal relation between drawing and painting. By carrying out this parallel task, he has created an almost exhaustive archive of his painted oeuvre. He repeatedly performs this action in his working process and hence operates as a producer of approximate reproductions. Each painting appears to be conceived as a proposal, produced in order to be repeated, but it fades away each time it is replicated. The reproduction doesn’t go hand in hand with the diffusion or even dispersion of the content.

Yet, considering that reproduction builds the core of Piffaretti’s working method, it appears that the phenomena of dispersion happens on another level: it actually commands the working process. The second-hand experience of his work, which usually takes place in relation to books or other forms of documentation, is already embedded in the modus operandi. At the same time, the artist doesn’t take into account any other diffusion facility than his own individual work, which limits the possibility of distanciation or the appearance of otherness in his own work. The constancy of the effort involved to produce such a compendium of images confronts a scrupulous ambivalence – each completed painting speaks for uniqueness and repetition at the same time. Repetition cannot be overlooked, but the paintings also offer a cautious celebration of uniqueness because the initial moment or effort can never be performed again. And indeed, each attempt to re-produce the original motif creates a distance to the initial gesture. His approach underlines the own limitedness – technically and conceptually – as the artist assigns himself a task that cannot be successfully performed. There is something nicely impossible here, a focus on someone’s gesture who seems to work on reaching something, but doesn’t fully aim at succeeding. So much constancy in working on a deceptive process suggests a different understanding of succeeding. In any case, there is no such idea as efficiency here. The image is produced for the sake of it, as a kind of experiment to see "what it would look like if", somehow empirical, rather systematic, but without a progression or evolution. Piffaretti raises thoughts about the thrill of surpassing one’s own and, eventually, about all sorts of fantasies regarding the reasons for this extended effort to hold on to a first draft. His paintings can be viewed as reenactments, as a way to go back in time or to stretch time. Piffaretti’s practice appears to be motivated by the search for something that will not reemerge on the surface of the canvas and in the end involves a form of nostalgia. This is obviously an overly emotional reading, especially considering the fact that Piffaretti was probably studying when most painters in France were working on removing any emotional component from the canvas. But these again are just suppositions.

While fantasizing a dialogue between the two halves, I imagine them repeatedly affirming that one feels like a copy, that it was in any case impossible for the other to retrieve the initial half. The two parts of the painting are dependent on each other. The empty half only appears as such in relation to the first draft, the repetition likewise. No matter which option is chosen, the second part exists in a deceptive relation to the first one. Reciprocally, the first one can only be perceived as the initial one because it is repeated, or left by itself, unaccompanied. The dialogue between the two halves seems to formulate following tacit agreement: "We will pretend to be equal, but we will never be the same". This strategy relates to the sense of estrangement generated by representation at large. Even though the works are not dealing directly with representation, they somehow function along the same mechanisms. Mimesis, which was fundamental to classical painting, is still employed here but it has become self-referential. The paintings are not trying to reflect the world around; rather they are – literally – mirroring themselves. The confusion raised by the paintings and drawings relies on the similarity that takes place on their surface. The images unfold with the childish desire for eternal return of the same, alienating and comforting at the same time. Piffaretti traces his working path along habits and disappearance and addresses the disruption of the habit as the core of the aesthetic experience. Just like the absence of comprehensive information about his work may paradoxically allow me to look closer at his work, the awareness of a missing element – the moment in which the (visual) habit is interrupted – triggers a phase of readjustment, alters the focus and enables to discover a new, precarious, and mysterious picture.