In Lieu of What Is 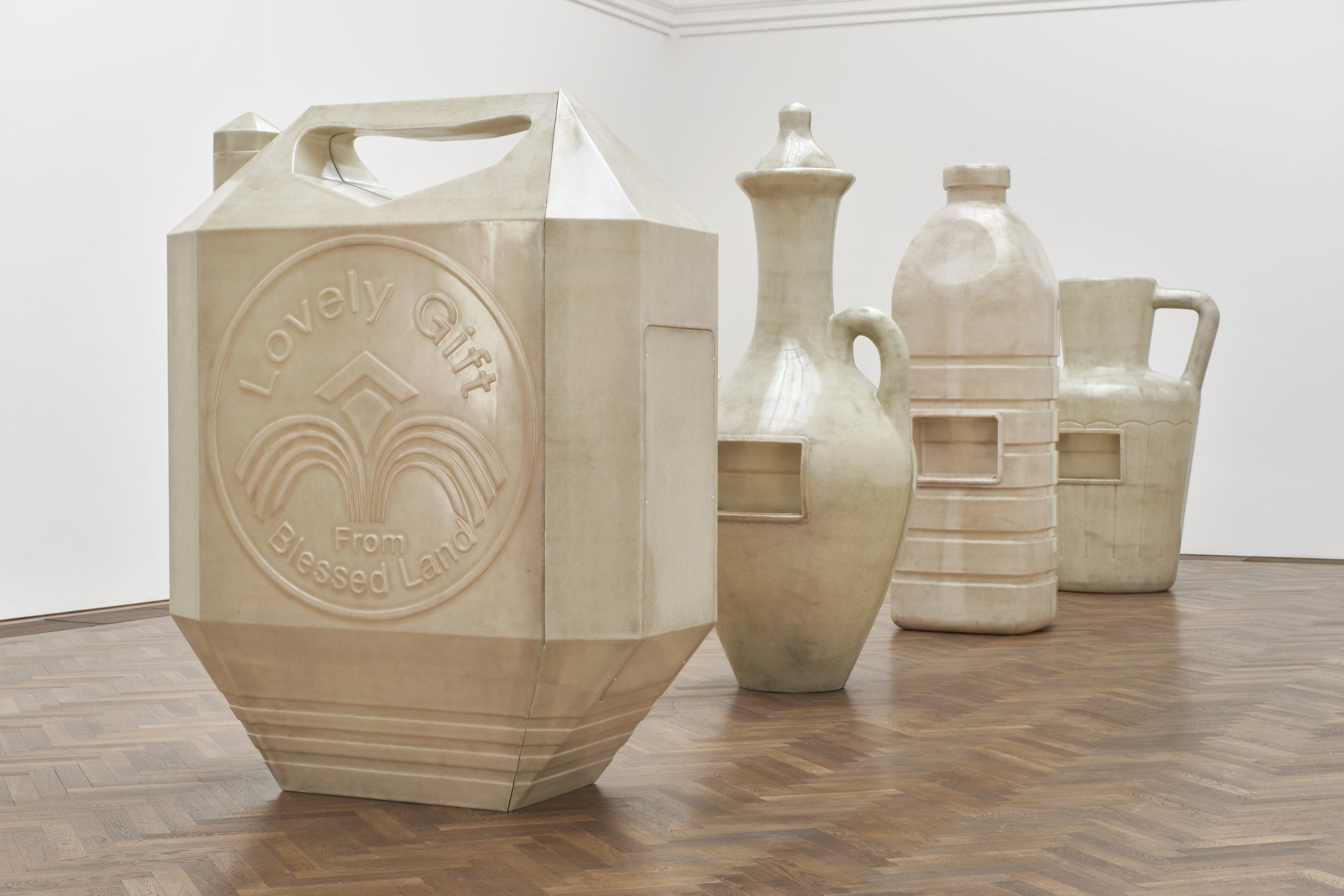 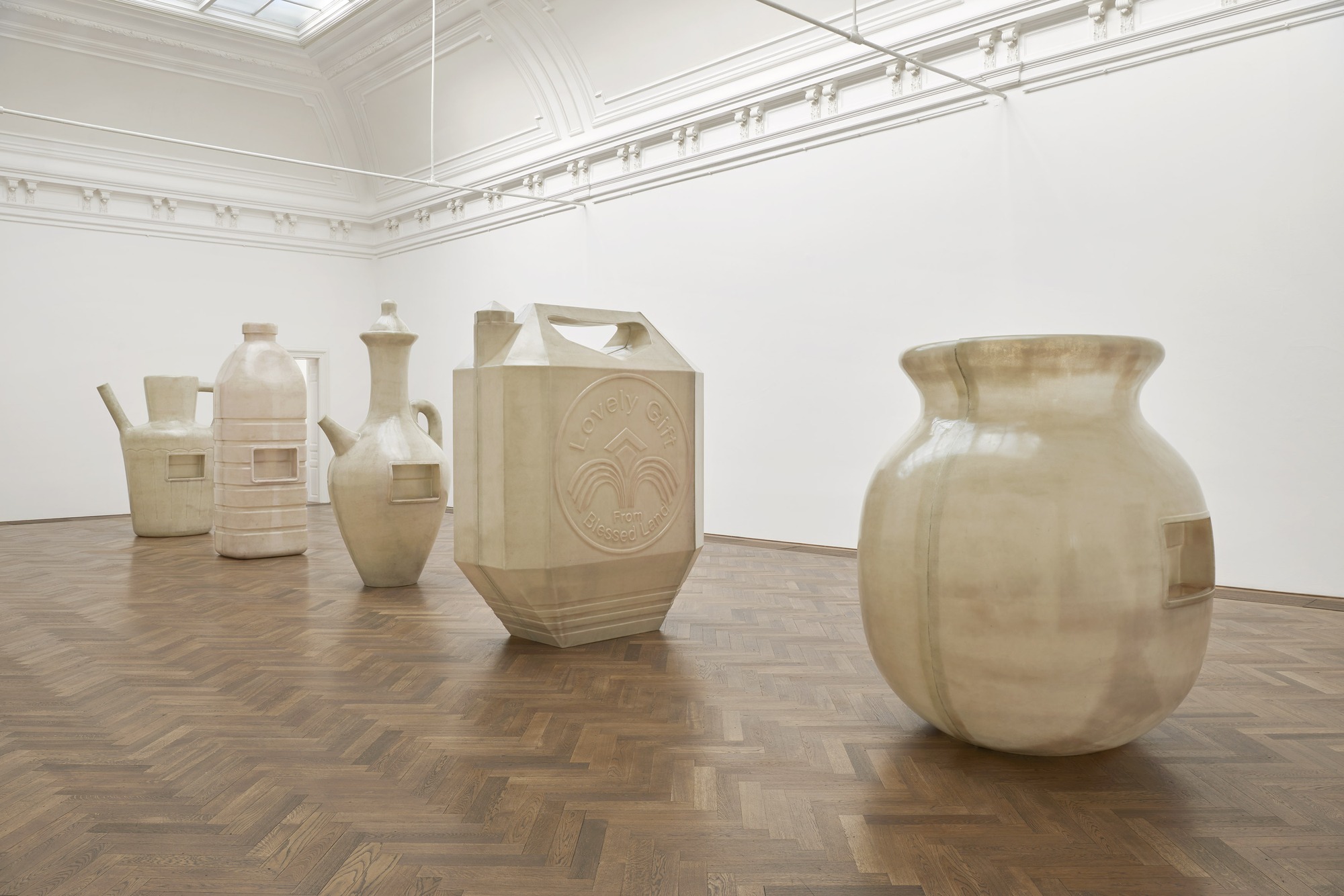 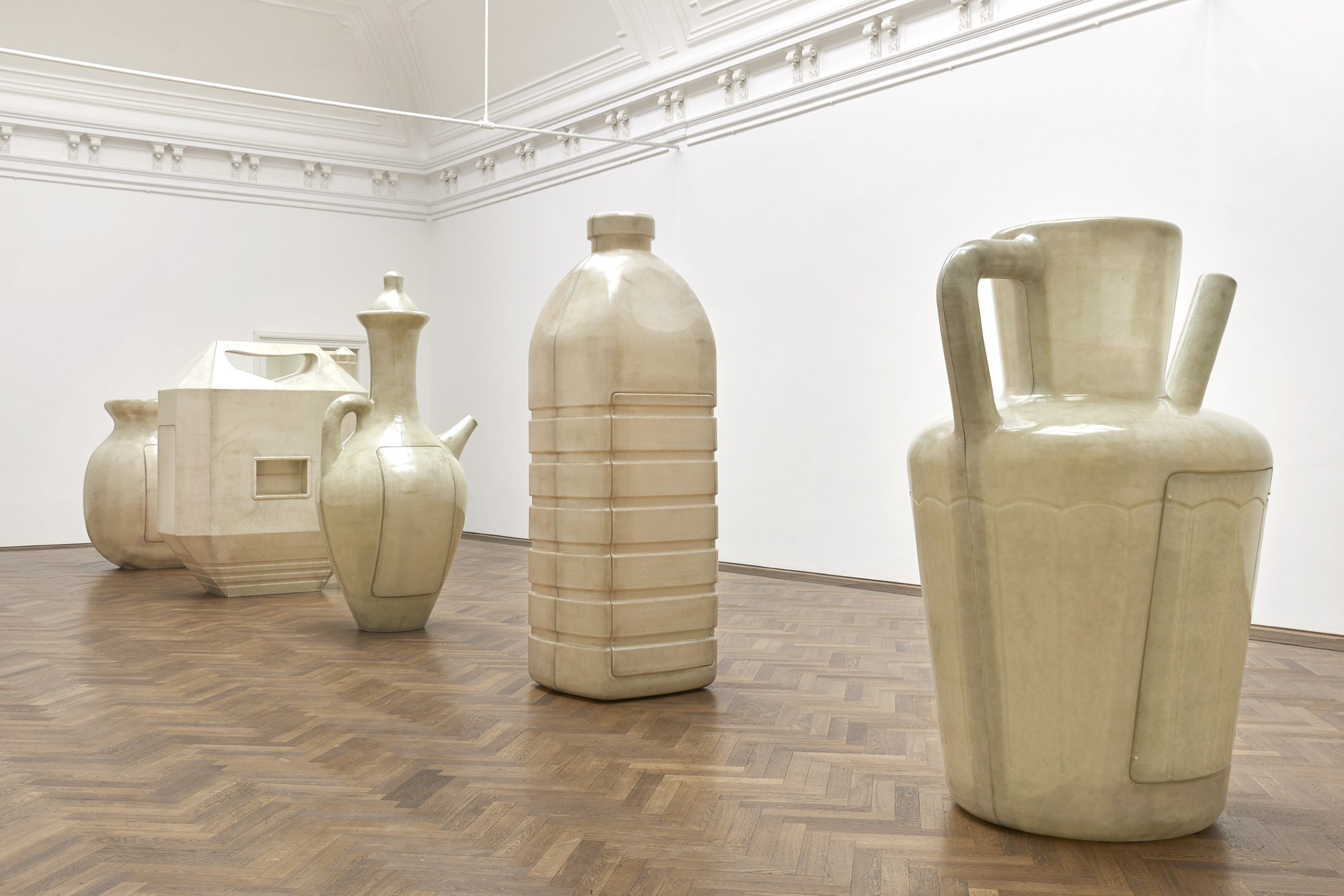 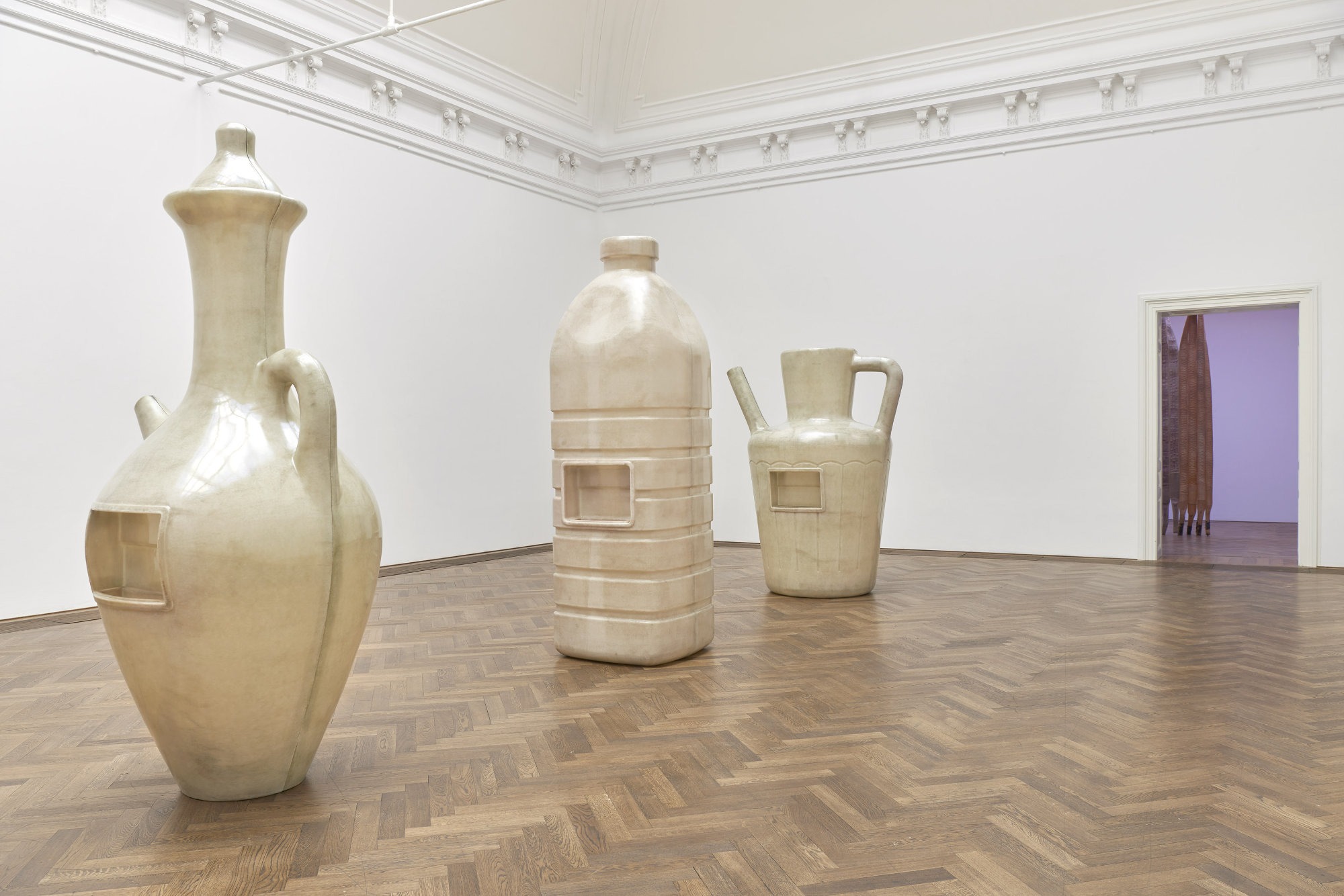 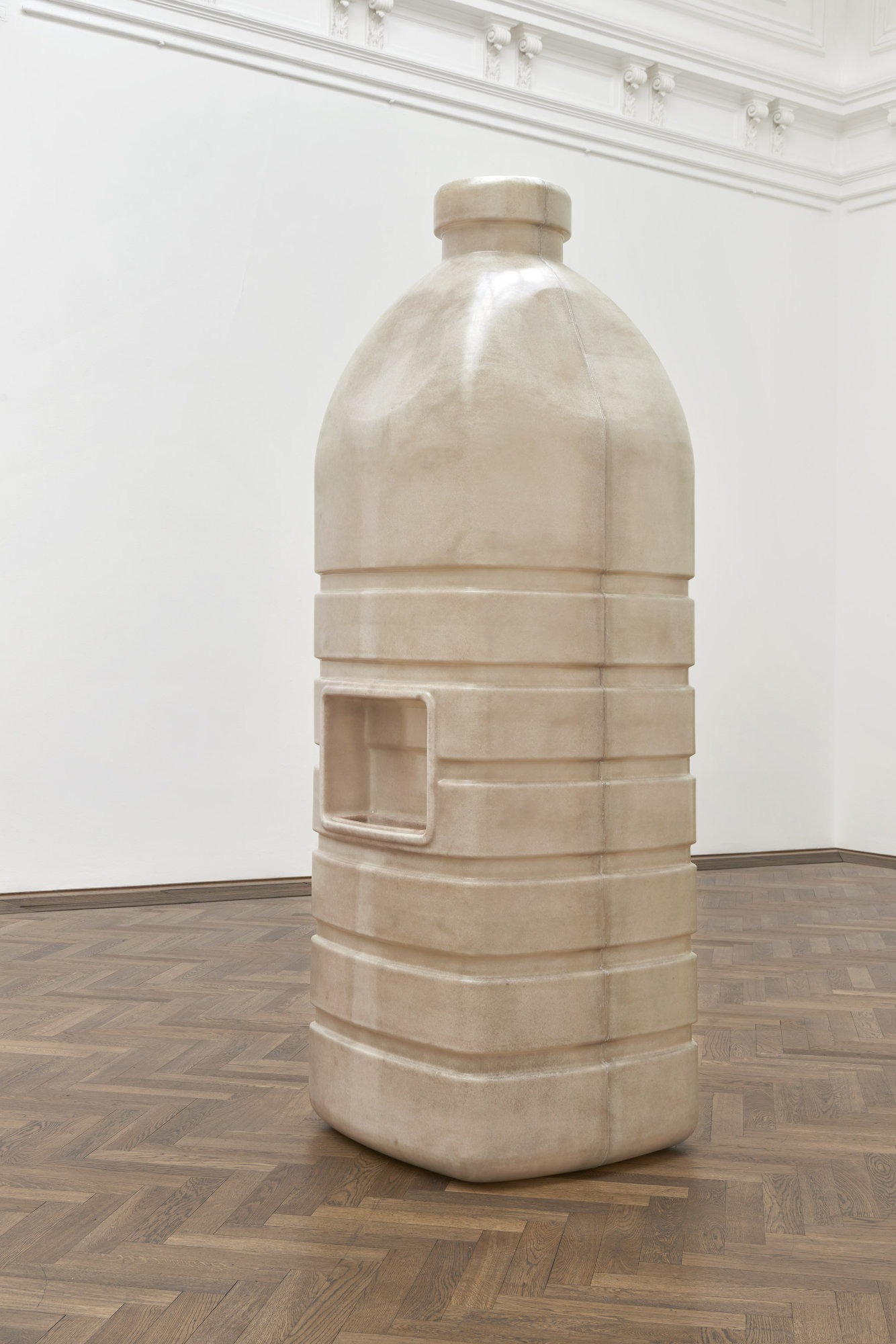 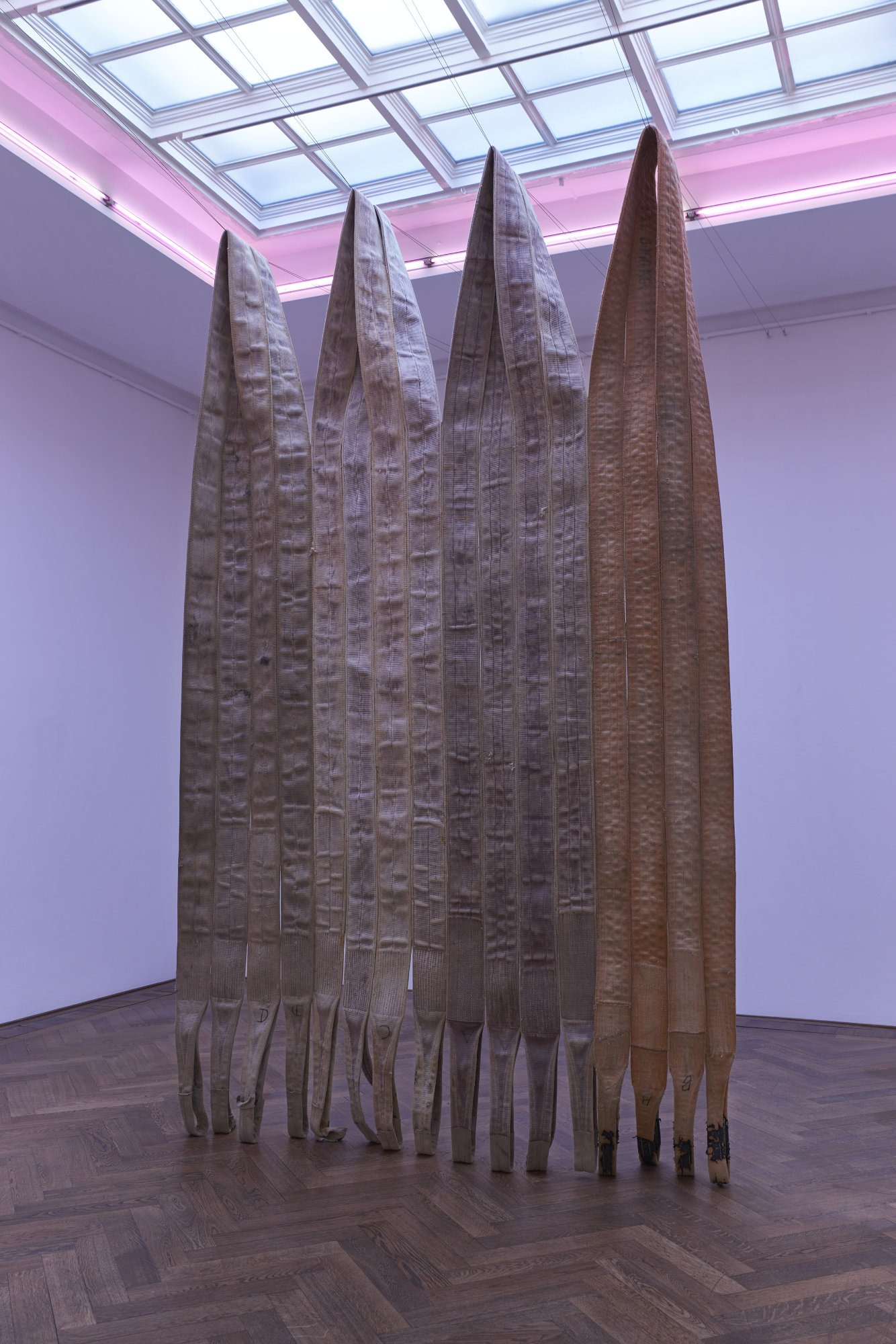 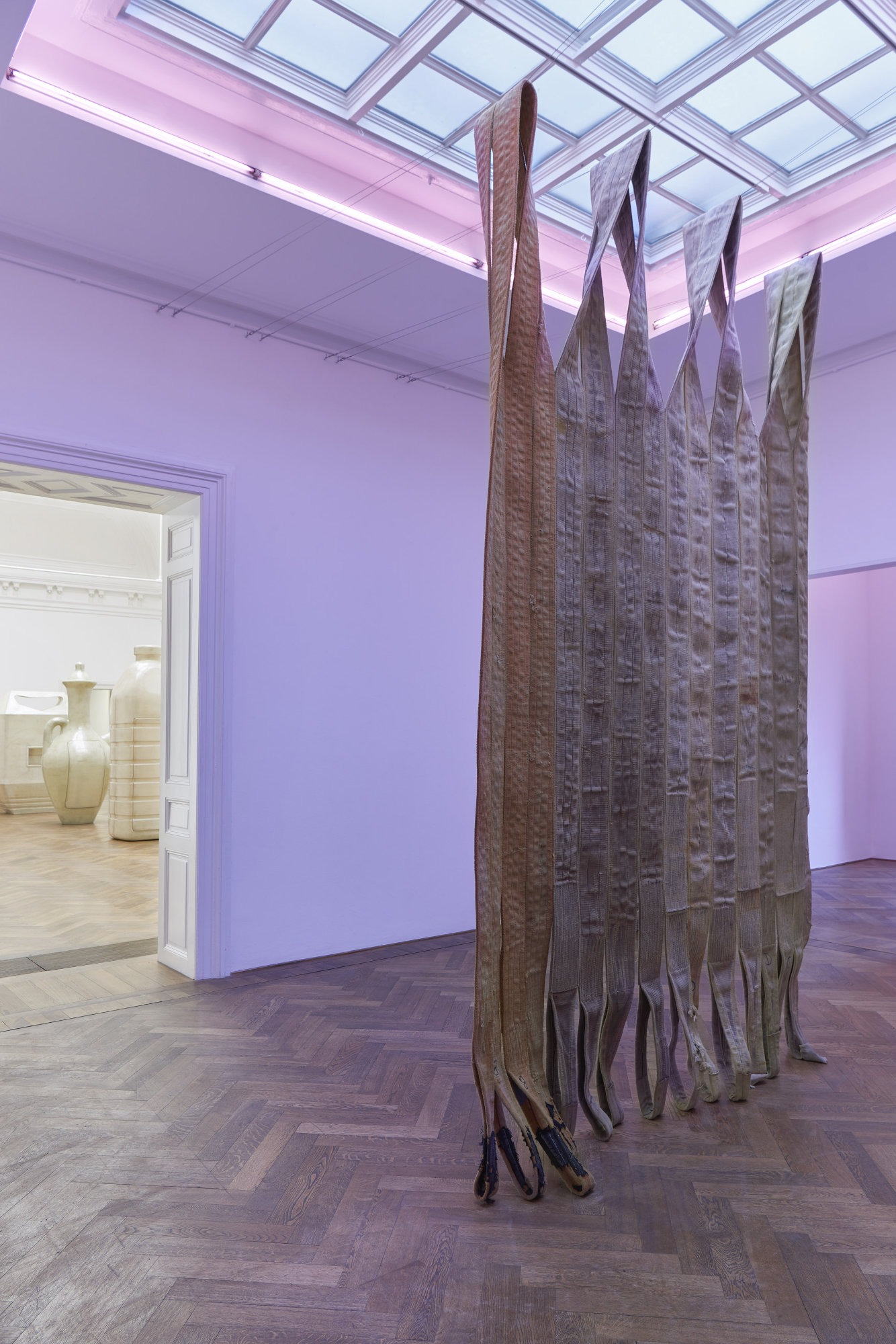 Installation view, Alia Farid, In Lieu of What Is, Kunsthalle Basel, 2022. Photo: Philipp Hänger / Kunsthalle Basel
“Thousands have lived without love, not one without water” British poet W. H. Auden famously wrote. It seems fitting to recall his words here, in an introduction to Alia Farid’s work because, in a certain sense, much of the art she has made in recent years comes down to love and water. Entwined with these basic human needs are the contradictory forces of conflict and nature, ideology and ecology, vulnerability and justice, and ultimately, the ways in which greed and vengeance—love’s antagonists—have historically weaponized water in the Arab world. It is this region and a complex of concerns on which the Kuwaiti Puerto Rican artist focuses her first exhibition in Switzerland.

Farid presents three bodies of new work: a series of monumental sculptures that imposingly stand, lined up, one after the other, in the main space, as well as a sound piece and a display of found textile harnesses to be encountered in the adjacent rooms. With a spareness that belies the complexity of the histories that she probes, the artist follows the trails of water as a political agent in the Arab region.

The first room of the exhibition features an installation of five larger-than-life vessels used to store and carry water—a globular copper lota, a plastic jerrican, a clay juglet with a small lid, a now-ubiquitous PET-plastic water bottle, and a ceramic pitcher. Farid’ versions are enormous but hollow and light, molded in lacquered fiberglass, colored like the desert sand and fabricated using the same method as the decorative casings for public drinking fountains that have become a distinctive feature of the urban landscape across the Arabian Gulf. Over the past few years, the artist has been working with commercial fountain producers to develop constellations of these sculptures (sometimes casting copies from existing molds, sometimes creating her own) as a way to intertwine a centuries-old tradition of public drinking fountains with the reality of water desalination in the region—the lack of available fresh water being an ecological consequence of government policies and the activities of industries that have prioritized oil extraction above nearly all else.

In Kuwait, a country with almost no natural water resources, drinking water no longer comes from natural springs and wells, nor is it any longer transported by traditional sailboats. Instead, with the advent of an oil-centered economy, the population has become almost entirely reliant upon desalinated water supplied through pipelines. Industrially extracted and channeled into contemporary stand-ins for village wells and other communal water sources, drinking water in Kuwait comes largely from desalination plants, as is the case in most Gulf countries. Their energy consumption is massive, and their salt waste is thrown back into the ocean, increasing its salinity and shifting an already fragile ecosystem. Yet what is a desert, if not a place in need of water? Follow- ing a centuries-old tradition, drinking water is freely available in the Gulf through public water fountains, known locally as ma’a sabeel (water fountain of the street), located on sidewalks, in front of houses and schools, on roundabouts, and along nearly every city block. In contemporary times, these water sources have taken on a variety of recognizable shapes—from sports equipment to architectural landmarks—resized to become either larger than life or, in the case of architecture, shrunken to a strange ersatz version of the original.

Inspired by these fountains, Farid’s sculptures, in a deliberately tautological move, assume the form of oversized water vessels. Historically, vessels mark the locations of human habitation. Vessels are found everywhere, in every culture, era, and type of settlement, among every social group. They are the single most common find on most archaeological sites throughout the world, their ubiquity providing a wealth of data. Analytical studies of the objects illuminate exchange networks, mobility, and the intricacies of social fabrics. Their shapes, types, decorations, and quantities re- flect peoples’ activities, tastes, ideas, and lifestyles. Given that Farid’s practice itself is akin to an anthropological excavation, a bringing to light, it seems fitting that she explicitly focuses on such containers. Through these, she unearths (and, in turn, shows us) cryptic signs of the nexus of water and power in our present.

Echoing through the last space of Farid’s exhibition is a sound piece in which a young man, Qasim, calls his buffalo back from the water. Qasim’s and other marsh dwellers’ way of life in southern Iraq has long been defined by the rearing of water buffalo, fishing, and reed cultivation in the wetlands at the confluence of the Tigris and Euphrates rivers at the Iran-Iraq border; for generations they have lived in isolation, sometimes on mounds in the marshes themselves, only accessible by boat. The artist recorded the sounds while in the Ahwar marshlands of south Iraq, during her first encounter with the strange particularity and power of these interspecies calls. The haunting sounds—between language, animal mimicry, and song—transmit a shared language between the human and non-hu- man. Like the documenting of a language on the brink of extinction, Farid’s recording of these extraordinary—and astoundingly efficient—utterances capture a sense of communion and communication that might soon be no more.

Throughout history, the wetlands and their people were deemed ungovernable. Residents of the marshes have posed a political challenge to every iteration of the Iraqi state because they insisted on autonomy from hegemonic rule, with the impenetrable geography of the marsh- es seeming to act as an accomplice in that effort. Unable to navigate or tame the wetlands, Iraqi presidents, kings, and colonial officials pursued destructive and coercive programs for social and ecological transformation through- out the 20th century, each to differently disastrous effects. In the 1980s, the marshes became one of the most brutal battlefields of the Iran- Iraq War. And in 1991, Saddam Hussein, Iraq’s controversial, despotic president in power from 1979 to 2003, intentionally drained the wetlands in retaliation for an uprising that began there and nearly deposed him. Desiccated, poisoned, and nearly destroyed—the marshes, their wildlife, and the livelihoods of those that populated the area were radically threatened. Its human inhabitants were arrest- ed, executed, “disappeared,” or forced into exile.

The story, however, didn’t end there. In a final twist, under the US occupation and UN re- construction following the 2011 end of the Iraq War, the “restoration” of the marshes became an emblematic public image of a new nation. But this act celebrated as ecological rehabilitation, actually facilitated multinational oil extraction for profit, serving as convenient cover for the expansion of US oil infrastructure. It became, in short, nothing less than warfare by other means, as anthropologist Bridget Guarasci suggests, and as the artist’s own probing inquiry has led her to understand.

The artist’s display of found textile slings was motivated by her thinking about the perpetration of such officially sanctioned violence. These industrial cloth halters and girth belts, often used in ports, on construction sites, for assembling pipelines, and generally, as practical implements for carrying weighty things, are faded and worn, dusty and marked by use. Displayed like archeological artifacts, as if precious civilizational evidence, they stand in for the harnessing of nature and the massive amounts of material moved and, consequentially, the colossal efforts to destroy whatever is deemed unruly or intractable. To Farid, they evoke the manifold manipulations of the state, but also of multinationals pretending to restore the region while lining their pockets along the way.

If the circulation of water can be read through- out her exhibition as a metaphor for the circulation of lifeblood, it is also a metaphor for the flow of capital, power, and violence. Across its three rooms and three bodies of interlocking artworks, In Lieu of What Is unspools a reality seemingly far from our own, yet intrinsically connected to ours not least by way of the petrochemical products we consume every day. The artist conjures a place riddled with complexity through the lightest of touches and in the hushed hues of its wind-swept deserts and marshy waters. There is a formal serenity to her project, despite the various injustices that instigated it; it asks us what would happen if respect, generosity, and care—in short, love—came in place of (in lieu of what is) repression, powerplays, vengeance, and profit margins. Farid, with Qasim’s tender interspecies call echoing in her head, asks us to try, for a moment, to imagine it.