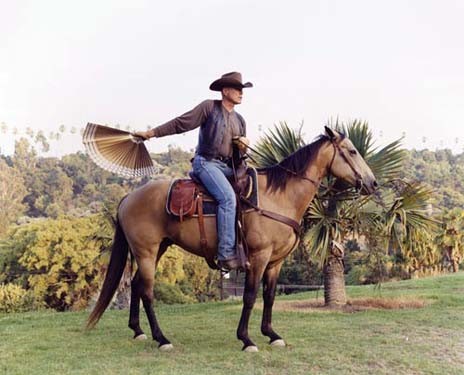 The photographs by artist Annette Kelm (born in Stuttgart in 1975, lives and works in Berlin) appear to perpetuate traditional forms of photographic representation in an unspectacular way: i.e. they comprise still lifes, portraits, object photographs, architectural and landscape photographs in moderate formats, which tend to be based on conventional studio or landscape practices. Annette Kelm works traditionally, her photographs are taken with an analogue large-format camera and are individual handmade prints. She produces both individual photographs and series of works with individual motifs and, in her exhibitions, she always shows a combination of works which refuse to submit to a single reading of a theme or concept.
Annette Kelm appears to follow conceptual and critical strategies in that she photographs objects, architecture and design which refer to historically significant correlations. At the same time, she undermines the promise of objectivity in her works by adding props that seem surreal or appear to belong to a subjective mythology. The subjects are often presented against a neutral background in the style of traditional studio photography. However, the background is so present that it becomes part of the foreground and the photographed objects themselves.
The motifs in Annette Kelm’s photographs are presented directly in frontal view; but the familiar elements and interpretations of conceptual, staged, documentary, analytical photography are undermined by means of an effortless trick: the real and the fictional, objectivity and emotionality, the presented and the suggested collage to form a new plane of what images can be and, perhaps also, the reality they depict.
At the Kunsthalle Zürich, for the first time ever in an institutional exhibition, the artist combines a group of over 40 photographs from highly diverse worlds of motifs. The works were created from 2001 and also include new works specially developed for this exhibition.
The back hoofs of a horse in the snow hit a record labelled by the artist, which is presented on brightly coloured fabric. A parrot is held by a gloved hand – suggestive of falconry – against a not quite adequate plant background. A cowboy on a horse in a garden setting brandishes a large fan like a whip, linking contradictory evocations of nature. Fried eggs are shown with hands holding money; or they combine with a tilting house, which the artist photographed in Bormarzo Monster Park, established near Rome by Vicino Orsini in the 16th century – the haunted house itself only becomes reality through the addition of a bearded woman in the window. Series of a palm tree at night, the branches of an orange tree, holed targets and the portrait of a girl in a hooded jumper, whose various angles do not reveal any more about the subject, are mixed with large-format reproductions of textile patterns by American designer Dorothy Draper, the picture of the first electric guitar photographed against an African-looking textile backdrop, which was produced in the Netherlands and bought in Paris. A water glass with a eucalyptus branch standing on a textile with Hawaii island pattern, which almost melts visually into the depicted object, is loaded with associations through the title After Lunch, trying to built Railway Trails, which refers to the failed attempt to produce the first railway tracks with eucalyptus wood in America and thus interweaves material, plant and historical knowledge in another story of longing. The artist also shows the first Wurlitzer, a mechanical organ, which represents the transition from the acoustic to electronic generation of music. She photographed the instrument in situ in juxtaposition with a Miró print, which she stuck to the wall of a museum of musical instruments. Other real places feature in architectural photographs: for example Frank Lloyd Wright’s Ennis House (Ennis-Brown House) of 1924, in which parts of the film Blade Runner were filmed, of which she presents two variants; day and night versions, whereby the night is not “real” night but a studio-generated night.
Annette Kelm’s works reveal both an interest in historical context, the history of industrial, craft and design and in questions concerning the artificial and the ambiguity historically experienced by cultural phenomena. Her photographs, which are realistic in their effect and oscillate between precision and ambiguity, transmit her motifs into a highly complex network of relationships, which are both visual and substantive in nature, in which constructive conflicts arise between what is shown and what is intended; thus seeing becomes more important than knowing.
www.kunsthallezurich.ch