The Art of Deceleration 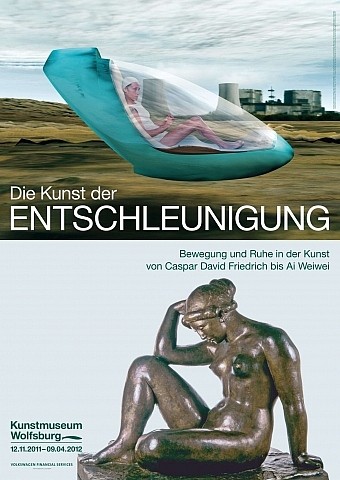 THE ART OF DECELERATION
Motion and Rest in Art from Caspar David Friedrich to Ai Weiwei
31 October, 2011 - 9 April, 2012

The history of modernism appears at first sight primarily as a history of acceleration. The development of ever faster means of transportation, shorter and more far reaching channels of communications in addition to optimized production methods have continuously increased the pace of life since the 19th century—up to and including the “rushing standstill” (Paul Virilio). Art has always represented the tip of this development that even kept the wheels moving in the form of avant-garde inventions and expansions—from Impressionism via Futurism, from Abstract Expressionism to kinetic art of the 1950s and media art. Little attention has however been previously paid to the fact that the fascination with motion has been linked to the pursuit of deceleration from the very beginning. As early as 1900, one spoke of an “Age of Nervousness.” Today, in the age of globalization, turbo capitalism and the Internet which accelerate our sense of time pressures, fragmentation and burnout, not only is the yearning for deceleration—for relaxation techniques, slow food or slow communications—growing but also the insight that process has to be decoupled from the link to acceleration: In order to move forward we must decelerate!

No other area sensualizes this dialectic of motion and rest better than modern art: At the same time that the Italian Futurists were glorifying velocity around 1910 in glowing manifestos and blazing paintings, their countryman Giorgio De Chirico contrived the world of metaphysical painting. The Kunstmuseum Wolfsburg explores this modernist dialectic for the first time in a comprehensive exhibition. Both thematic fields are made “antithetically” tangible by means of an accentuated selection of works. The idea of movement and acceleration was realized in a wide variety of manners in the works of such artists as William Turner, Auguste Rodin, Marcel Duchamp and Robert Delaunay, from Futurists such as Giacomo Balla, kinetic artists like Jean Tinguely, members of the ZERO group such as Günther Uecker as well as contemporary artists like Panamarenko, Nam June Paik, Christian Marclay and Bruce Nauman. Their range of their silent counterparts encompasses Caspar David Friedrich’s landscapes, the fantastic worlds of Odilon Redon and Max Ernst, the paintings of a Giorgio Morandi or a Mark Rothko as well as Mario Merz as a representative of Arte Povera and cinematic deceleration in the works of Bill Viola, Douglas Gordon and Tacita Dean.

Contemporary artists provide highly topical reflections on specific phenomena: Digitalization and the Internet led to a quantum leap in the global culture of communications. The last financial crisis (for the time being) is frequently interpreted as a consequence of the new velocity involved in conveying information. Julius Popp aestheticizes the acceleration of communications in the dot.com generation. Kris Martin deals with the search for meaning on the part of now disoriented jetsetters. A separate chapter is devoted to dealings with money in works by such artists as Aernout Mik, Andreas Gursky and Ai Weiwei. The accelerated growth of the population and cities is a further theme. The photographer George Osodi captures the diverse contradictory speeds of development in Lagos, a city of almost 10 million inhabitants. Anselm Kiefer’s giant painting projects on the other hand the vision of an uninhabited, mythical eternity into the future. Jeppe Hein continues the tradition of kinetic art (Tinguely) through interactions with the visitor. Jonathan Schipper inexorably lengthens the destruction of an icon of mobility.

The exhibition condenses a theme that touches a nerve in society by means of art, focusing with the polar concepts of acceleration/deceleration on numerous current problems such as time pressures, financial crises, ecological disasters, loss of control, the contraction of the present (Lübbe), the Internet tempo virus as well as stress and burnout syndromes. Oppositional attempts at a solution cannot, however, be the main concern. As the sociologist Hartmut Rosa says, what is lacking is “a new concept of progress and a succeeding life”—progress that does not play off slowness against velocity. It is helpful to recognize here that the history of modernism is also always a history of complementary tendencies of acceleration and deceleration.

The Kunstmuseum Wolfsburg therefore simultaneously condenses and casts open the theme by making itself available as a place of deceleration, providing time and space for reflection—a period of reflection that is increasingly lacking in our society. The catalogue and a differentiated accompanying program provide a platform extending beyond the framework of art for an ever more urgently needed discussion on the individual and societal yearning for deceleration from a philosophical, psychological, sociological, technological and neuroscientific perspective.
www.kunstmuseum-wolfsburg.de