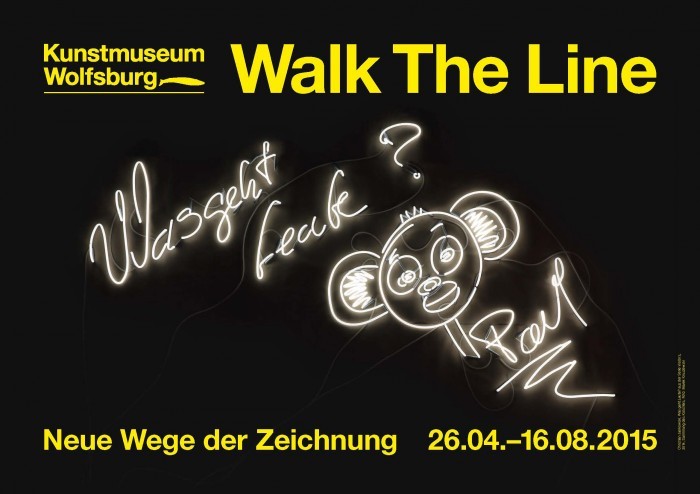 Since time immemorial, drawing has been called “thinking with a pencil.” Even though today it is increasingly known as “thinking with a mouse,” drawing continues to derive knowledge from the intriguing relationship between figure and field, pointing out what is primal about the artistic process. This exhibition provides a perspective of the medium of drawing as it is practiced today. With more than one hundred works of art by thirty-seven artists, the show presents genuine articulations of the line, between image and writing, alongside other strategies of drawing concepts. Ten artists have produced works specifically for this survey.

Since the mid-1960s at the latest, drawing has moved beyond its classic materials and techniques. Conceptual approaches and intangible processes have opened up the field. Not only does drawing have new types of surfaces, thanks to the use of new technologies, but it has also conquered space and penetrated the dimension of time. The exhibition reflects the development of these tendencies over the past fifteen years.

At the heart of this show are certain themes, some of which have long been closely associated with this genre, such as visual narrative, photojournalism, architecture, and the depiction of fantasy worlds. Yet the show also contains examples from areas that have only recently gained relevance. Among these are the abstract free line, the moving line in film and animation, the transformation of music into drawing, and concepts of drawing within the contexts of natural science and epistemology.

Was geht Leute? (What’s up, people?) is the question posed at the beginning of the show. Christian Jankowski’s latest work, from his series the Visitors (2010-2015), takes a comment written by a visitor in the museum’s guest book and brings it back to the museum. In the context of this exhibition, he asks what can be considered drawing today, and what kinds of insights can be developed from it. Above all, drawing today is characterized by the ability to reflect both old and new techniques—along with the potential they have for dealing with current content - in new paths in drawing.

The exhibition is accompanied by a catalogue featuring numerous installation views and an introduction to the exhibition by Holger Broeker as well as texts on the exhibited works (96 pages, ca. 50 color illustrations, publication date: middle of June 2015).
www.kunstmuseum-wolfsburg.de