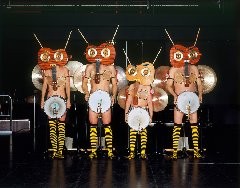 The group exhibition Experimenta FOLKLORE concerns the phenomenon folklore as a musical element within contemporary art production. The title of the project refers to the "Experimenta" series that was founded in Frankfurt in the 1970s and conceived as an international, experimental and boundary transcending theatre festival. It is considered to have been an important influence on the experimental music scene of that time.
Folklore can have both a mythical element as well as still contain the capacity to grapple with the worldly traditions of everyday life and the significance that advanced technology has in a post-modern world.
The project aims to relate, in a humorous manner, an understanding of tradition and modernity through the particular installations and performances of various artists (- groups); incorporating self-built instruments and costumes. Some of the artists’ projects in the exhibition will be questioning the importance that traditional customs, rhymes, rites and harmonies have in our present. Further, the technical achievements that form part of the research of sound sources is not placed in the foreground, instead it is the investigation of musical anthologies and new forms of staging pop-cultural events, traditions, styles and myths.
“Experimenta FOLKLORE” presents works of Olaf Breuning, Sung Hyung Cho, Marie-Clémence & Cesar Paes, Factotum, Jeremy Deller & Alan Kane, Uroš Djurić, Michael Dreher, Lilian Franck, Andy Holden, Honey-Suckle Company & Konrad Sprenger, Dani Jakob, juneau/projects/, Johanna Kandl/H. & J. Kandl, Kostüm Total (Alexander Györfi & Peter Holl), Thomas Kratz, Arto Lindsay, f.marquespenteado, Jonas Ohlsson, Georges T. Paruvanani, Claus Richter, Duncan Ross, Jim Shaw, Shimabuku and Nicole Wermers.
Accompanying the exhibition a journal designed by Duncan Ross will be published, that was realised through the kind support of the Georg und Franziska Speyer'sche Hochschulstiftung.

Additionally the following films will be presented: