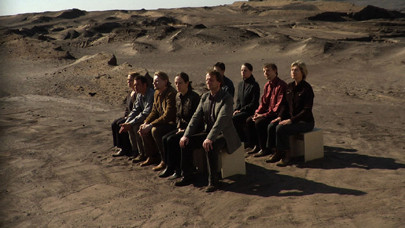 From July 10th to October 4th 2009, the group exhibition “Gemeinsam in die Zukunft” at the Frankfurter Kunstverein will be dedicated to artistic investigation of the relationship between society and community, between being governed and being autonomous. The initial starting point for the exhibition is the year of super election 2009. Accompanied by the 60th anniversary of the Federal Republic of Germany and the 20th year of the German reunification, it will reach a political climax with the Bundestag elections in September. This political mega event will govern the public sphere with provocative slogans and statements. The title “Gemeinsam in die Zukunft” (transl. “Together into the Future”) refers to a saying from the time of the German reunification and alludes to the abstraction of political areas of development into generic slogans on value.

The exhibition will present artistic positions that deal with suggestive appeals for group experiences and participation via various media such as video, installation or photographs –of the majority or of rebelling minorities. The works will show aesthetics of power and incantation and will contrast the rhetorics of inclusion with social realities of exclusion. The focus is the artistic description and revision of the relationship between the collective and the individual, between claimed and perceived community.