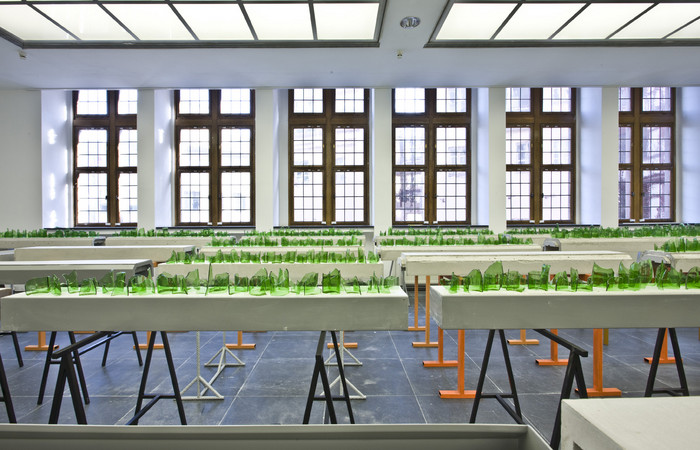 FRANKFURTER KUNSTVEREIN INSTALLATION VIEW IBON ARANBERRI: “DISORDER“
Photo: Norbert Miguletz
© Frankfurter Kunstverein 2008
Ibon Aranberri is particularly concerned with the relationships between society, politics and nature. Of importance to him are signs and objects, in which the mechanisms of society and their power structures become clear. Fundamental approaches to Aranberri's work are observation, background research, dialogue and documentation.
The body of work “Cave (Ir.T n° 513)” (2003), which will be presented in a large-scale situation in the Frankfurter Kunstverein, documents a long journey through prehistoric caves of the Basque region in north of Spain until the dramatic closure of one specific habitat. Besides this work, Aranberri also presents his sculptural installation “Floating Garden” (2004-o8). The work consists of series of modules made of concrete encrusted with broken San Pellegrino glass bottles. Although they are alienated from their conditions of daily usage they suggest the possibility to be utilised as prototypes for a fictional architecture and impart an idea of a poetic brutality in the mind of the observer. In his installations and through the use of documentary systems and the opacity of sculpture, Aranberri re-questions and researches the connection between politics and its manifestation in our environment, in society and art in public space.

The exhibition has been co-produced with the State Corporation for Spanish Cultural Action Abroad (SEACEX) and in collaboration with the Van Abbemuseum, Eindhoven.