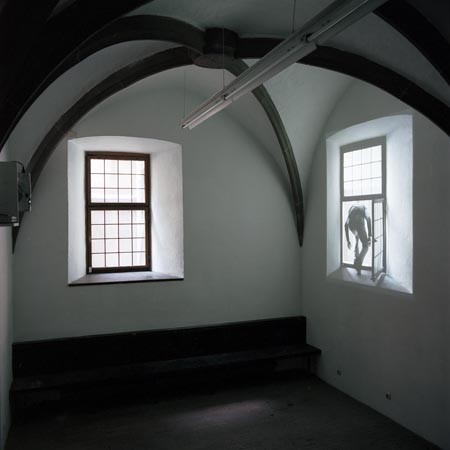 Until June 14, 2009 the Frankfurter Kunstverein presents a new site-specific video projection by Sebastian Stumpf, especially designed for the exhibition space. The projection is part of the exhibition „Talents 2008“ curated by Felix Hoffmann at Neue Börse which runs until June 6th 2009.

Starting point for Sebastian Stumpf (*1980) are rooms and spaces that he confronts with his own body. His interventions are recorded on video or photographs and afterwards projected onto the gallery walls. Whilst acting in front and behind the camera, Stumpf withdraws himself from the gaze of the camera and challenges the borders of architectural spaces. He’s not only interested in urban city landscapes but also in white, empty exhibition spaces, which he uses to find vents and connections to other spaces. In his projection at Frankfurter Kunstverein it is the single window in the exhibition space that Stumpf refers to by movement and presentation.

Sebastian Stumpf, who lives and works in Leipzig, studied at the Akademie der Bildenden Künste in Nürnberg and at Hochschule für Grafik und Buchkunst in Leipzig, where he studied photography under Prof. Timm.

The presentation of Sebastian Stumpf take place within the framework of the Deutsche Börse Residency Program and is a cooperation with C/O Berlin, Forum for Visual Dialogues together with Deutsche Börse.
www.fkv.de