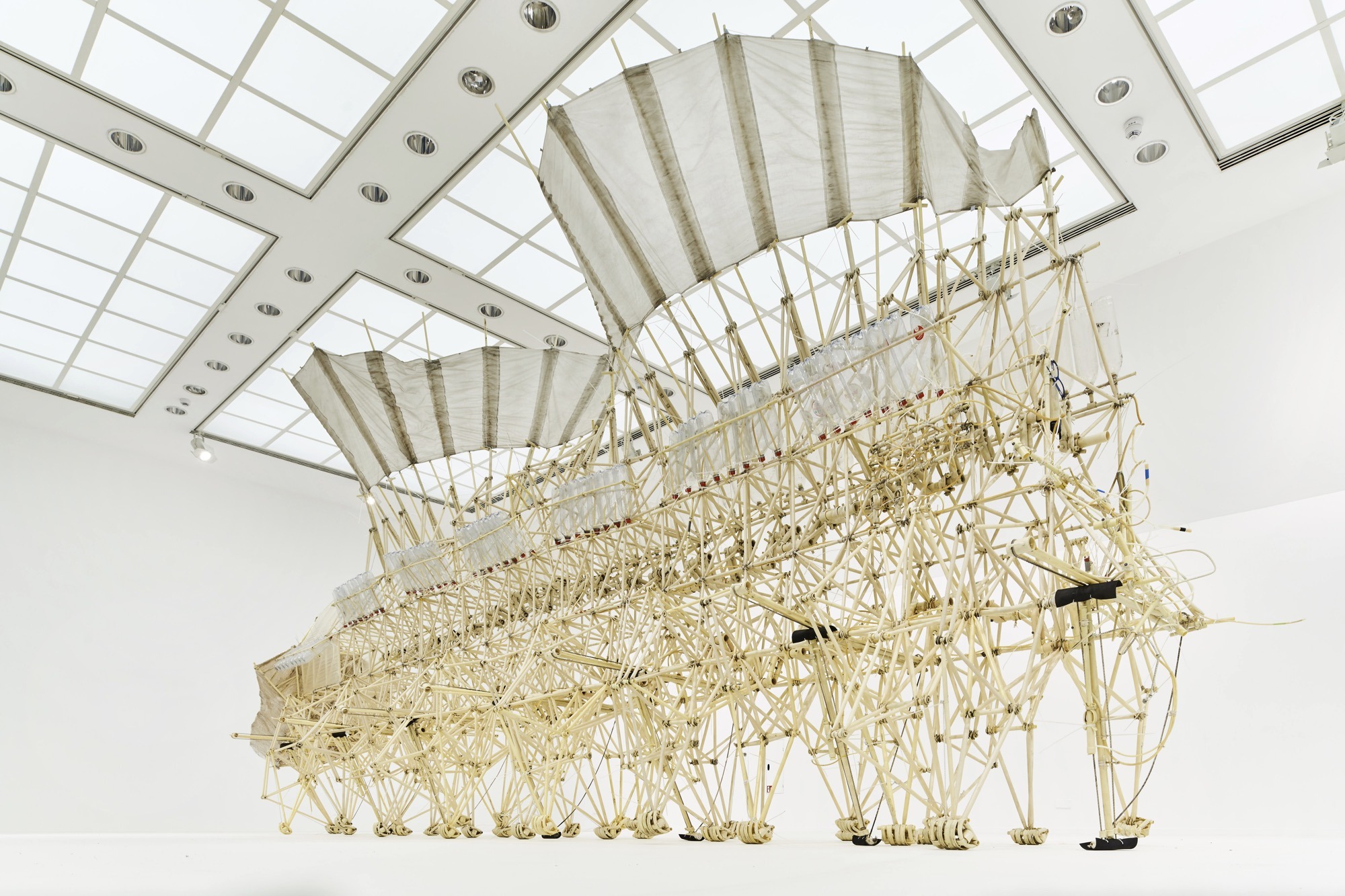 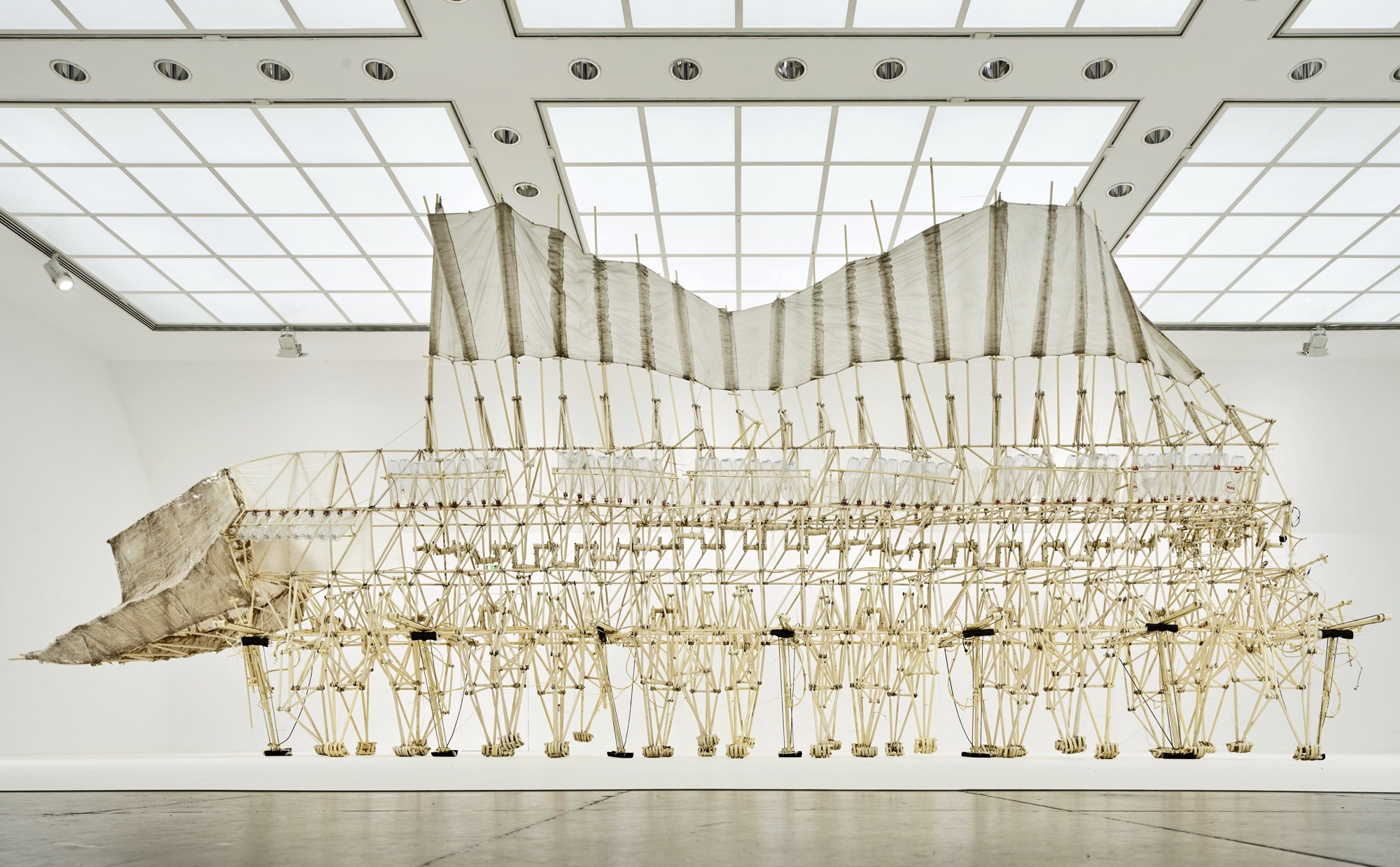 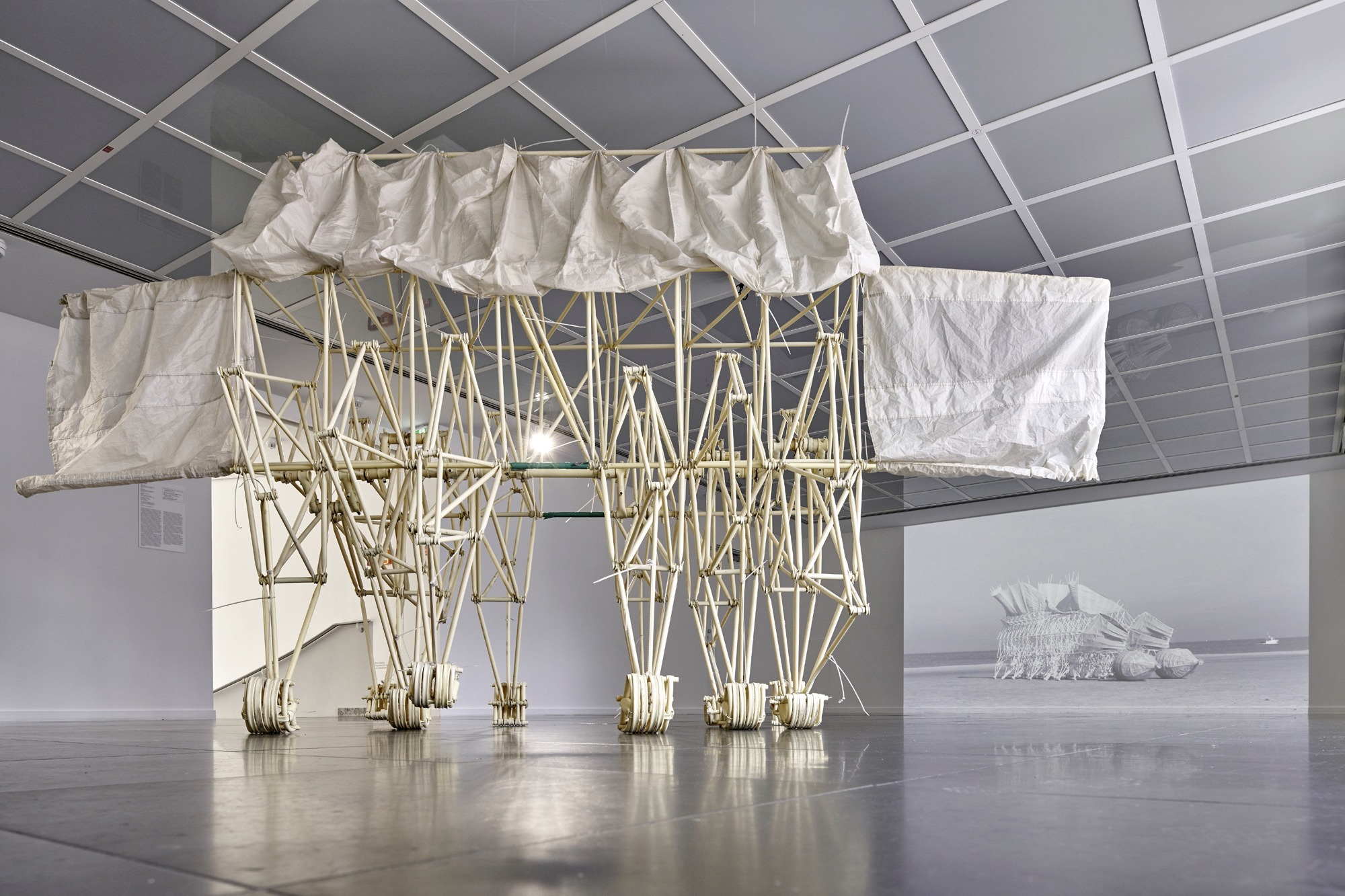 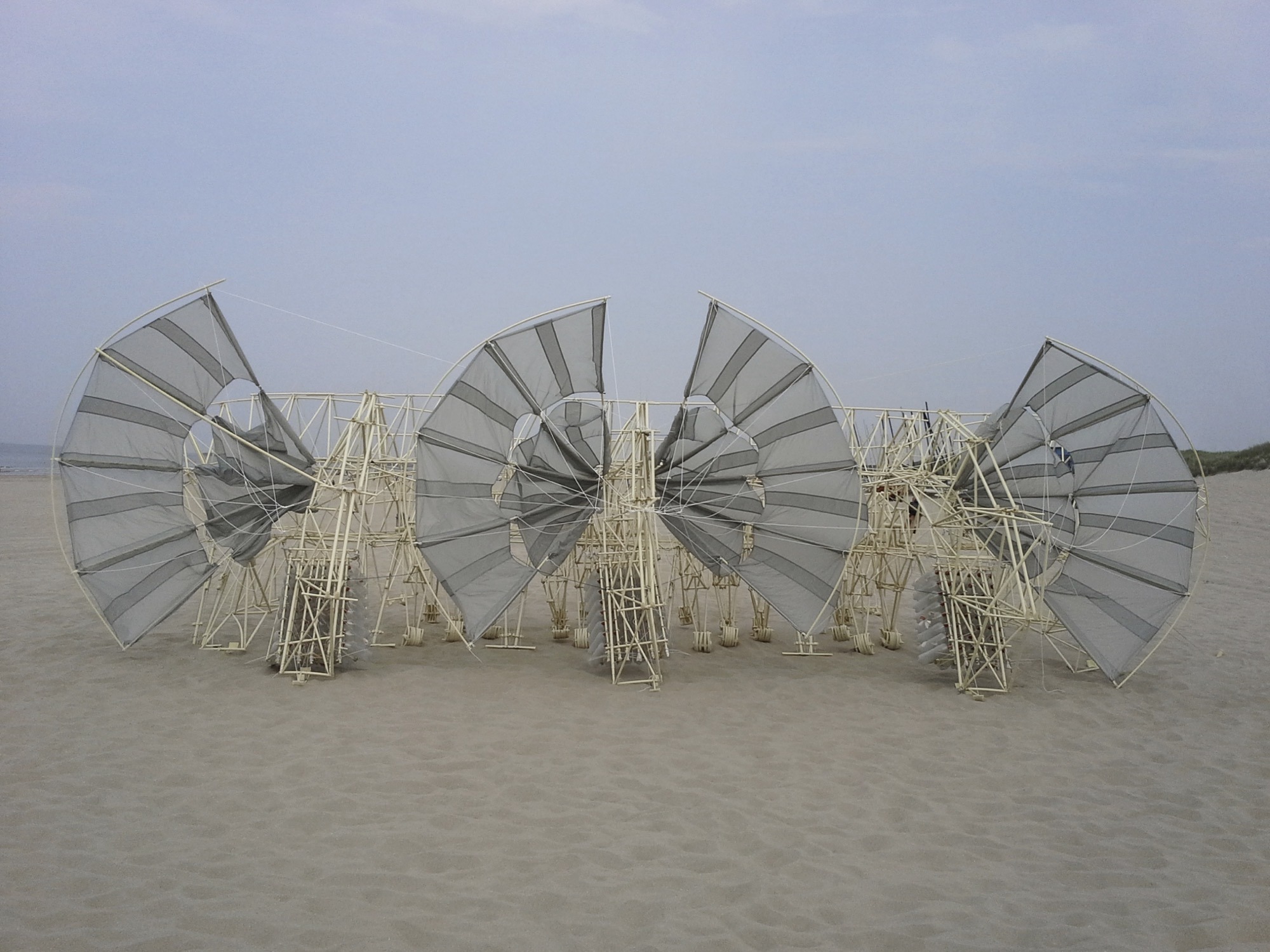 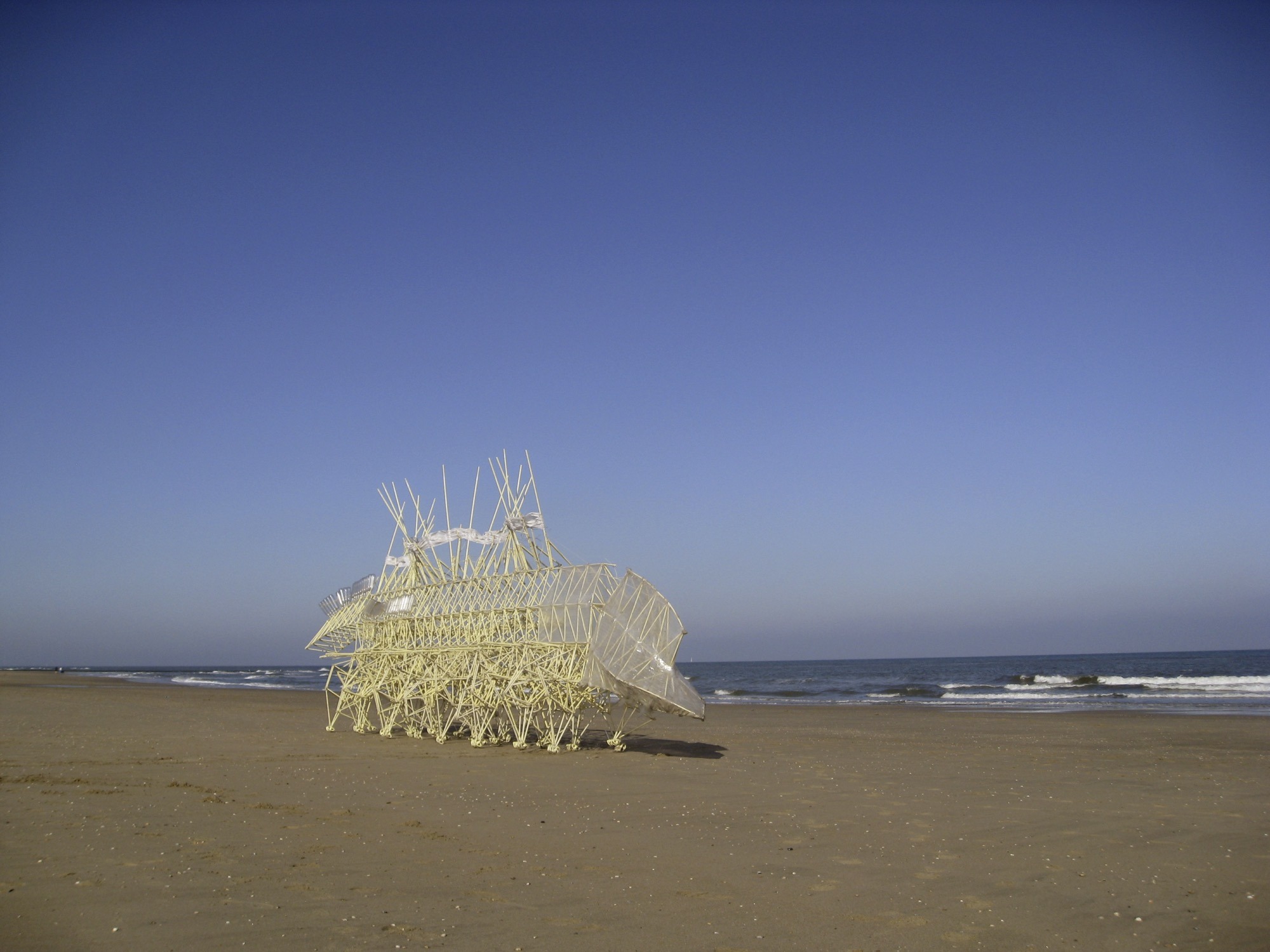 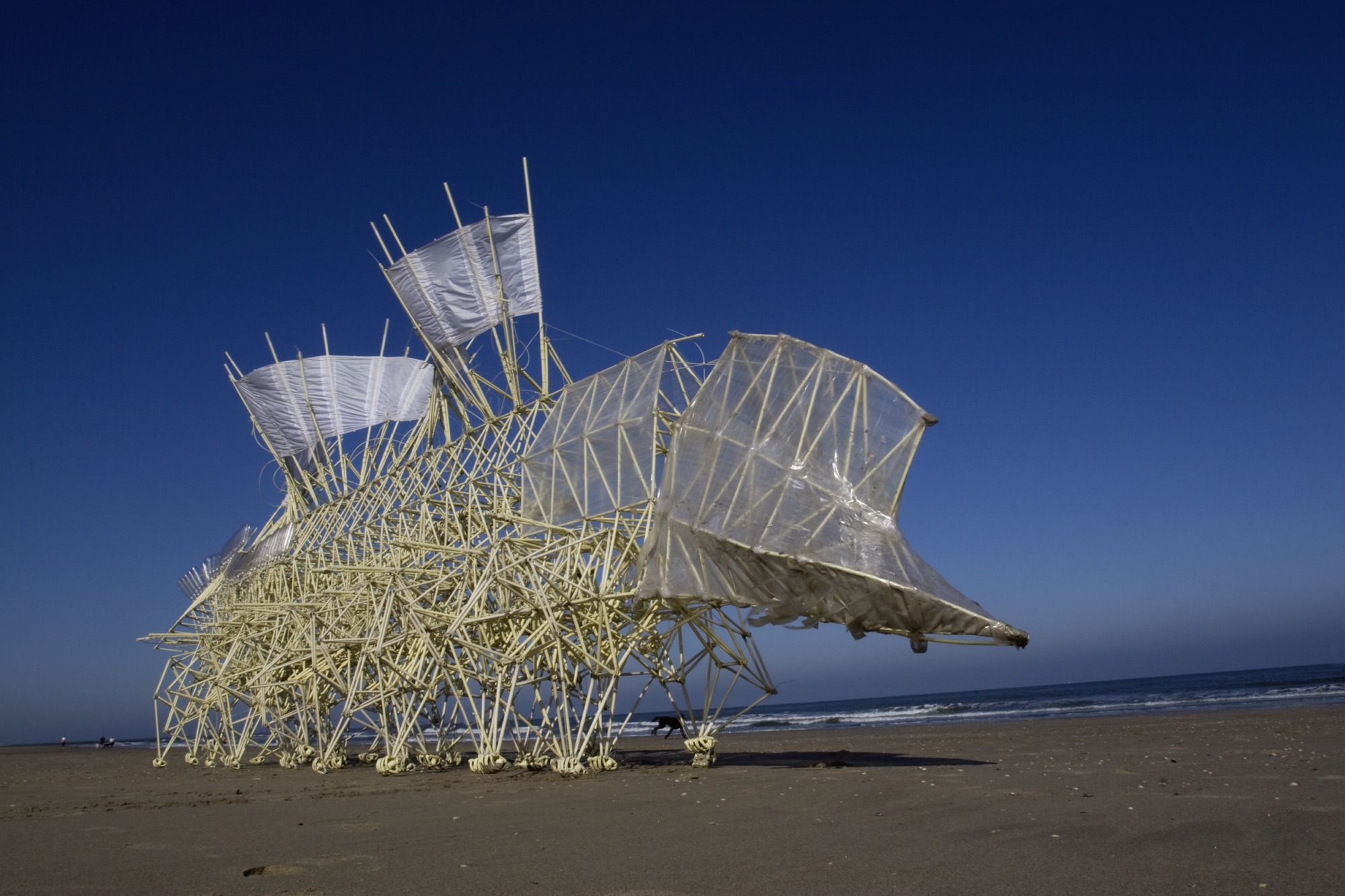 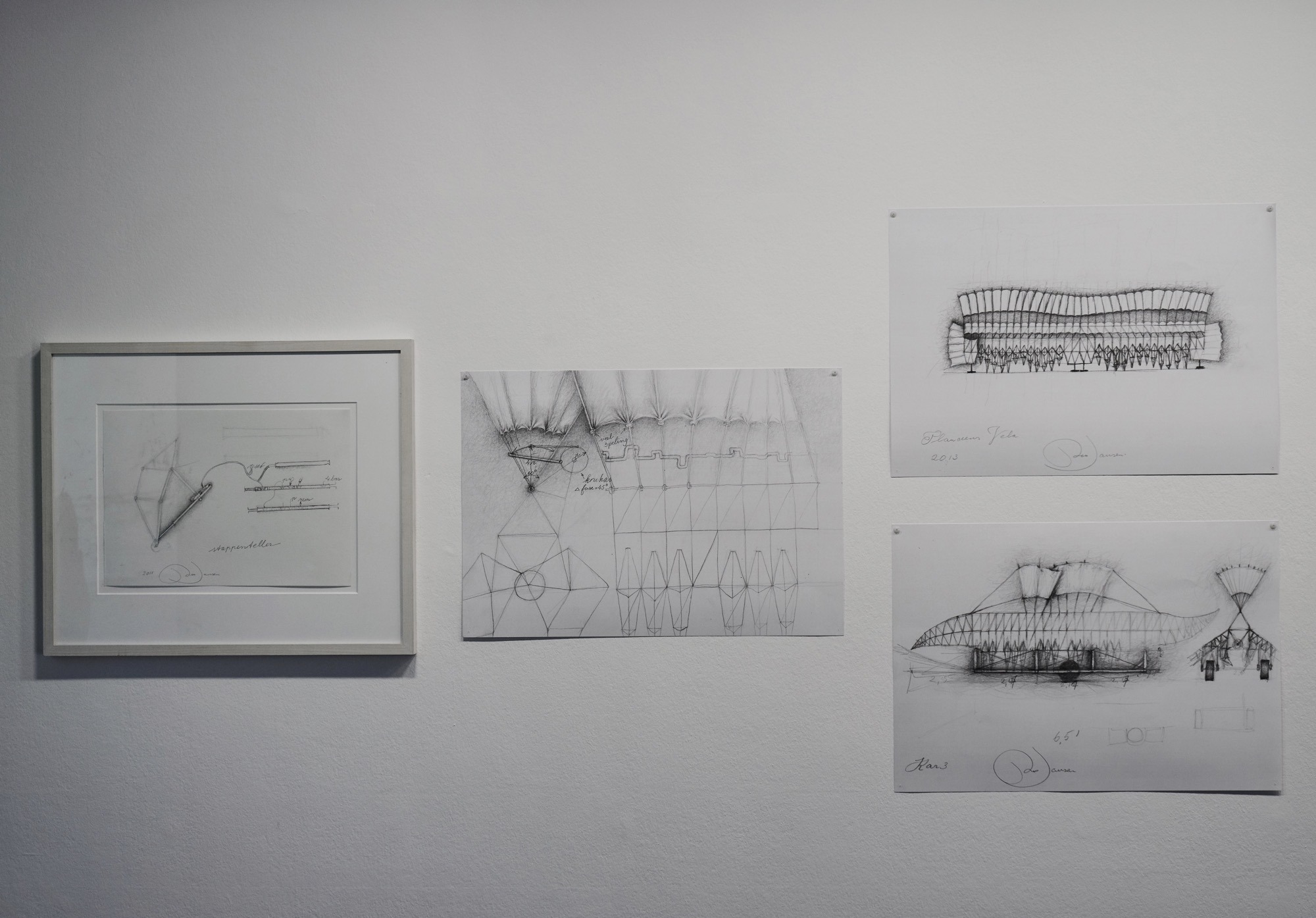 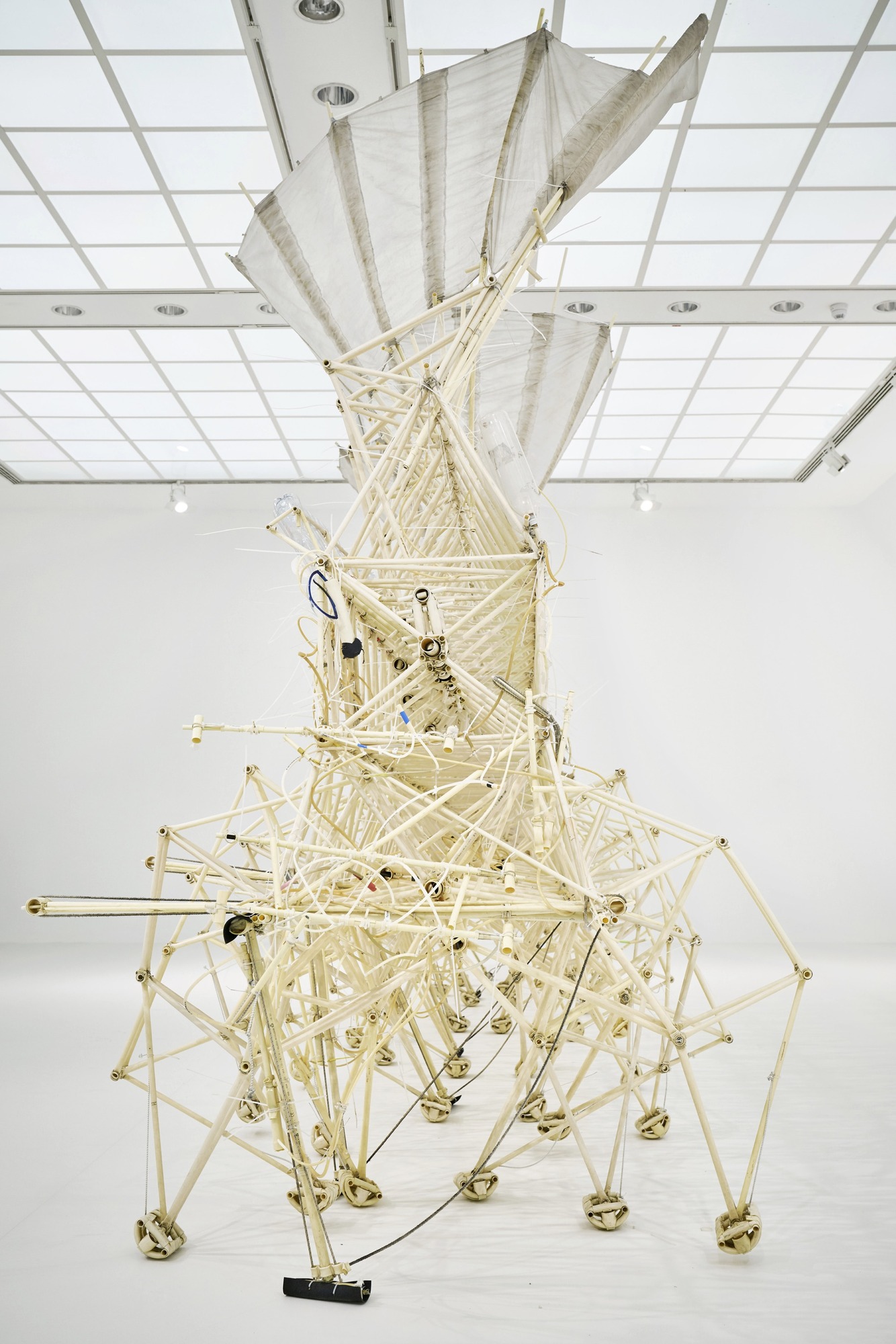 With his kinetic sculptures, Theo Jansen pursues his vision of creating new artificial life forms. The exhibition at the Frankfurter Kunstverein presents two of his creatures, the so-called “Strandbeests”, “Umerus” and “Ordis”. Drawings and technical sketches visualize the mathematical equations that the machines’ movement mechanisms are based on.

Jansen has succeeded in bringing non-biological creatures made from industrial materials to life that evoke the impression of living beings for the viewer. It is their movements that elicit an emotional reaction in the viewer and serve to amaze them. The uniqueness of the forms lies in the fact they develop independent movement from wind power alone. Jansen calls his constructions “Strandbeests” because he creates them for the specific environmental conditions of a beach. Jansen continually creates these constructions with ever developing capabilities. He labels each form as a separate genus, giving them Latin names in the style of a scientific approach. “Ordis” is derived from the conjugated Latin verb “you begin,” and “Umerus” from the noun for shoulder.

Theo Jansen’s exhibition is presented on the upper floor of the Frankfurter Kunstverein. One of his largest kinetic sculptures, “Umerus” (12 x 2 x 4 meters), is in the great hall. “Umerus” will be periodically animated by compressors. In the other space Jansen is showing the sculpture “Ordis” (2 x 2.30 x 1.70 meters), which visitors can move with their own strength, offering a physical experience. Drawings and technical sketches complete the presentation by visualizing mathematical equations that describe the workings of the machines.

Theo Jansen studied applied physics at the Technical University in Delft. He has been creating his works in the context of artistic practice since the 1990s.

The origins of Jansen’s “Strandbeests” come from a computer program that he developed in 1991. This system is applied to all his works so the Jansen movement principle has become internationally renowned. In 2016, NASA invited Theo Jansen to participate in a think tank to develop potential projects for autonomous engines that could be deployed in future space missions to Venus. Jansen has a worldwide community of admirers who use the unique mechanisms of his works as a starting point for the further development of fundamental ideas and forms in the fields of science and art.

Jansen uses yellow plastic tubes, cable ties, and plastic bottles as raw materials in his work. Each “leg” has a crank system with 11 tube parts. The tubes are perfectly coordinated so that the creatures’ movements glide along a horizontal line. By storing wind, the kinetic structures can even move without an external energy source for a short period of time. Wings pump air into empty PET bottles that serve as the creatures’ body parts. The proportions of the tubes are pivotal for the motion sequence. The creatures’ so-called “brain” consists of a step counter based on a binary system that allows the sculptures to interpret and respond to their environment like primitive creatures. “Umerus’” system is based on a series of empty bottles filled with air. When the creature enters the water, the bottles fill up with liquid instead, changing the function of the binary system and reversing the running of the machine. This is how “Umerus” perceives its location in the world; it locates itself in a certain position and derives an idea of ​​where the danger of the surrounding sea is, as well as the remaining landscape. In a general sense, one could speculatively ask whether the machine produces its own—albeit simple—conception of ​​the world.

Jansen has continuously developed his “Strandbeests” over the years. In a few years, according to Jansen’s vision, they should be able to exist in nature both independently and in groups. Although they do not have any metabolic processes, nor do they reproduce autonomously, in their ability to move and react to environmental conditions Jansen sees the basic characteristics of artificial life, which he continues to develop.

His creatures’ movements usually trigger a fascination in the viewer based on the idiosyncratic nature of their complex movement patterns, which appear organic and reminiscent of living beings. The structures are clearly recognizable as artificial, yet they evoke the organic walk and motor skills of long-legged insects, or caterpillars in the case of some creatures not shown.

Jansen’s creatures are reminiscent of archaic skeletons that dwell aesthetically somewhere between biomorphic and inorganic growth forms. Although Jansen’s constructions are obviously lacking intellect and free will, and he clearly remains the human author, their autonomous motion processes make one forget this. Movement becomes the characteristic trait of the living. At the same time, the viewer develops the assumption—through emotions and cognitive knowledge—that motor skills are the attribute of a living being.

In their uniqueness the creatures stand as novel aesthetic forms. The power of Jansen’s work is that they are free of any function; their actions are unintentional. They repeat the unchanging action of progressing in space and time, of walking on, drawing their power from the wind alone. They are independent of the metabolism of a living body and independent of the energy supply of a machine. They are creatures of their own form. What fascinates viewers is that they act without an awareness of the principals of their own mortality. They exist and do not fear their own decay. They follow their inner program and purpose without understanding these as fate. It is the viewer who can recognize something in their form that the creature does not posess itself. Their physique and their physical nature have been created by Jansen in such a way that their effect on the viewer unfolds on several levels simultaneously: the cognitive and the emotional.