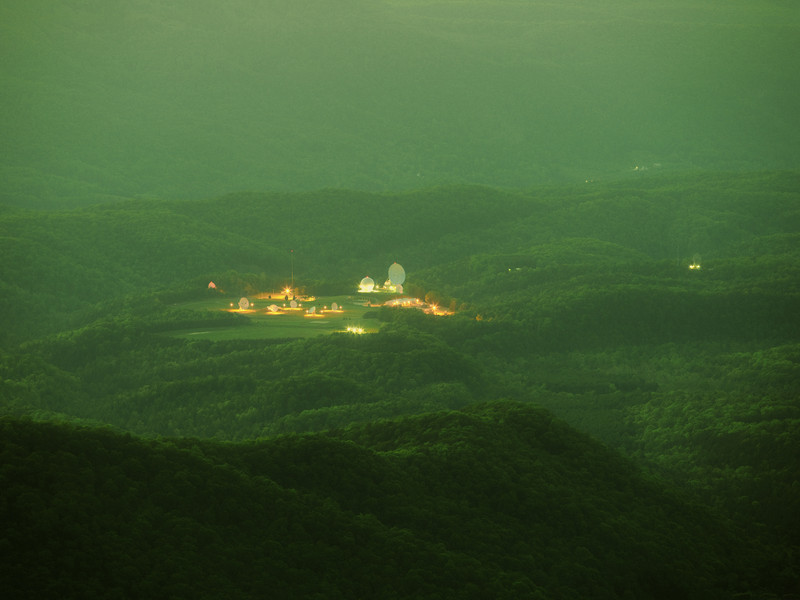 „They Watch the Moon“, 2010 © the artist Courtesy Galerie Thomas Zander, Köln
The Frankfurter Kunstverein presents The Octopus, a comprehensive exhibition of work by American artist Trevor Paglen (born 1974 in Maryland, USA) that deals with topics such as surveillance and political influence. From June 20 to August 30, 2015, the exhibition will show new production and video works along with extensive materials and documents from Paglen’s investigatory research practice in addition to a wide range of existing images and photography series,. Together with his new participatory work "Eagle-Eye Photo Contest: Landscapes of Surveillance," a photo competition initiated for the exhibition, the sculpture Autonomy Cube, an open Wi-Fi hotspot, illustrates Paglen’s new artistic approach: he would like his work to trigger actions that have an influence on society and that reach out beyond the institutional spaces of art into the real world. The photographs entered in the contest will be presented in the exhibition. Trevor Paglen will receive the German Photographic Association’s (DGPh) cultural prize for his work on June 21, 2015 at the Frankfurter Kunstverein.

Ever since the revelations of former NSA contractor Edward Snowden initiated a global surveillance scandal in June 2013, the media have reported almost daily on U.S. intelligence agencies’ the hunger for data.. Functioning spy networks, data leeches like Facebook, Google and co., and the extension of European security agencies’ data retention and surveillance powers have also been the focus of worldwide coverage. While the NSA scandal has only recently brought the subject of surveillance via private data storage into the forefront of many citizens’ minds, the American artist Trevor Paglen has been investigating this issue for more than a decade..

The artist, who also worked as a researcher and cinematographer on the team for "Citizenfour", the 2015 Oscar-winning documentary about the Snowden affair directed by Laura Poitras, photographs secret locations of the NSA and CIA, covert military bases, supply routes to secret prisons or hidden listening stations, and trajectories of secret surveillance satellites and drones.

Trevor Paglen can be described as one of the most important representatives of landscape images in the age of Big Data. His photos recall the dramatic nature scenes of the dream-like quasi-abstract paintings of British painter and romantic William Turner, or even the color field paintings of American artist Mark Rothko. On the other hand, his political and investigative approach recalls one of the most prominent representatives of politically engaged art, the German conceptual artist Hans Haacke. It also places him in proximity with American artist Mark Lombardi, who aestheticizes political-economic power structures. In his conceptually interconnected photographs, videos, books, and actions that criticize surveillance, Paglen allows the techniques and structures of politics and power to become visible. He works like an investigative journalist: through lengthy research and in collaboration with activists, scientists, computer scientists, amateur astronomers and technicians, he is able to track down and make visible government-mandated and undemocratically legitimized monitoring and surveillance.

Paglen tracks the technology and infrastructure needed for monitoring and surveillance in the series Untitled (Drones) (2010), The Other Night Sky (2007), and Limit Telephotography (2007), all of which are on view in the exhibition. Paglen attempts to capture images of surveillance satellites, drones, or communications intercept stations, in many cases for the first time ever. In doing so, he raises the following question: if secrecy has become a way for organizing human activities, how can this be made visible? Digital, globally active surveillance programs require data centers, offices, technologies and a vast network of people and material resources. Through his work, Paglen demonstrates that secrets are not invisible, but rather constitute an organizational form. His political work leads to artistic work that places the focus on a new way of seeing.

Paglen’s photography from the multi-part series The Other Night Sky (2007) combines a documentary approach with a theoretical media and photography discourse. He utilizes the stylistic devices of photography such as blurring, exposure time and zoom to emphasize to the content of his motifs and reflects on the act of seeing and the new optical apparatuses of surveillance. The images in the series evoke initially harmless associations, reminiscent of natural spectacles in the night sky: patches of red mist, trails of shooting stars, or even the trajectory of a comet. Paglen's telephotography actually shows American spacecraft, among other things, including the satellite KEYHOLE 12-3/IMPROVED CRYSTAL, which is equipped with facial recognition software and which collects recordings of people and activities from space. At the limits of abstraction, his images refer to the reciprocal relationship between seeing and being seen and to the questionable nature of the image itself.

In addition to showing Paglen’s extensive investigative research activities based on wide-ranging materials and documents, the presentation of his new artistic approach plays a central role in the exhibition: Trevor Paglen would like his work to trigger actions that have an influence on society. Thus, the photo competition "Eagle-Eye Photo Contest: Landscapes of Surveillance", which took place in the run-up to the exhibition and was conceptualized together with the artist, called on the general public to actively participate in an extensive photo documentation of the landscapes of surveillance in Germany. The photographs will be on view in the exhibition and the winning photographs will be published in the Journal Frankfurt. The project Autonomy Cube (2014) has arisen from a close collaboration with Internet activist and computer security specialist Jacob Appelbaum, The sculpture combines a formal and a functional dimension. The cube provides access to the Internet via the so-called Tor network, a network run by volunteer users that renders connection data anonymous. By presenting the Autonomy Cube sculpture to the public, the Frankfurter Kunstverein becomes part of a privacy-oriented citizen-based Internet initiative.

Trevor Paglen: The Octopus is a project of the Frankfurter Kunstverein.
The exhibition takes place within the scope of the RAY 2015 Photography Projects Frankfurt Rhine/Main and is also a collaboration with the Cluster of Excellence "The Formation of Normative Orders" at the Goethe-Universität Frankfurt am Main. The exhibition’s media partner is the Journal Frankfurt.