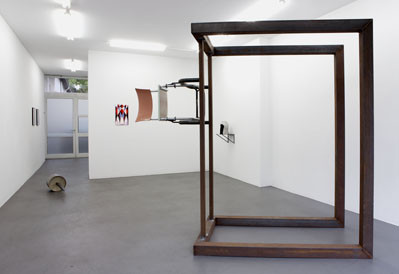 The title of the exhibition »Ground Control to Major Tom« refers to a repeated line in David Bowie’s 1972 song, ›Space Oddity‹, and serves as the pivotal point for an exhibition, which correlates the works of Sonia Leimer (*1977, Meran), Stef Heidhues (*1975, Washington, DC), Alexej Meschstchanow (*1973, Kiev), and Bernd Ribbeck (*1974, Cologne). The song addresses the human desire to explore unknown worlds, as well as the loneliness of the individual and the sense of being lost in the unfathomable universe leaving us only with the one certainty – that the larger questions of life cannot be answered.

The four artists explore the connection between space and time, the relationship of man and space, spaces of identity, everyday and foreign worlds, abstract and spiritual picture spaces or the relationship between real and fictitious space.

The coalescence of various places and times as well as the overlapping of fiction and reality is a central theme in Sonia Leimer’s work. The silkscreens presented in the exhibition, connect fabric remnants of a space suit that is still in the process of development with 1965 satellite images of Mars. That which is close and that which is inconceivably far as well as the past, present and future are thus being synchronized, causing our understanding of a linear space-time continuum to warp. With this work, the artist furthermore refers to a medial intermediation that moves between reality and fiction. Through her presence, Sonia Leimer’s sculpture »Platzhalter« [Placeholder] fills the space similarly, yet at the same time seeming to mark a fictitious or undefined space.

The works by Alexej Meschtschanow also distinguish themselves through an enormous physical presence. By displacing massive materials the artist visualizes the force of gravity revealing, at the same time, a vulnerability and melancholy which finds its expression in fragments like artificial limbs and through the thematization of presence and absence. »Stuhl 9DPlus« [Chair 9DPlus] shows a heavy iron construction in connection with a suspended chair. Meschtschanow’s works oscillate between the familiar everyday and the uncanny foreign, inspiring our curiosity and possibly paving the way into a new still unknown world.

Contradictions in form and content also characterize Stef Heidhues’ work – however, the artist always maintains a suspenseful balance between these antagonistic elements. The re-defining of materials is a central aspect of her pieces, as much as the relationship between object and space. In the exhibition she presents works from the series »Helme« [Helmets], but while the function of a helmet is to protect the head, Heidhues’ helmets formed from ceramics are themselves fragile. Every exemplary of the »Helme« is a hybrid, in which various epochs and variants of head protection meld with each other, exploring the ambivalent impact of protection and threat. The interior of the helmets has a dark glaze, but in contrast to Henry Moore’s helmet sculptures, remains empty – the interior marks an empty space or, as in Sonia Leimer’s work, a placeholder for an identity which is created by our imagination.

Bernd Ribbeck presents works in ink on paper as well as paintings with acrylic and pigment marker on MDF. The paintings evolve in an elaborate work process during which the color is applied, polished, scraped off, and again applied causing the works to move between destruction and order. They appear hermetic, but at the same time they create endless spaces. Despite the purely abstract representation of geometric forms and variegated color applications, the compositions are reminiscent of architectural spaces or cosmological constellations and open up spiritual spaces that captivate the viewers, projecting them into the infinite vastness of the cosmos and simultaneously back onto themselves.

Man’s urge and wish to explain the unexplainable is not only rewarded with answers but also creates a new pool of questions wherein in some instances, even the purely scientific mind may open towards the spiritual. The presented works stand in that place of interplay between that which can be understood and that which cannot be explained, between physical and psychic space.

We would like to thank Galerie Kamm, Galerie nächst St. Stephan and Klemm’s.
www.scharmann-laskowski.de