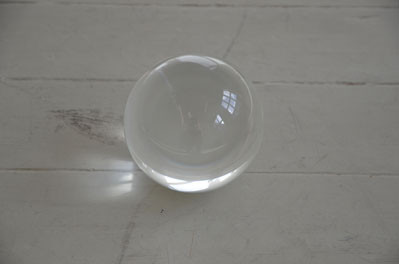 »19 Truths« is the title of Anja Ciupka’s (*1975) work consisting of 19 fortune teller crystal balls lying on the floor that can be touched and picked up. Her works are subtle, often fragile, but always expansive, occupying space subversively. She takes an ironic look at sociological connections, which are metaphorically depicted by the constantly changing reflections of the glass balls. »19 Truths« is also the title of the exhibition, bringing together work by different artists all dealing with the subject of ›space‹, presenting diverse artistic approaches and perspectives.

Mystery and morbidity pervades Kathrin Ahlt’s (*1976) photographs as well as Daniel Behrendt’s (*1980) paintings. Both depict details of the urban landscape revealing the uncanny and starting points for cinematic stories in apparently romantic pictures or in the grey everyday .

The urban landscape is also seen in Carolina Redondo’s and Christine Rusche’s works. Tirelessly employing her whole body Carolina Redondo (*1977) exposes in her video work the relationship between inside and outside, between veiling and unveiling. In Christine Rusche’s (*1971) drawings with ink-pen on print-film the real space seems to be fragmented and concentrated into an image, into two-dimensionality. In her pieces space and surface are in constant interaction, just as in Christina Kramer’s works. Christina Kramer (*1979) creates spatial drawings through layering and finely nuanced printing techniques – real and fictional space, drawing and object are placed in correlation to each other.

Dafni Barbageorgopoulou (*1977) converts painting and literature into sculptural shapes analyzing symbolic systems and the narrative structures of dreams and journeys, whereas Eilike Schlenhoff (*1984), in her paintings, exposes the world as a stage that is simultaneously a figurative and pure painting. Subversive and humorous interventions into the given spaces characterize the work of Maik and Dirk Löbbert (*1958 /*1960), presenting a minimal intervention into the gallery space, wittily reflecting art history while critiquing the art market.
www.scharmann-laskowski.de