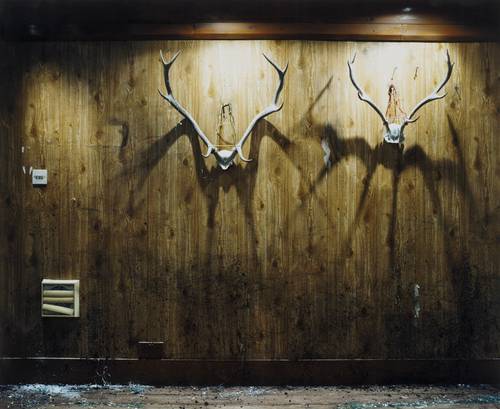 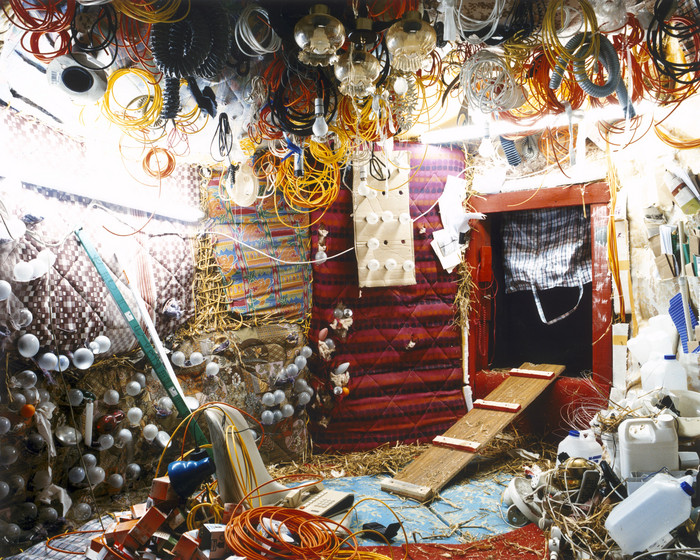 Anne Hardy's photographs depict places where obsessions have taken root and the natural world has invaded the confines of interior space. A forest of decaying Christmas trees fills a room with a freshly painted door (Lumber). Antlers cast spidery shadows against a faux-panelled wall (Swoop). Piles of dead leaves form a barricade beyond the windows of a control room (Drift). Even an image which first appears to be a straight depiction of a ceiling fan (Small Space) becomes strange when examined in context. The fan, an industrial item suited perhaps to a shabby small business, is surrounded on the ceiling by reflective stars which would be more at home in a child's bedroom. A sense of wonder accompanies the everyday. We are looking at a grotty ceiling but seeing stars.

This paradoxical quality is evident in all the ‘interior landscapes’. Something magic is at work in an image of a cell-like room, its dirt floor riddled with cigarette butts, a shaft of unnaturally bright light streaming from a skylight. Balloons and streamers suggest the remains of a slightly sinister party. Mysterious chalk markings on the black walls conjure up thoughts of Masonic rites but could equally be the hieroglyphic aide-memoires scrawled on the walls of houses under renovation by plumbers and electricians.

Hardy's practice involves constructing the spaces in her photographs from scratch. Her props are found materials, often the discarded odds and ends that wind up in jumble sales or city skips. She has a fascination for objects with a past; whether careworn or unloved, her materials have histories that contribute to the narratives the photographs suggest. These objects inhabit rooms that are fashioned in the artist's studio but, as impressive as her DIY skills are, Hardy's real talent lies in making pictures rather than constructing sets. Each scenario is composed with the camera's perspective in mind. Hardy is interested in the two-dimensional image and uses her props the way a painter uses gestural brushstrokes, to punctuate the space and convey a sense of rhythm and movement across the picture plane. Falling curves of curtains are speckled with a baffling array of butterflies and other insects. Foam sealant seeps between the cracks of walls and ceilings. Recurring round forms of light bulbs and balloons cluster like spores.

The more you look at the ‘interior landscapes’ the more painterly they appear. The mad glut of brightly coloured mattresses peppered with coiled cables and light bulbs in Cell produce an effect of contrasting colour and pattern that recalls Matisse's canvases. Distracted by the uncanny subjects of Hardy's pictures, it is easy to overlook her exceptional command of composition. The architectural placement of the column breaking up the line of net curtains in Untitled 3 (Office), for instance, recalls a Barnett Newman zip while the cobweb-covered tree trunks in Untitled 1 (Cobwebs) suggest the craggy outlines of a mountain range in a Romantic genre painting. For all their art historical referencing, Hardy's dreamlike images succeed by inviting the viewer into spaces just the other side of reason, suggesting that the chaos that resides beneath the surface of the everyday has its own logic and beauty.