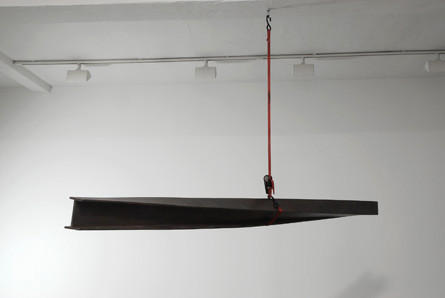 Maureen Paley is pleased to present the first solo exhibition of LA-based artist Eric Wesley at the gallery.

Fundamentally, Wesley is an artist who engages in cross-media activity often producing objects. He considers himself an enthusiast. The term ‘enthusiast’ refers to a deep interest, zeal. It is the position of Eric Wesley that contemporary culture has lost this power, this eagerness, and in its place, instituted a brand of numbing surrogates. Thus, it is with a sense of sobriety that we witness the artist’s display of an ironic yet earnest affront on the system as he assumes the role of ‘modeler’.

The title for his show is simply New Realistic Figures, re-titled from the original, comedic, Revenge of the Nerds. Each of the four works in New Realistic Figures are, in fact, models, bringing into question the nature and semantics of the terms ‘real’ and ‘realistic’. One project is hand crafted, moulded, cast and packaged as a model kit by the artist while another involves a store bought model assembled by a professional. The artist’s hand, however controlled and precise, becomes a somewhat haphazard device.

It seems the intent of the artist to create a kind of safe haven for dreamers, enthusiasts, and thinkers in which to deal with the world on an elevated level, away from the earthly confines that can sometimes influence or dominate art. If in fact one were able to transverse this reality, this scale for instance, only then is it possible to receive the content of the vessels on display and in question. POWER TO THE ENTHUSIASTS!*

A related passion is his art school, founded with his friend and colleague Piero Golia, a conceptual artist from Naples, Italy, currently based in Los Angeles. The Mountain School of the Arts, so named for the Mountain Bar in Chinatown that serves as its primary site, is actually a programme of lectures, studio crits, and semi-public gatherings. Wesley makes it clear that this is not part of his art practice, explaining that the school is real, whereas his art is not. This declaration by negation is typical of Wesley. As soon as meaning appears to stick, it is set into motion again. The project is not located in the performative but rather in a genuine sentiment about what an art education should look like. Operating between something like a fabulous museum education programme and a twenty-first-century salon, the Mountain School’s ambitions are relatively nomadic. Wesley spends a huge amount of his time working out things like accommodations and studio space for students and coordinating visiting lecturers. Wesley is actually trying to create a new public space for discourse and, more broadly, to inscribe his own practice.**