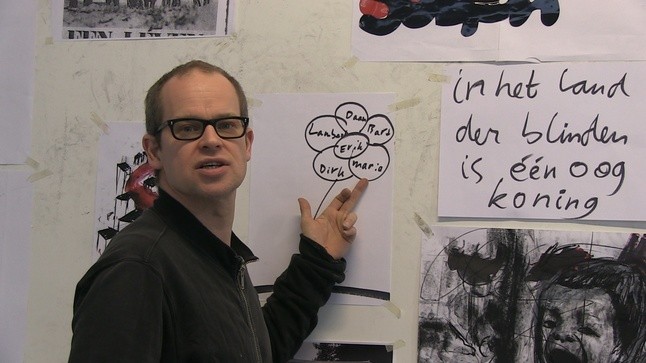 Maureen Paley is pleased to present Private View, Erik van Lieshout’s first solo exhibition at the gallery following on from his screening of Janus in February 2013.

Featuring new drawing, sculpture and film the exhibition builds on his project Ego included in the The Encyclopedic Palace, curated by Massimiliano Gioni for the 55th edition of the Venice Biennale. Private View weaves together narratives from autobiographical sources as well as from factory employees in the south of Holland and the Dutch Royal family. The artist’s parents and siblings are the main subjects of his new film The Workers.

In The Workers van Lieshout records the personal dynamics of his family over a twelve-month period and shows moments of shared happiness as well as the aftermath of tragic events. Including animation produced by his brother, the film records the daily lives of his mother, father and sister – all of whom are social workers. Van Lieshout investigates the relationship between altruistic acts, individual ambition and collective needs as he accompanies his family when they visit clients and care for patients. The film includes conversations with its producers and displays the brainstorming and behind the scenes planning leading up to the process of making it. This film will form part of a feature length project supported by The Mondriaan Foundation and the Dutch Film Fund which is due for release in December 2014.

In his work van Lieshout immerses himself within the rituals and norms of the communities he describes. Oscillating between documentary and fictional perspectives he tells stories, be they out of sympathy, curiosity, or criticism that simultaneously shock and move us. The rapidly edited films provide immediate access to worlds that we may only have a remote connection to and can seem confrontational at times while embracing that which is vulnerable throughout. His impulsive drawings and pictures are created during the production of the films and act as cathartic expressions of his experience. These elements come together within intimate environments that are specifically constructed from lo-fi materials for each exhibition. Van Lieshout invites his viewers to find a seat within his installations, offering a claustrophobic proximity to both the film and other spectators.