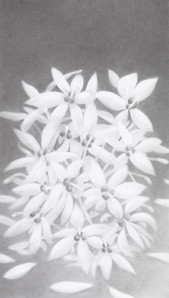 For his first solo exhibition in London since 2003 British artist James Pyman will show a large group of new pencil drawings. Half of these were made for an illustrated edition of Dracula published in November 2008 by Four Corners Familiars. The second group of new drawings extend the work made for the initial adaptation.

Pyman chose Dracula for a number of reasons. He was attracted to the structure of Dracula which takes the form of an epistolary novel comprising written and recorded diary entries, journals, letters and newspaper cuttings to create a collage of disparate voices. Pyman’s intention was to mirror this effect by avoiding the obvious visual tropes of vampire literature and pinpointing passing references in the text to illustrate. Pyman made a pencil drawing for each chapter of the book that focused on textual descriptions of objects and places only briefly mentioned by characters but which were still key to the narrative. The reference material is a combination of images sourced from online, magazines and newspapers and self-generated material. In this way the drawings build up into a body of work that simultaneously graphically visualise the text while also examining codes of illustration and adaptation. As a child Pyman had read numerous versions and adaptations of the source text in 1970s generic comic books like ‘Dracula Lives’, ‘Vampire Tales’ and ‘Tomb of Dracula’. The latter was a long-running, bleakly existential soap-opera which (consciously or otherwise) reflected the American political and social turmoil of its period. The opportunity to adapt the text while acknowledging previous influential approaches to the source text was personally significant to the project.

The new group of drawings extend the notion of adaptation to concentrate on objects and landscapes mentioned by the characters in Dracula as personal recollections, described thoughts, remembered places and moments. These recalled images are shown parallel to the original illustrations to expand the conceptual framework of the original adaptation.

James Pyman’s artwork investigates how identity is defined by circumstance, geography and popular culture. His drawings and writing are often presented within both historical and contemporary frameworks, predominantly in relation to comic strips, childrens’ illustration and other graphic narrative forms. This compendium of childlike interests and adolescent pursuits is used as a vocabulary with which to communicate complex social ideas. The influences can be taken from their initial source and set in other eras and locations. In this way the work connects autobiography with contemporary socio-political and cultural occurrences.

Pyman’s work has evolved across a range of forms including large-scale drawings for exhibition, fictional biographies and artists publications. The pencil drawings depict remembered moments and glimpsed landscapes. The sources can be found images, press agency photographs or self-generated photos and sketches, and these elements are combined to produce a hybrid image. Each picture is an individual piece rather than part of a series or group of images but they are unified by technique. Previous publications have used various (often marginalised) forms of publishing as a structure to express more abstract or emotional concerns. The Adventures of Lionel adopted the storytelling structure of childrens’ books like ‘Rupert’ and ‘Tintin’, and Wilf - A Life In Pictures took the form of a biography to document the careers of a group of fictional newspaper cartoonists from the 1960s to the 1990s. It examined the relationship between 20th century political and cultural events and traced the development of illustrative tropes and satirical styles to describe these events.

This exhibition follows a period of focus on residencies and publications. These include residencies at S1 Sheffield and the British School at Rome where he produced an illustrated adaptation of Pinocchio. Recent publications have also included Wilf - A Life In Pictures (pb Norwich Gallery, 2004) and The Adventures of Lionel (pb Piece of Paper Press, 2007), and projects have included work for Esopus Number 12 and at www.creativetime.org/comics/pyman/html.

Pyman lives and works in Sheffield and London.
www.maureenpaley.com