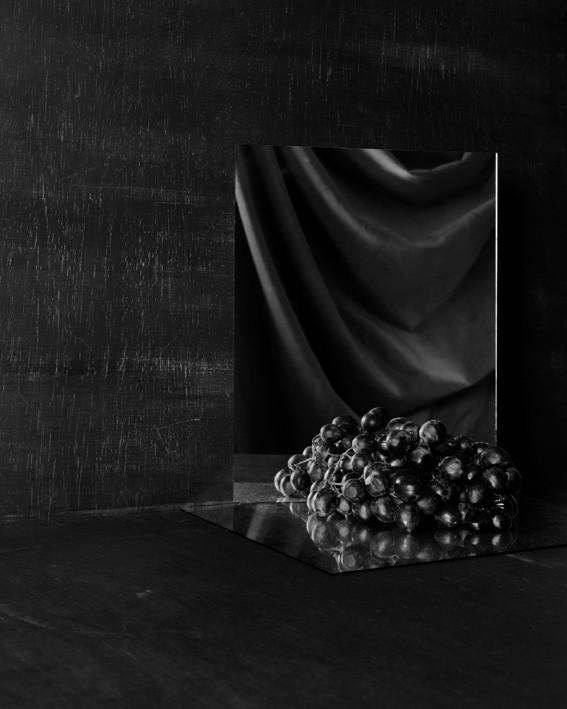 
Maureen Paley is pleased to present Sarah Jones’ sixth solo exhibition at the gallery. Following on from the recent publication of her monograph by Violette Editions, Jones’ new photographs continue to explore how subjects are measured and transcribed through the large format view camera and flattened in pictorial space. Predicated on the disarming and the vernacular she uses a vocabulary that simultaneously describes as well as documents. In her expanded Cabinet series, (2013-14) arrangements of found objects are contained, mirrored and presented as if held in a vitrine.

Over the years themes such as the analyst’s couch, the municipal rose garden as still life in-situ, the drawing studio and the singular female subject have been central to her concerns. Her photographs are often made on location and illuminated with carefully controlled lighting that allows the subject to both emerge from and recede into a darkened space. Through the use of analogue techniques Jones studies the correspondence between the skein of the film, the surface of the photographic print and the surface of her subjects. For Jones this attention to materiality brings to mind the act of mark making in drawing.

She has previously used the diptych as a formal device and direct reference to early stereographic photographs in order to present two perspectives of a single form. More recent diptychs consider the act of doubling and the alchemic nature of the photographic process by literally flipping an image. One becomes an imprint or reflection of the other recalling the Rorschach inkblot. In such an act of mirroring, Cabinet (II) (After Man Ray) (I) and (II) picture a curved glass object that recalls Man Ray's Le Violon d’Ingres, (1924). Other works in the exhibition reflect on the photographic language of Florence Henri, Karl Blossfeldt and Eugene Atget.

Jones’ most recent monograph is published by Violette Editions with essays by Brian Dillon, David Campany and a conversation with A.M. Homes. Sarah Jones is currently a Reader in Photography at the Royal College of Art.