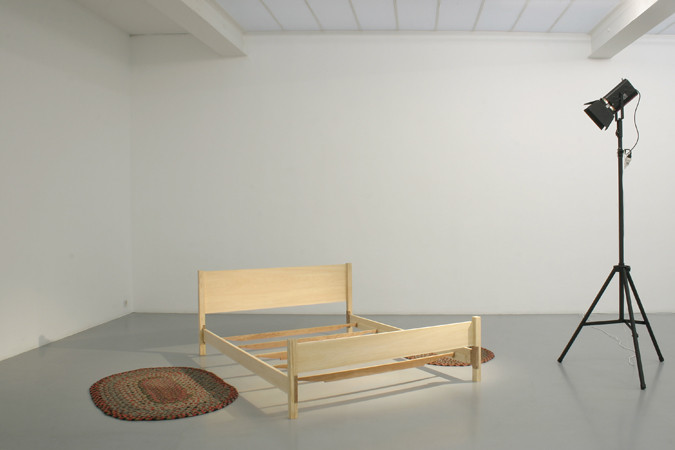 Joe Scanlan
Massachusetts Wedding Bed , 2004
Commerce Breeds Acceptance
In the early stages of any civil rights movement, protests, demonstrations, editorials and public advocacy are crucial for bringing issues to the attention of a wider public. Such actions are generally spawned by frustration and received with anger, and no amount of appeals to ethics or rights can fully overcome the spirit of conflict, of resentment, with which a movement starts. After the high ideals and lowdown nastiness have run their course, however, it is commerce that ultimately accomplishes what piety and aggression could not. Americans, as a majority, are against gay marriage. But an even greater majority - and one with a much deeper conviction - is for the sale at a profit of shoes, gowns, tuxedos, rings, flowers, cakes, flatware, decorations, champagne, pajamas, hotel rooms, airline tickets, almonds, lace and candles. In the long run, the dull routine of commerce - of money exchanged for goods and services, the taxes paid on that income and the goods and services consumed - does more to persuade the American public of what is right and decent than sophisticated rhetoric ever could. Hence, The Massachusetts Wedding Bed. The only bed on the market whose very purchase is a statement of support for the rights of any two consenting adults to get married, however they see fit.

A Press Conference
The Massachusetts wedding bed made its world premiere at 5:00 PM on January 22, 2005, just forty-eight hours after George W. Bush was inaugurated to his second term in office. At this time, Things That Fall staged a press conference titled “Two or Three Americans Field Questions About Their Country From in Bed” at 46 Leliegracht, Amsterdam, The Netherlands. For one hour, members of the Dutch press and art viewing public were welcome to ask Donelle Woolford, Greg Scanlan and Joe Scanlan questions about the United States, their fellow citizens, their government and their shopping habits, or any other questions they cared to.

Philippe Parreno
The Boy From Mars , 2005
This yellow sign The Boy From Mars advertises a film of the same name by Parreno about an architectural construction called “Hybrid Muscle, built in rural Thailand by the artist and the French architects François Roche and Stephany Lavaux (R&Sie Architects), which functions as a battery house.

Nathan Carter
THE WHIRLWIND BUZZ AERIAL SHA-BANG IS OFF
TO A WILD START OVER THE DISPUTED HILLS OF
THE BOWLING GREEN , 2006
Nathan Carter's painted wall reliefs are both distinctly contemporary and strangely old-fashioned. Capturing the kind of information-overload familiar from present-day culture, Carter work strives to order this chaos with fanciful images that seem lifted from the world of medieval maps and children's book illustrations. Composed of painted wood planes to which the artist has attached hundreds of small wooden elements that suggest directional signs and roadblocks, military regalia, and border crossings, Carter's sculptural reliefs conjure up a world in which boundaries and national identities are unstable.
That the resulting confusion of images and icons, routes and territories ends up looking more like fiction than fact is precisely the point. This is a world that Carter chooses to construct with the most rudimentary of means: his own hand. Carter's wooden elements, combined and reassembled in endless permutations, suggest an impossible effort, one that can only live in the space of the artist's imagination. At once distinctly illusionistic, Carter's colorful assemblages also hover on the verge of abstraction. Indeed, viewed from close-up, his myriad icons are nothing but a succession of colored marks and squares. It is as though, in Carter's world, an overabundance of information ultimately falls back into its opposite: incomprehensibility and absence.
Claire Gilman

Mark Luyten
Arrière-image 16, (1994 – 2006), 2007
Arrière-image 16 is part of an ongoing series of video installations. Each installation is considered as a conversation piece: two video images next to or opposite each other. These video images are fragments from the video archive, often ‘in-between-images', made without real intention. Images shot while adjusting the camera or to fill up the tape.
Each video installation, each conversation piece is related to other video installations from the Arrière-image series. Sometimes it's a repetition or an alternate version or a similar subject, etc. In the end, the total of all the different installations is a next piece.
In Arrière-image 16 a self-portrait from 1994 is placed against a self-portrait from 2006. A mirror that is not a mirror, a present looking at a past (and vice-versa).
Over these two images a dialogue between the two main characters from Wim Wenders' Paris, Texas can be read. Travis eventually finds Jane in some kind of peepshow. He sees her, she doesn't see him. Slowly, a first, careful conversation starts.
www.gms.be