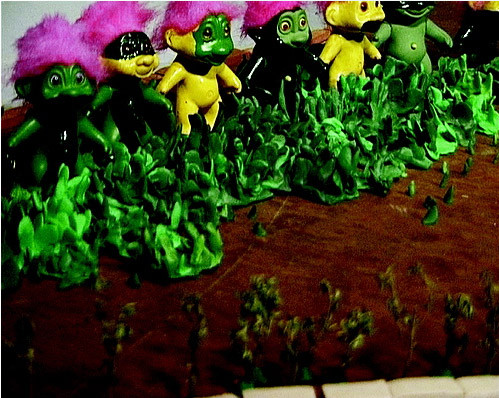 A video myth by Lisa Jeannin and Rolf Schuurmans

G G G & G is a story with multiple space and time facets, in which the fragments are so chargedand communicative that the interlaced entity paradoxically becomes natural and self-evident.
G G G & G is about mental spaces, models of projection for questions with regard to reality’s chaos and the complicated obviousness of life. From time to time a hall of mirrors is described in which identity is questioned and the monument of reality collapses. Here an inquisitive gorilla can discover herself in thousands versions with the aid of her filming camera eye; or it is also possible that a frustrated and lonely gangster shoots the mirrors into pieces, maybe carefully in order to keep
his enigmatic nature intact. But soon the looping restores this hall of mirrors.
G G G & G is about the coming into existence from magical rituals performed by small colourful trolls, about the loneliness of the gangster in a world revealing its built-in fiction, about the green goddess’s lust for creation and destruction in front of a sterile civilization, about positive identity dissolutions as a strategy to welcome and form a larger reality, about the return to nature and the green and about the spider’s fantasy and the public’s fantasy and fantasy as a subversive force aimed against order and reason who threaten humour and human dignity with death.