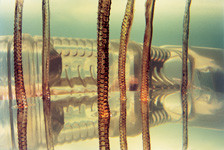 A Dutch artist based in London, Saskia Olde Wolbers (born 1971) makes videos with a mysterious transparency. She does this by first creating extremely elaborate sets by hand, and then filming inside these miniature environments, building up stories inside them.
Olde Wolbers' constructed worlds are at times breathtaking in their beauty, and yet they are also unpeopled and desolate. Combined with a soft, somewhat hypnotic voice-over, her images penetrate deep into the minds and memories of viewers. In the midst of this inorganic landscape - a void of humanity - a complex tale is narrated, prompting the viewer to identify with the protagonist. While tragic and strange, the stories also include genuine news footage, thus planting in the minds of the viewers the thought that such things could happen in the real world, perhaps even to them. The viewers are made conspirators or collaborators rather than being detached observers.
Olde Wolbers has won the Baloise Prize (2003) and the Beck's Futures Prize (2004). Chosen as the “Best of 2005: 11 critics and curators look at the year in art” by Art Forum, and is a promising artist of the future. She has only made nine videos to date because each takes an average of one to two years to produce. This exhibition presents two of her most acclaimed works.
www.mori.art.museum