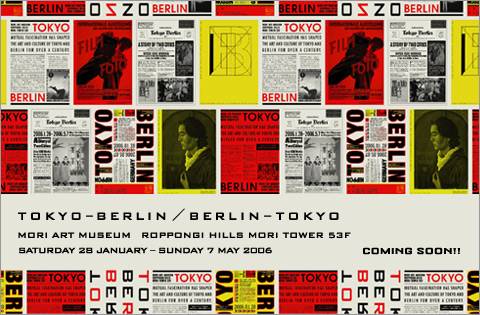 Tokyo - Berlin / Berlin - Tokyo traces the fascinating cultural links between these two great world capitals from the end of the nineteenth century until the present day. Through two world wars, a devastating earthquake, high-speed economic growth, failed ideologies, and economic recessions, both cities experienced similar periods of ruin and rebirth. Cultural contact between the two capitals at these times was not limited to art, but included numerous fascinating exchanges in such fields as architecture, photography, theatre and design. This exhibit reflects the varied interaction and traces their history in a total of some 500 works divided into 11 sections.

The first half of the exhibition showcases individual artists and exhibitions that influenced Tokyo's artistic community in the early twentieth century, including: Berlin architects Hermann Ende and Wilhelm Böckmann, who designed the original Ministry of Justice building (1887) in the Neo-Baroque style; the Der Sturm Gallery exhibition (1914), which Yamada Kosaku, a composer, and others brought back to Japan from Berlin; Murayama Tomoyoshi, who created a sensation when he helped found the MAVO group (1923) after absorbing such influences as Russian avant-garde, Italian futurism, and Dadaism during a stay in Europe; and the film and photography exhibition FIFO, which had immense impact on the New Photography movement when it came to Japan in 1931. Also included are Yamawaki Iwao and Mizutani Takehiko, who studied at the Bauhaus, and Bruno Taut, one of the most important architects in Berlin who spent three years in Japan in flight from the Nazis in the 1930s. This part of the exhibition highlights these individuals as it explores the relationship between Bauhaus and Japanese architecture and design.

The second half of the exhibition focuses more on the parallel relationships between the two cities and their artistic movements. Works in this section start with the late 1930s, when both nations were on the brink of World War II and continues through war and its accompanying defeat and the rebirth and reconstruction in the 1950s. This is followed by the 1960s, when the New York-centered Fluxus movement united avant-garde movements in Tokyo and Berlin, that then grew and flowered together. Finally, the focus of the exhibition shifts to Germany at the end of the Cold War. After the Berlin Wall was torn down the city once again became the capital of a reunified Germany. This revitalized Berlin has grown into a vibrant city capable of sustaining both its history and traditions to produce fresh and dynamic contemporary art.

Tokyo - Berlin / Berlin - Tokyo is one of the biggest events of the Germany in Japan 2005/2006 festival, and will also tour to Germany, where it will be displayed at Berlin's Neue Nationalgalerie from June 2006.

Sections
BERLIN-TOKYO 1880-1914: Exoticism and Modernity
DER STURM IN TOKYO 1914: The Impact of the Avant-garde
TOKYO-BERLIN 1912-1923: New Visions in Art and Architecture
CULTURES IN CONFLICT 1918-1925: Berlin Dada, Tokyo MAVO and the influence of the Russian Revolution
MODERN GIRLS, MODERN BOYS: Moga and Mobo in 1920s Tokyo and Berlin
FIFO (FILM UND FOTO) 1929-1931: New Approaches in Photography
BAUHAUS AND BRUNO TAUT: Design and Architecture in the 1930s
THE DARK YEARS 1931-1945: Dictatorship, Resistance and War
RECONSTRUCTION 1945-1950s: The Aftermath of War
FLUXUS, POP ART AND NEW EXPRESSIONISM IN THE 1960s
BERLIN NOW: Contemporary Art After the Wall