The DaimlerChrysler Collection in Japan 2006 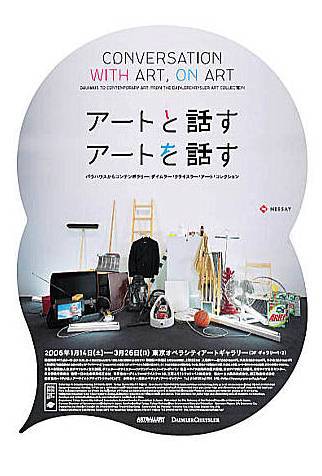 The DaimlerChrysler Collection in Japan 2006
Conversation with art and on art.
From Bauhaus to Contemporary Art
January 14 - March 26
Tokyo Opera City Gallery


The Exhibiton of the DaimlerChrysler Collection will represent one of the major events of the “German Year” in Japan.

Works by some fifty artists, from respected Bauhaus artists to spirited young artists, will be introduced from the DaimlerChrysler Art Collection. Bringing together works of art covering a variety of expressions, the exhibition spaces display impressive installations.

Artistic expressions have been growing increasingly diverse during the recent years. Many artists of our time who express themselves without being constrained by conventions, wish viewers to experience their works freely. But you might often feel lost in the presence of a work of art, or have a preconceived notion that one cannot appreciate art without expertise.

We believe that encouraging free approaches toward art is the important first step for viewers in beginning dialogues of their own with works of art. Contemporary art tends to be considered especially difficult to understand. Yet, with keywords drawn from daily life, we can start the dialogues that will eventually guide us to discover linkages between our lives and a work of art, the background in which it was created and the messages it conveys.

Moreover, given an opportunity to exchange ideas with others, we can develop the basics of mutual relationships, that is, to understand and respect each other's perspectives in a society with increasingly diverse values.

Visitors will think about simple questions in the workbook as they observe the works exhibited. This exhibition allows viewers to encounter diverse works that range from Bauhaus to contemporary art, and encourage them to have dialogues based on various keywords. We believe that it will provide an opportunity for the viewers to intensify their understanding of the relationship between art and self, and between self and others.


Colour/Form/Space
From Bauhaus to Contemporary Art
Analyzing the elements comprising a work of art is an important cue for appreciating art. Colors bring liveliness to art works and affect viewers' perceptions in variety of ways, depending on how they are arranged. Forms and depth that are rendered with dots, lines and planes can be considered essential components of art. A careful study of the constituent elements is a fundamental process in looking at art and applies to any work of art.
Founded in 1919, the Bauhaus school of art, craft, and design, conducted an in-depth study on the effects those elements produce.

Josef Albers, one of the instructors at Bauhaus, produced strictly abstract paintings that consist of minimum elements. Yet, his paintings make us feel that there is movement. Careful observation tells us that tensions between carefully placed colour planes are responsible for it.
Artists: Josef Albers, Willi Baumeister, Max Bill, Ulrich Erben, Johannes Itten, Oskar Schlemmer and more.

Materials seen in our daily life that are unconventional for art, such as feathers, cork, coins and neon tubes, were incorporated in the works of Zero artists. No concrete representations can be found in their works. Judging from the fact that materials are placed systematically without being altered, the artists' intentions seem to be different from those pursued in traditional art, such as a realistic rendition, or an expression of inner self.
In addition to a careful study of formal elements, figuring out a reason for an artist's choice of a particular material will eventually reveal messages conveyed in a works of art.
Artists: Enrico Castellani, Dadamaino, Jan Henderikse, Francois Morellet, Giulio Paolini, Jean Tinguely, Klaus Staudt and more


Subject Matter
Minimal / Conceptual
The subject matter of a work of art does not necessarily speak for itself.
Coinciding with the unconventional practices of Zero, Minimal art emerged in the United States in the 1960s. And the Minimalism movement spread over Europe as well. Minimalists eliminated subjectivity and illusions from their works, based on a belief that art is reality in itself, instead of being a means of expression. In order to achieve anonymity, industrial materials were often incorporated in their works. Particularly notable is that great importance is placed on the relationship between objects and spaces.

Works from these movements may appear especially difficult to understand. Yet, subject matter will be discovered as we observe, contemplating the relationship between objects and spaces, and between concepts and objects.
Artists: Daniel Buren, Andre Cadere, Joseph Kosuth, Charlotte Posenenske, Robert Ryman and more


Art and Society
Media / Brand / Product / Original
Traditionally, the value of art depended on the rarity that arose from the extraordinary creativity and technique of an artist. In our time, however, fragments of our daily life are often presented as works of art. And in some cases, artists are not involved in the process of fabrication at all. Characteristics of these works are rooted in Conceptual art, introduced in the previous section, which emphasizes the importance of concepts.
The term "information society" has been established for some time. We are surrounded by an overwhelming amount of information. Also, highly-developed industry and advanced distribution systems have made everything easily accessible. We will examine how these aspects of contemporary society might affect our relationship with art.
Artists: Are You Meaning Company, John M. Armleder, Sylvie Fleury, Robert Longo, Mathieu Mercier, Kirsten Mosher, Roman Signer, Andy Warhol, Georg Winter and more.