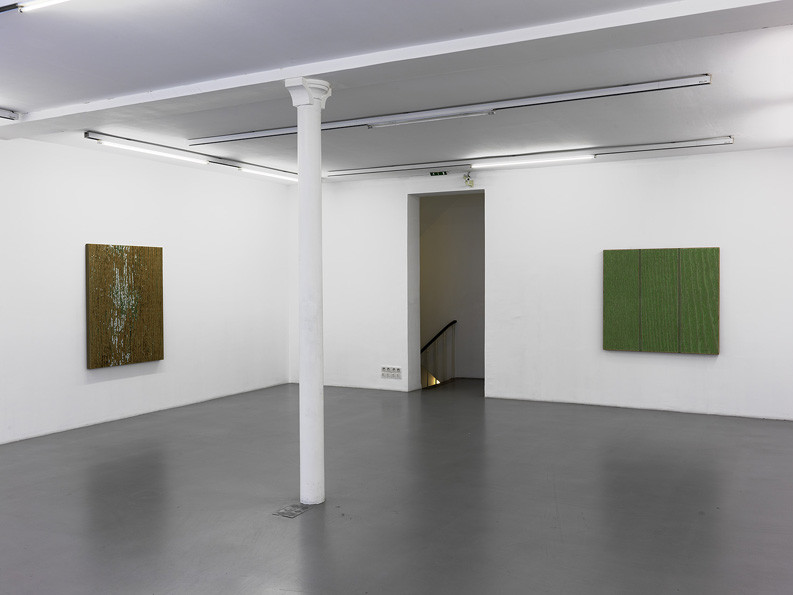 Galerie Nelson-Freeman is delighted to present the first European solo exhibition of American artist Alex Hay. The exhibition is comprised of recent paintings and drawings all created between 2004-2010.

During the ‘60s, Hay developed a body of paintings and sculptures inspired by everyday objects: a cash register receipt, a paper bag and a paper airplane, a sheet of lined legal paper. The artist reproduced these objects in unexpectedly large formats, all while faithfully preserving their likeness to the source material. Presented first at the Leo Castelli Gallery, and then in the very first survey of Pop Art, held at the Hayward Gallery in London in 1968, these works are striking for their monumental scale and incredible presence. Although Hay's work seems most to resemble the Pop Art aesthetic, in reality Hay's practice was as much involved in ideas that would come to define conceptual and process art, and for that the work is a rare bridge across different essential moments of the '60s.

Alex Hay was also known in the '60s for his collaborative performances, notably with Robert Rauschenberg. Between 1962 and 1964 was associated with the Judson Dance Theatre, the preeminent American experimental performance space, and in 1966, he was one of the featured performers in "9 Evenings," the ground-breaking interdisciplinary project that brought performance art to national attention for the first time, merging dance, theatre and new technologies. Robert Rauschenberg, John Cage, David Tudor, Yvonne Rainer, Deborah Hay, Robert Whitman, Steve Paxton, Lucinda Childs and Öyvind Fahlström were also part of this endeavour.

By the end of the ‘60s, Alex Hay decided that it was no longer necessary to his practice to create images in work, or, finally, even “art objects,” the process of measuring, allowing the sun to fade pigment-covered paper, or simply collecting what would blow onto a canvas bag becoming the work itself. In 1969, Hay left New York and settled in Bisbee, Arizona. He would not exhibit his work publicly until three decades later when, after starting to paint again in 2002, two new paintings representing enlarged fragments of wood were included in the 2004 Whitney Biennial.

The paintings and drawings now being shown in Paris, like those presented at the Whitney Museum of American Art in New York, represent with great precision—almost like a trompe-l’œil—the contours, details and textures of wood or linoleum. Painted using acrylic spray paints and hand-cut stencils, most works are accompanied in this show by the life-size colored-pencil drawing used to create each painting. From a distance these works present a precise portrait of fragments normally destined for the trash, the careful observation of what remains unnoticed—the stuff of life. Up close, these same works become more abstract as their painterly surfaces break down into pattern and material--the stuff of painting.

Alex Hay was born in 1930, in Valrico, Florida. He lives and works in Bisbee, Arizona. During the ‘60s, he participated in numerous group exhibitions. In 2002, after a 38-year hiatus, his work was presented at Peter Freeman Inc. in New York. Another exhibition followed in 2007. Recently, Hay participated in several group shows including the Whitney Biennial (2004), The Painted World at P.S. 1 Contemporary Art Center (2005), 9 Evenings Reconsidered: Art, Theatre, and Engineering, 1966 at MIT’s List Visual Arts Center in Cambridge (2006), the Fraenkel Gallery in San Francisco (2006-2007) and Danser sa vie at the Centre Pompidou in Paris (2011). His work is in a number of museum collections, including: The Whitney Museum of American Art, New York; Museum of Modern Art, New York; San Francisco Museum of Modern Art; The Art Institute of Chicago; Moderna Museet, Stockholm; and Museu Serralves, Porto.
www.peterfreemaninc.com