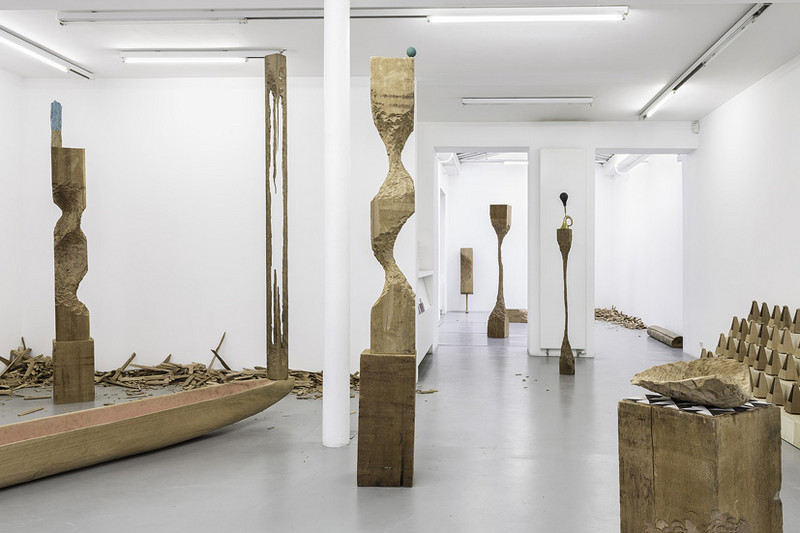 Galerie Nelson-Freeman is pleased to present new works by the American artist David Adamo, his second solo exhibition at the gallery.

David Adamo’s oeuvre incorporates sculpture, performance, installation, and video. In the sculpture Adamo has often manipulated familiar manufactured objects: canes, baseball bats, tools and axes carved and hacked away in such a way that they became disconnected from their intended use, the inherent strength of each transformed into a fragile ghost of what we expect.

Adamo's new work pushes these transformations in new directions, not only subverting an object's intrinsic use but also playing with shifts in size and material. Squashed tomatoes are cast in bronze; rolled-up carpets are carved from trunks of cedar wood. The sculptures can take on impressive dimensions—such as the recent seven-meter high column made at the KW Institute for Contemporary Art in Berlin in the summer of 2011. Or, at other times, the works seems barely perceptible—such as the bronze "M&M’s", painted plaster "fruit," and "coins" the artist might scatter throughout an exhibition space.

The relationship to space and time is an important component of David Adamo’s work, the spectator often faced with an unusual and poetic mise en scène, as if witnessing the aftermath of a violent tragicomedy. Objects seem discarded, strewn about, shattered, consumed. Tensions and dualities are present throughout the artist’s oeuvre in which he constantly oscillates between power and precariousness, violence and fragility, presence and absence, seriousness and humor.

For this exhibition, the ground floor features the installation Untitled (Symphonic Poem For 100 Metronomes) an homage to the composer György Ligeti together with an ensemble of monumental sculptures in cedar--a gigantic canoe, various columns standing as totems, a rolled-up carpet painted. On the first floor, the floor itself is entirely covered with sticks of white drawing chalk laid in a herringbone pattern to make the ghost of an historic parquet floor--exactly the kind of floor as one might even expect to find in French interior, except that this "ghost" of such a floor cracks and breaks as it is walked on, perfect at the start of the exhibition and then crumbling more as each visitor sees it, the experience of any visitor seeing it subtly different, always, from the experience of the previous visitor. Luring the visitor across this fragile floor a is a shelf of small familiar objects—real or remade?

Born in Rochester (USA) in 1979, David Adamo has lived and worked in Berlin since 2008. During the past decade, he has participated in numerous important group exhibitions including the Whitney Biennial at the Whitney Museum of American Art in New York (2010), Greater New York at MoMA P.S.1in New York (2010), and Based in Berlin at the KW Institute for Contemporary Art in Berlin (2011). In 2009, his work was the subject of a solo exhibition in Poitiers at Confort Moderne entitled On se bat toujours quelque part (We’re Always Fighting Somewhere). In 2010, his work was part of FRI ART in Fribourg, Switzerland, then at the Basilica Santa Maria Maggiore in Bergamo, Italy, in 2011. Last spring his work was shown at the Bielefeld Kunstverein in Germany.
www.peterfreemaninc.com