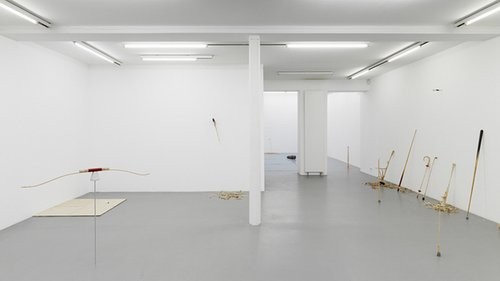 The Galerie Nelson-Freeman is proud to present the first solo exhibitions in Paris of David Adamo and Ania Soliman from the 6th March to 2nd April 2010. Both artists are taking part in the 75th Whitney Biennial (Whitney Museum, New York, 25th February - 30th May 2010).

David Adamo’s oeuvre encompasses sculpture, installations, video and performance. His exhibitions comprise large groups of miscellaneous objects, which while being quite familiar have undergone certain modifications. Within the same installation, the viewer is faced with objects evoking quite contradictory feelings: certain objects may symbolise violence (a baseball bat, an axe or a bow), while others represent pleasure or evoke what is seen as “cultural refinement” – music, dance, theatre (a musical instrument, a dancer’s pump, a stage). However, even the objects a priori seen as aggressive or tough, produce a feeling of ambiguity. They have in some way been neutralised by the artist and have thus lost their primary function. The handle or the body of these instruments and tools (in this case wooden walking sticks and sledgehammers) have been sculpted and hollowed out to the extreme so that they now take on the skeletal aspect of brittle bones. The shavings from the sculptured objects are scattered on the floor below them, thus evoking a performance that never took place. Surrounded by these different sculptures, which operate somewhat like a riddle, the spectator is invited to take part in an experiment in synaesthesia, where he has to decipher some meaning from the diverse elements and imagine the sounds and images that go with them. All of David Adamo’s work is animated by a performative quality and the poetry of absence. Faced with these oeuvres and all their latent possibilities, the spectator is obliged to reconstitute what existed before and invent a story for the present.

David Adamo was born in 1979 in the State of New York. He currently lives in New York and Berlin. His work has been exhibited at the Metropolitan Museum of Art (New York), the Swiss Institute (New York), the Palais de Tokyo (Paris) and the Confort Moderne (Poitiers).

Through her drawings, montages and texts, Ania Soliman explores the political implications of the image. She has no hesitation in using the resources of the Internet, popular culture or even her own “multiculturalism” (She is the daughter of a Pole mother and an Egyptian father and grew up between Iraq, Europe and the USA).

For her outstanding exhibition « Biohazards » in 2000, at the Drawing Center in New York, the artist investigated the effects of the appearance of new viruses and how this was represented in the media. Using stills taken from a documentary entitled End of the Earth: Killer Virus broadcast by the Discovery Channel as a starting point, she produced four large format drawings using wax and pigment, each depicting a scene of the film (for example the funeral of an Aids victim in Africa).

Here in Paris Ania Soliman has chosen to exhibit the installation – presented at the moment at the Whitney Biennial – Natural Object Rant: The Pineapple, 2007-2010, comprising twenty six digital montages each accompanied by a text, corresponding to the twenty six letters of the alphabet. For each montage, two found photographs were superimposed to create a letter of the alphabet. All images feature the pineapple or refer to its place in colonial history and industrialized agriculture. « I chose the pineapple because of its extravagance as a physical object, in terms of its taste and look, as well as because of its centrality to colonial relations (including the annexation of Hawaii by the Unites States). In Europe the fruit was considered deeply luxurious because it was so difficult to transport and grow outside of the tropics, and was seen to embody the colonial reach of royal power ».

Texts, in which a stream of consciousness method was used, are placed side by side with the montages. Album covers, historical accounts, economic reports and scientific data, were distilled and made to evoke different voices and historical positions, often in an argumentative tone. « This project is absolutely dependent on the indexing properties of the internet and how a key word search in both textual and image banks brings up and together disparate visual and textual elements ».
« The pineapple work could be seen to function as a kind of bizarre self portrait of myself as a hybrid multicultural post-colonial subject ».

Ania Soliman was born in 1970 in Warsaw. She lives between New York and Basel where she currently is in residence in Laurenz-Stiftung.
www.peterfreemaninc.com