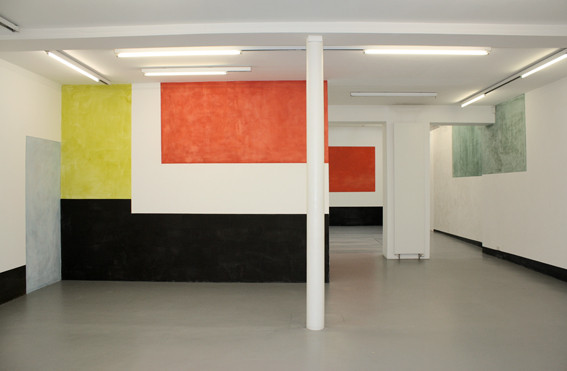 The Galerie Nelson – Freeman is pleased to present a new exhibition of the Austrian artist Ernst Caramelle. Present on the international scene since the middle of the 1970s, Ernst Caramelle remains an artist who defies all classification because of the great variety of mediums that he uses. Paintings, drawings, photographs, videos, installations and murals, he changes the perception of exhibition space as he pleases by means of other spaces that he presents. The works of Ernst Caramelle have been shown on various occasions in Europe and the United States, in particular in 2005 at the retrospective « all printed matters 1974 – 2004 » at the Serralves Museum in Porto, repeated at the Badischer Kunstverein in Karlsruhe in 2006. From April 22 to July 27, 2009 some of his works will be included in the « Compass in Hand: Selections from The Judith Rothschild Foundation Contemporary Drawings Collection » exhibition at the Museum of Modern Art in New York.

For his second exhibition at the Nelson-Freeman Gallery, Ernst Caramelle has chosen to produce a mural covering practically all the space of the ground floor. This is the first time in nearly 20 years that a painting of this size has been presented in Paris. Since the beginning of the 1980s, the artist has developed a new approach in his work and has created murals impacting the architecture of a place in such a way as to disturb our perception of the space. Resembling installations, the rectangular shapes in subtle shades of grey, green, red, yellow, blue or even purple that he creates are based on coloured pigments and water. Represented from different angles and integrating the main vantage points of the given space, its dimensions and perspective, the painting appears like a replica of the space containing it. Ephemeral, due to the direct relationship between the painting and the architecture of the exhibition place, it disappears in all most every case, and fills its function only during the exhibition. This painting can, however, continue to exist through reproductions.

Ernst Caramelle has always had a passion for architecture, a recurrent theme in his work, which we find in particular in some of the drawings presented on the first floor. With the ardour of a potential multitude of ideas, these drawings of invented spaces and examples of architecture are created in a spontaneous and structured way. Among these recent drawings, in three watercolours we find the concept, range of colours, and geometrical shapes of the murals. Ernst Caramelle’s drawings are always done on paper of a small format, which contrasts with the large dimensions of the murals. The artist plays on the difference in size between the murals and the drawings, but also the size of the imaginary spaces that he draws and the architecture of the exhibition place.

Ernst Caramelle puts both the painting and the exhibition place « into an abyss », thereby creating a disturbing effect that raises the question of the status of art in relation to space. He takes into account not only the architecture of space, but also the changing light, to which he attaches great importance. Through the effects of transparency and new perspectives, the artist creates a totally different place, and thus disquiets the viewer.
www.peterfreemaninc.com