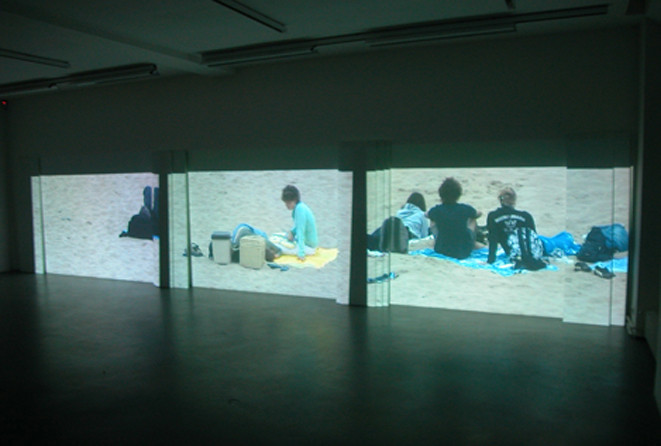 The Nelson-Freeman Gallery is glad to announce Swiss artist Marie José Burki’s third exhibition. Following her 2003 exhibition at the Mac’s Grand Hornu in Belgium, she has kept exploring video and photography with an exhibition in spring 2007 at the Adhémars Castle where she has presented large projections on wooden panels. This year at the Zurich Helmhaus she has also been showing a series of works that mix projections on walls and on large panels as well as “These Days”, a series of new pieces, each composed of photography and video. Next October, Marie José Burki will also be showing a new series at the CRAC in Sète.
Marie José Burki’s work uses three distinct forms: projections, screened videos and installations that mix videographic and photographic techniques. Those three forms give the artist the possibility to explore the contemporary world with three different approaches. With slow motion, close-ups or zoomed out plans, and fixed plans, the images that depict daily life scroll before our eyes like a contemporary painting. In that process, time comes as a key notion: it stretches, spreads, takes up space and places itself as a central piece of the action/ non-action mechanism.
The “These Days” series composes of various moments and places, as the subtitles show: “one morning”, “sooner or later”, “right here”, “here”, “inside”. They all are indications on space and time that bring the watcher closer to what he sees and that place the action depicted in the present.
“These Days (right here)” is an installation that is formed of a plasma screen and fifteen photographs where time stretches as well. A young woman lies alone on the floor, in the sun, and keeps changing positions. The light shows that the action takes place during the day, and we are faced with a lonely and intimate moment in an empty bedroom. This is therefore shown in a neutral way, as a time-space without connotation. However, the watcher isn’t neutral as he peeps at that moment: the woman’s positions do not look natural, she seems to be playing a part for the camera. Which is why the following question automatically comes to mind: is the woman acting natural or is she putting on a show? The pictures that surround it magnify the details of the video and emphasize the idea of a staged scene where the young woman acts in a theatrical way. Those pictures actually depict a reality we can’t extract ourselves from.
On the left is shown a series of four pictures on childhood where three little girls are shown separately and together.
Under the glass roof the artist shows a new piece: “Exposure: studio light” with a three-leveled mirror effect. A woman takes the pose in front of a poster, which we can imagine represents her, with her eyes lost in infinity. A projection on the floor shows the same woman as an actress. The way the different elements are laid out suggest that they are a representation of her thoughts, put into movement.
On the first floor, Marie José Burki presents the installation “These Days (after noon)”, made of three projections, side by side that show three different moments at the beach. The close-ups induce a blurred notion of space, for it is never shown entirely. Each projection is different and the fact that they unwind differently each time causes a different perception that deconstructs the continuity of the day. A day where nothing happens: wait, rest, abandoned chairs, remainings of a day at the beach.
Marie José Burki’s work shows contemporary action but its temporality stretches: there is action but at the same time nothing particular happens. An infinitely small period of time in movement, that sometimes stops as the pictures suggest it. Whether the artist focuses on people, places or animals, she inscribes her images in a neutral set. She then invites the watcher to immerse himself in her work in order to bring the story together. Freed of all connotations, those scenes are brought to our eyes, ready to be analyzed. A process of identification and detachment then takes place. The notions of time, space and perception are constantly questioned. They often emphasize a certain inconsistence of the reality we live in.
www.peterfreemaninc.com