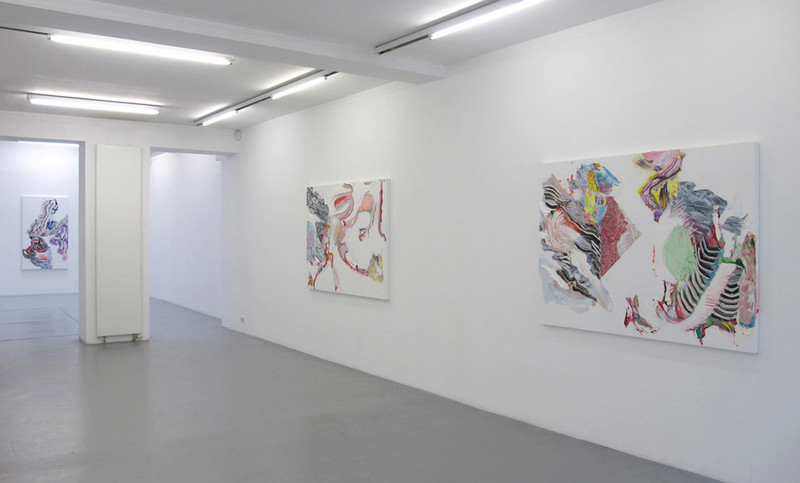 Galerie Nelson-Freeman is pleased to present Pia Fries’ fifth solo exhibition with the gallery, two new groups of paintings and works on paper. These new bodies of work clearly demonstrate the development of Fries’s practice over the past five years, and explore concepts of time, movement and transformation, which are raised in the title of the exhibition - weather flag fan.

Fries describes what has defined her exploration over the past thirty years as “[...] the materiality of paint, its means of expression and what it is made of [...].” To this end, she often manipulates paint to emphasize its material and physical properties, using various tools such as spatulas and knives to apply and sculpt the paint, moving it and building with it so that it runs and plays with color combinations that join flat space and depth. For several years, Fries has integrated silkscreened motifs into her works that create a dialogue with the paint. These motifs are varied: figurative and abstract (wood, heaps of paint, crepe flowers, cornices) as well as details of works by other artists such as Maria Sibylla Merian (1647-1717). Acting as a starting point for the composition of the work, these motifs are printed directly on the wood panels, most of which have first been covered in white paint. The motifs disappear, transform, and even metamorphose themselves through the act of pictorial gestures.

The first group of work presented in the exhibition continues Fries’ dialogue with Renaissance and Baroque engraving, which she began ten years ago by appropriating fragments of 17th-century engravings. For this series, she employs selected fragments by artists such as Hendrick Goltzius and Stefano Della Bella. One can distinguish a detail of a cloud, an angel or even the movement of drapery on the wood panels. It is thanks to a large lexicon of bands, striations, volutes and other plays on texture that Fries is able to connect different forms, to such an extent that it becomes difficult to differentiate between the actions of the artist and the fragments of silkscreened images.

The second group of work consists of paintings and works on paper from the Weisswirt series (2008-2012). In these works, the artist silkscreens a wood block pattern which is then partially covered in pictorial motifs. In contrast to the proceeding works in the exhibition, the palette here is reduced to muted shades, creating a subtle play of chiaroscuro.

Pia Fries lives and works in Düsseldorf and Berlin. Born in Switzerland, she studied under Gerhardt Richter at the Düsseldorf Kunstakademie during the ‘80s. Her work has been featured in numerous solo exhibitions, including recent shows in Germany at the Neuen Galerie Gladbeck (2013), at the Staatliche Kunsthalle in Karlsruhe (2011) and in Switzerland at the Kunstmuseum in Winterthur (2007). In 1999, she participated in the Venice Biennial in dAPERTutto (curated by Harald Szeemann). Her works can be found in numerous public collections in Switzerland (Kunstmuseums, Winterthur, St. Gallen, Lucerne and Bern; Aargauer Kunsthaus, Aarau), in Germany (Kunstmuseum, Bonn; Museum Folkwang, Essen; Staatsgalerie, Stuttgart) and in the United States (Los Angeles County Museum of Art; Albight-Knox Art Gallery, Buffalo; Detroit Institute of Arts). Fries received the Fred Thieler prize (Berlin) in 2009.
www.peterfreemaninc.com