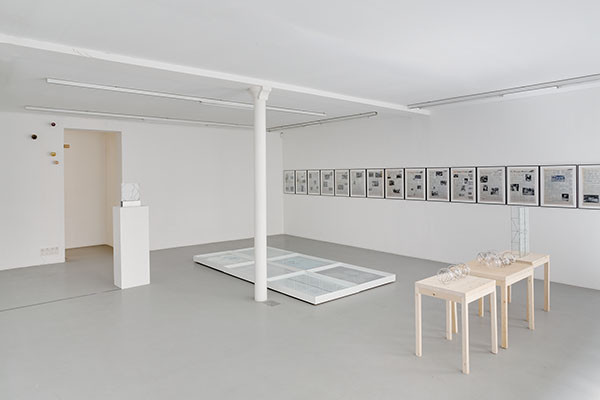 The Galerie Nelson freeman is pleased to present Push pins in elastic space, an exhibition curated by the artist Gabriel Kuri, presented as part of the "nouvelles Vagues" season at Palais de Tokyo, Paris.

This exhibition brings together works that pull in two divergent directions. On the one hand, representations of chaos through amorphism or mutation; on the other, attempts to order chaos: systematic thinking trying to come to terms with, order, account for, or index potential ciphers in the flux of hazard, form and experience. Naturally what results from a dialectical pull of this sort is the opening of a discursive grey area in the middle, in which some of the pieces unstably dwell.
In every work of this heterogeneous group that includes sculpture, documented actions, photography, and video, there is a deliberate consideration of process and openness, as well as the expression through geometric language. The earliest work in the exhibition is from 1960, whereas the most recent will be produced for this occasion.

Some of these works have been observed and revisited by Gabriel Kuri over the past twenty years, whilst others are more recent discoveries for him. As a group, they shed light on a series of questions that Kuri also poses within his own sculptural praxis, that span from the abstract to the social, the logical to the intuitive.
Rather than an attempt to devise a framework and find works to illustrate its thesis, this exhibition has come together as a chapter in the ordering of intuition over a long period of time: some sort of assessment of the vectors of force behind a number of like-minded and inspiring works by other artists.
The exhibition space will be used as the title suggests, as an elastic space in which demarcations will constantly shift, somewhere between the spatial limitations dictated by some pieces, and the reticence to conform to physical boundaries of others.

Strutturazione Fluida (1960) by Gianni Colombo is a small kinetic sculpture in which a thin metal strip moves in and out of two slots. The mechanism allows for this strip to coil into random bubble-like forms. As a sculpture whose form is in constant transformation, this work embodies one of the main ideas behind the project.

In a similar manner but in an entirely different scale and materiality, Cloud Canyons (1997) by David Medalla, also presents a shape in constant transformation. In this sculpture, whose first iteration dates back to 1963, soapsuds spit out and lightly fall, redefining its shape continually. In Michel Francois ́s video Déjà vu (Hallu) (2003) the artist manipulates a simple piece of aluminum foil in front of the camera and mirrors the image to a Rorschach effect.

On the other side of the spectrum, in an effort to pinpoint moments in the flux of chaos, form and experience, John Divola broke into abandoned houses within the noise restriction area of the Los Angeles airport and carried out a systematic photographic record. The result is a rational description through a series of images showing mostly interiors that strikes for the violence of its geometry (LAX NAZ, Forced entries, 1975). In another photographic work, Five Problems (1992), Gabriel Orozco documents a simple action that he carried out in the seemingly endless sea of consumer goods in a super market. With a modest gesture consisting of placing five potatoes on top of five sketch books – then captured by a photograph – Orozco manages to make a statement of great poetry and transcendence.