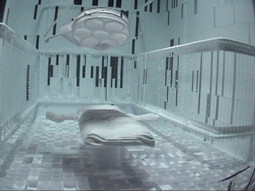 Five video works by artist Saskia Olde Wolbers from the Goetz Collection will be presented in a complex projection arrangement. These aesthetically remarkable experimental films all follow the same basic pattern: a voice off narrates a story that is visualised in fictitious and predominantly organically formed, self-contained spaces. The scenes are atmospherically underpinned by psychedelic and natural sounds that echo the biomorphic forms. Slow camera movements draw the viewer into surreal worlds, mostly portrayed in monochrome, whereby word and image do not necessarily correspond.

Olde Wolbers is inspired by reports of people with extraordinary life stories, which she expands and alters, for she works on the borderline between reality and imagination. In Placebo (2002), for instance, she shows the story of a man who tricked people for years into believing he was a doctor. His story is told as a monologue from the point of view of his lover who appears to be in a hospital ward beside him following a car accident. Although they are two separate and distinct works, there is a clear connection here with Interloper (2003), which tells this complex love story from the point of view of the man.
Another work centred on constructed identities and the quest for truth is Trailer (2005) in which the narrator goes in search of his biological parents. In a film trailer, he notices some jungle plants that bear his name, and that of his parents. Through this, he discovers that he is the child of two Hollywood actors who died in the South American rainforest.

In Kilowatt Dynasty (2000) the unborn child tells the love story of its Chinese parents -- a TV host and an environmental activist. The underwater scene is set in a television station flooded in 2016 during the creation of the vast Three Gorges Dam project. The narrative takes place in the future and addresses the phenomenon of the inverted dream syndrom in which sleeping and waking states become confused. Another inversion, this time of emotions, is the subject of Day-Glo (1999) in which a Spaniard, Luis, describes in a letter, read out loud, how his affection for his wife Carmen has dwindled because she has distanced herself from him emotionally over the years.

In a process that can sometimes take years, the artist constructs the miniature sets for her fantasy world in painstaking detail. She films without a script, often submerging the film set in a tank filled with water.

Saskia Olde Wolbers was born in the Netherlands in 1971. She lives and works in London, where she graduated in 1996 from the Chelsea College of Art & Design. Since then, her work has regularly been shown in solo and group exhibitions at renowned museums and galleries throughout the world.
www.sammlung-goetz.de