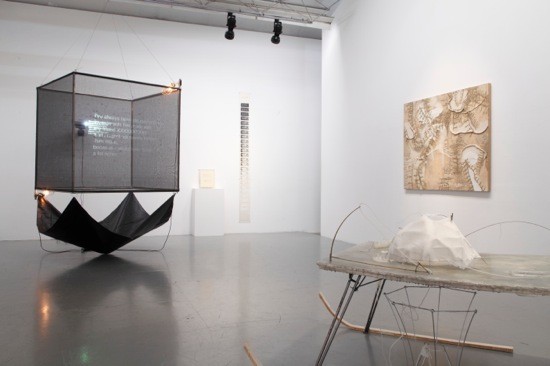 The exhibition takes the decade of the 1960s as a historical point of reference – an unprecedented period of artistic incubation advancing art as a means for experimental social devices. By disturbing previously accepted social, economic and cultural systems, the Japanese avant-garde sought to provoke reaction to conflicts and frictions. The exhibited works by their contemporaries resonate with ideas of social engagement, but do not necessarily privilege direct physical involvement. Instead, they arbitrate an interrogation through strategies of mediation, delegation and intercession. Double Message maps out these entwined relationships and influences by the Japanese avant-garde on younger generations.

Ironic wit, unconventional methods, and provocative themes are central to the strategies of Neo-Dadaists, who explored decadent aesthetics informed by materialistic chaos, paradox and the absurdity of modern life. Nakanishi’s Compact Object (1960) is a lifeless egg of polyester resin fused with detritus of industrial consumerist society; while Arakawa, in his wooden Coffin (1960), arranged the disposition of glass beads on the bed of wool - a symbolic gesture of memento mori tinted by existential angst and a primordial sense of mortality.

The subjective position and outward explosion of energy that characterized this era was often mediated and examined through use of the artist’s body. Homology (1964), a plaster torso sculpture by Akasegawa exemplifies his distinct awareness of sexuality expressed as a visual pun. A concise presentation of his thoughts is prevalent across all media, from photography to advert posters and manga, incorporating light satires with the frequent use of double takes seen in work such as Thomasson Apocalypse (1988).

For Tsuchiya, salvaged refuse of industrial materials become objects of personal attachment, which entail their own versions of narratives. Silicon SANPO Ruler (2007) is a large-scale junk assemblage of poetic accuracy, improvised by chance encounters with scraps of material. The unbalanced tension and discord among objects are left untouched, resulting in an untamed colony of imaginary organisms referencing the breath of life.

Courbot’s Needs (1999) is a photographic series of documentation, in which the artist carries out voluntary work as he finds a ‘need’ on city streets. Izumi’s Finland (2007) - randomly titled on a whim – is a DIY experiment with a TV screen and a jug of water. Absurdity meets slapstick humor in Izumi’s work, as well as in Courbot’s photography, where self-portraiture composes a critical reflection constructing the metaphysics of the everyday.

Referring to Hans Haake’s Condensation Cube (1963-65), Kawakami extends the metaphor of the water cycle to the relocation of wealth in a market economy. The scrim-covered hanging cube, Survival of Adaptable (2013), alludes to today’s income inequality at the same time resolving hostility between the rich and the poor - questioning the very nature of the economic system in the shadowy days of capitalism.
www.scaithebathhouse.com