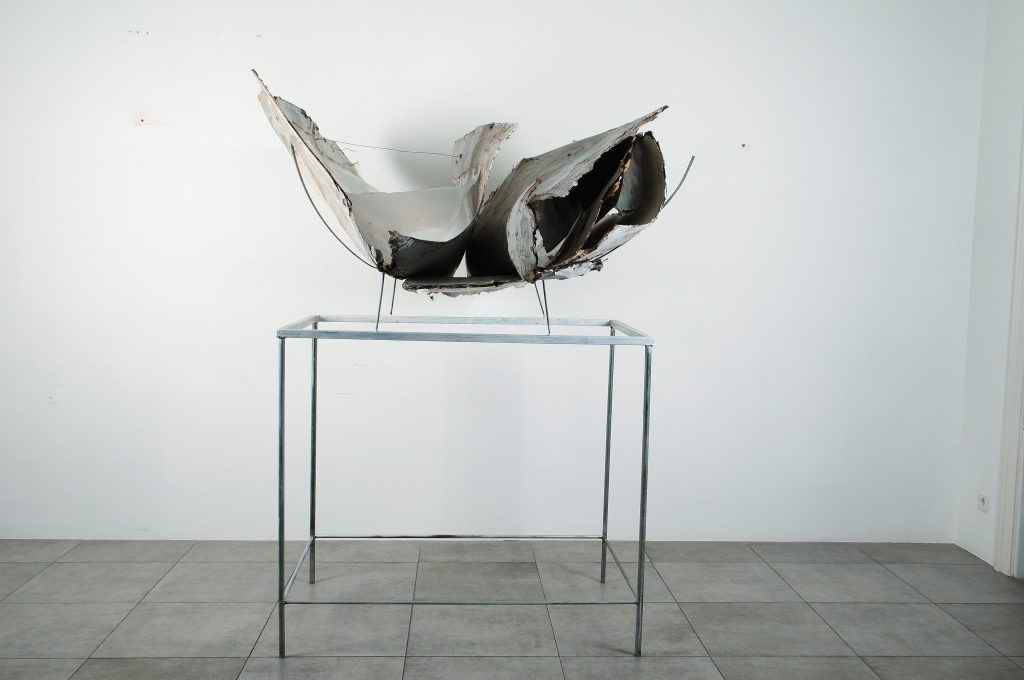 Since the mid-1970s, Rudolf Polanszky has created a multifaceted oeuvre in a range of media that extends from conceptual film, video, and photography to drawing and painting, sculptural objects, and assemblages. His art is informed by the intentional and even methodical integration of the accidental. Of particular significance is the incorporation of materials that show traces of usage or have been exposed to the elements: they in a sense encourage the artist to abdicate control over the emergence of form and undercut his constructive-creative will.

Polanszky’s fascination with scientific explanatory models in conjunction with his skepticism of an ostensibly imperturbable logic’s claim to interpret the world has prompted the artist to devise various schemes of comprehension. Guided by the idea of renouncing the making of meaning, they manifest themselves in intuitively constructed objects the artist sees as tentative embodiments of mental-linguistic formations. Hence Polanszky’s keen interest in simulacra and phantasms. Against the principle of determinacy he posits a kind of “hypothetical interim” meant to remind the beholder of the mutability of structures.

Polanszky first broached questions of perception/cognition, fallacy, and illusion in early Super 8 films such as Die Semiologie der Sinne (The Semiology of the Senses, 1976) and Der musikalische Affe (The Musical Ape, 1979). These works show him experimenting with filmic composition, deconstructing it in a variety of test setups, and manipulating its perception. The Sprungfedernzeichnungen (Coil Spring Drawings) and Sitzbilder (Seating Pictures) from the mid-1980s accord a salient role to the gesture of randomness and relinquishing control in both conception and realization.

Since the mid-1990s, Polanszky has primarily worked with staples such as acrylic glass, metal, and plastic foam—materials he regards as “free,” as relieved of their original purpose or intended use. Superimposing and layering strata, interleaving, nesting, or folding elements, he creates wall objects and expansive sculptures. The artist’s term for this nonlinear procedure of spontaneously piecing together existing materials and accidental forms to produce a new structure is “ad-hoc synthesis.” His preferred technique, it yields models for “trans-linear” or “trans-aggregate” structures. Most recently, Polanszky, elaborating on his idea of translinear processes, has explored “prime spaces” in free spatial-sculptural translations of series of prime numbers—which are conventionally represented as linear sequences—as well as their counterparts, the so-called “negative spaces.”

The solo exhibition of Rudolf Polanszky’s art will showcase a selection of sculptural works and wall pieces from various ensembles to offer insight into the freethinking artist’s theories. Evident throughout will be his play with the inconstancy of assertion—from the abovementioned prime spaces across hyperbolic spaces, foldings, and loops to confusing mirror reflections and negative-positive structures. An artist’s book to be published in conjunction with the exhibition will contain selected writings by Polanszky in facsimiles and transcriptions, complemented by a critical reexamination in today’s perspective.