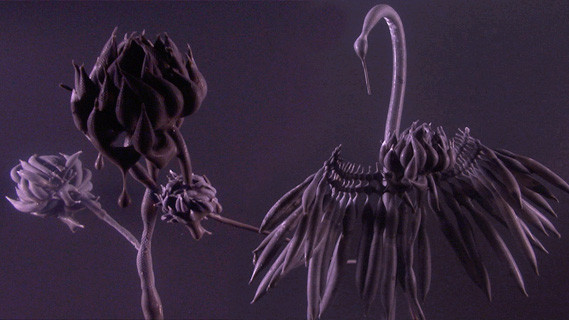 Bizarre free-floating narratives and hallucinatory visuals are the defining characteristics of Saskia Olde Wolbers' video works. Situated somewhere between illusion and reality, the narratives are based loosely on newspaper reports, documentaries or conversations from everyday life. The artist de-familiarizes and fictionally expands these sources and detaches the narrative from the imagery through the use of an off-screen voice. The oscillation between imagination and reality is heightened by monochromatic visual universes, which seem computer generated but are meticulously constructed scale models. Olde Wolbers' sets are miniature worlds, fabricated out of unusual materials such as fishing line, memory wire and cod liver oil pills, to form enclosed spaces and mysterious landscapes that recall the unreal worlds of Science Fiction. The sets are submerged in tanks filled with water and paint, and filmed using slow tracking shots. Olde Wolbers will be showing three works; Placebo , 2002, about a fake doctor, Trailer , 2005, and a new piece Pareidolia, 2010, which features animatronic birds and is set in 1930's Japan, relating the story of a German university professor being introduced to the world of Zen Archery. The exhibition at the Secession is the artist's first solo show in Austria.