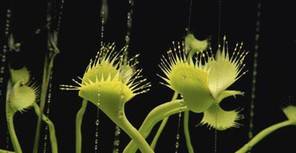 “Elmore Vella was suffering from what in the profession was called the “falling eye” ... In her presence sets would fold in, camera men tripped on wires... and whole rows of can-can dancers would keel off the stage like domino pieces.” (Trailer, 2005)

The Stedelijk has followed the work of the London-based artist since her debut ‘Mindset’ at Bureau Amsterdam in 2000. ‘The Falling Eye’ focuses on her latest videowork Trailer (2005). Stedelijk Museum CS is presenting this piece in the context of three earlier videos: Kilowatt Dynasty (2000), Placebo (2002) and Interloper (2003).

Olde Wolbers’ videos blend the visual with the spoken word. She writes monologues that form the soundtrack to images of science fiction interiors, landscapes and underwater worlds. While a voiceover narrates the fantastical, dramatic twists and turns of the protagonists’ lives, the camera languidly traverses the mysterious, desolate settings. Olde Wolbers’ tales are pure fiction, but have their origins in newspaper stories, television documentaries and everyday conversation.

Although seeming to rely heavily on digital technology, every on-screen detail is hand-crafted. Olde Wolbers films miniature decors submerged in aquariums. A small camera glides through the tiny models fabricated from plant forms and architectural structures fashioned from fishing wire, packaging and everyday objects. From start to finish – storyboard, model making, voice direction and editing – her films are very labour-intensive and often at least eighteen months in production.

Since her debut in 2000, Olde Wolbers’ body of work has garnered considerable international acclaim. She has been honoured with various art prizes including the Charlotte Köhler Prijs, the Baloise Art Prize and Beck’s Futures, the British prize for young artists.

Her work has been acquired and shown by national and international museums such as the SMAK, Gent, Het Domein, Sittard, The Aldrich Contemporary Art Museum, Connecticut, Kunsthalle St Gallen, The British Art Show, South London Gallery, ICA London and Tate Britain, London. Olde Wolbers is represented in the collection of the Stedelijk Museum with two works: Kilowatt Dynasty (2000) and Trailer (2005).

‘The Falling Eye’ is accompanied by the essay ‘Concrete Fiction’ by Arjan Reinders published in the Stedelijk Museum Bulletin. The Bulletin is available in the museum shop (NE/EN, € 5,-).