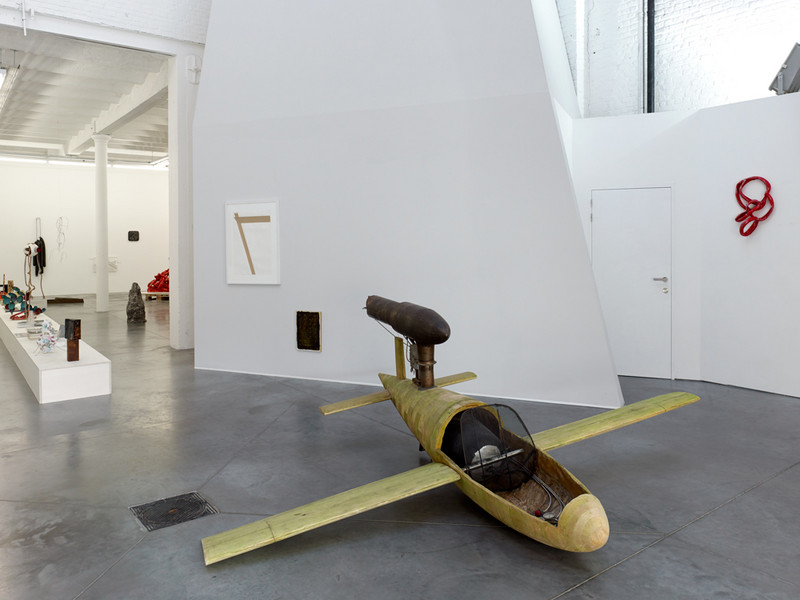 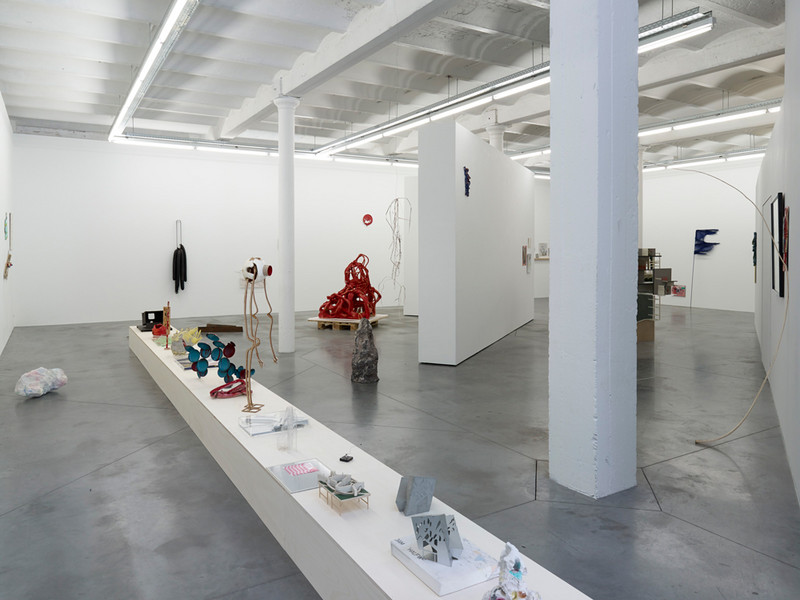 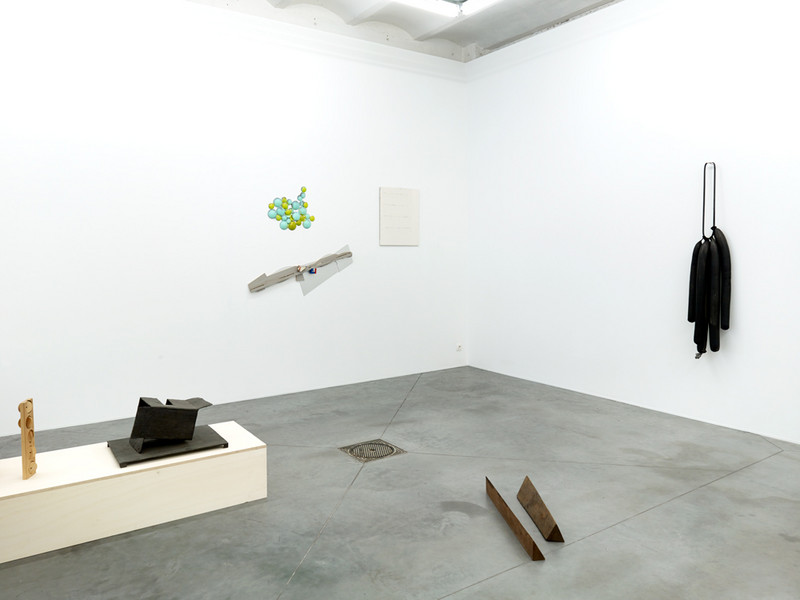 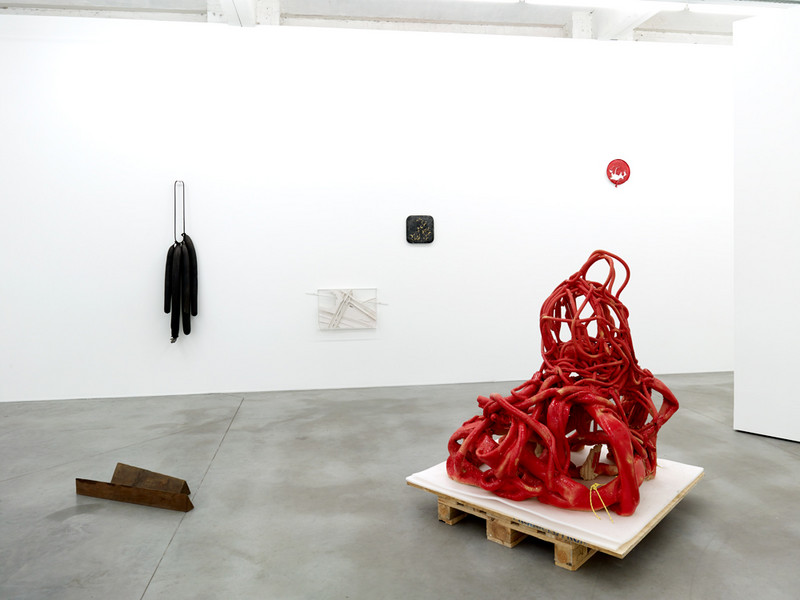 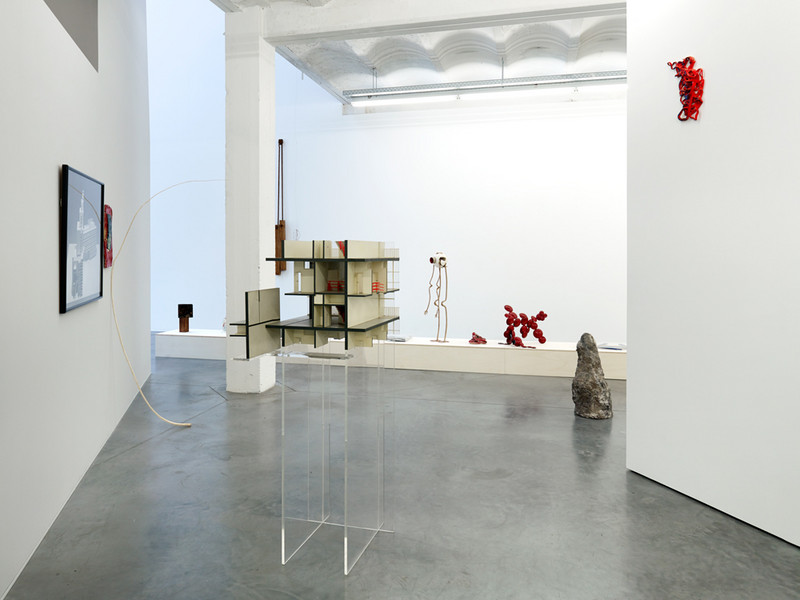 The New Candour !, curated by Hans Theys, Galerie Tatjana Pieters, Gent (BE) / Courtesy the artists & Galerie Tatjana Pieters / Photography by Kristien Daem
We are pleased to invite you to the closing drink of ‘The New Candour !’, a group show curated by Belgian writer Hans Theys in collaboration with Tatjana Pieters. They made a selection of new and historical works from three older and three younger artists, in the belief that all six have a similar way of working that accords with Rodin’s observation that ideas are but feeble stuff and that art, primarily, is about giving shape to your own vision on nature.

Panamarenko (1940, BE) mainly creates vehicles that, often for aesthetic reasons, don’t work in the way that they should. Time and time again he has asked himself why something couldn’t operate differently. He has therefore learned everything there is to know about batteries, electric motors, solar cells, explosion engines, exhaust pipes, fuses, acceleration and braking systems, gears, pedals, propellers and so on. His best works are the ones that he created as his own personal toys. To connoisseurs of the technical issues involved, the works come across as funny, daring reversals. For the art lover, they represent a widening of the existing art world, in the way that Beuys meant: the greatest possible freedom of thought. The works by Panamarenko in the exhibition include one of his favourite works, V1 Barada Jet from 1991 and Arlikoop from 2004. It was only possible to bring together these magnificent works, from two different periods, thanks to the special cooperation of the Deweer gallery in Otegem.

Another person who, like Panamarenko, gives an equally radical shape to freedom in his work is the architect Luc Deleu (1944, BE), and his bureau TOP Office. Freedom emerges from the core of their architectural and urban development objectives and achievements, which can be summed up in the words ‘order on a large scale, chaos on a small scale!’ Based on the truth that, over the centuries, cities and buildings are used continuously in ways that differ from the original intentions, Luc Deleu and TOP Office have developed theoretical exercises that assume the government will take care of the necessary infrastructures and volumes, and that the users will freely use them. Between 1994 and 2004 they designed a large section of a linear city, including volumes created from both vertical and horizontal versions of the same architectural unit, which slowly turn around their own axis, so that they can meet eachother and the infrastructure in an endless variety of ways. The exhibition shows mainly maquettes from 1984’s Barcelona Towers, and the Unadapted City (1994- 2004) project that evolved from this.

Bernd Lohaus was born in 1940, in Dusseldorf (DE), where he trained as a conventional sculptor before taking Joseph Beuys’ classes at the Academy. His first exhibition took place in Madrid in 1965.Lohaus’ graduation work, amongst others, was composed of two pieces of wood, one of which was the result of an attempt to replicate the other. This theme often returns in his work, for example when forms give the impression of resembling a ‘serious’ form, such as a square or a triangle.
Lohaus’ work can be described as a series of decisive incisions, which terminate a time of looking and thinking. At the same time these incisions shiver on the surface. Lohaus works with very hard wood that does not lend itself easily to manipulation. His inscriptions are minimal. Sometimes the wood is simply marked with chalk.
The shallowness of the inscriptions lends Lohaus’ work an architectural dimension. The sculpture becomes an object with a fascinating skin that, in close up, resembles a landscape. The bronze sculptures are architectural models for gigantic stacks: altars, chapels and megalithic tombs.
In the exhibition, we include Lohaus’ graduation work from 1965 (!), the very last sculpture he was making (the cardboard and wax model for a bronze wedge) and various other works including a collage, a work with rope (ca. 1968), a horizontal sculpture with azobé wood beams (Beersel, 2007) and a fruit crate cast in bronze (ca. 1999).

The work of Rein Dufait (1990, BE) is created in his studio, almost despite himself, like a virtually autonomous, insidious spreading out of the materials and tools that a sculptor gathers around him. On numerous objects and materials we recognise the marks made by an axe, seemingly randomly made, but at times leading to the most surprising textures. Because Dufait’s sculptures are the result of a series of sculptural acts, they are also witnesses to their creative history and have something to say to us about sculpture. A fine example is the sculpture Wespermes, which was first exhibited in the group exhibition About Laughter (Lokaal01, Breda, 2011). It is made from casts of rubber gloves, which were stacked in a fluid form, like a tower made from hands. Sculptures are created by the removal of matter from a volume, or the addition of it to a core. This is evident in the stacking of the hands, the hollow forms of which fold over each other’s convex exteriors. The sculpture was later ‘modified’, by leaving it alone in the studio for a while, to move it, to see it fall, to use it as a counterweight, to save, to kick it, to caress, to throw it away and to save it once again. After this painstaking ‘mistreatment’, virtually all of the fingers had broken off and the hands were barely recognisable as such, yet the sculpture (in a sculptural, ‘negative’ sense) expresses even more about the hands of sculptors and the emergence of sculptures.
Works in the exhibition by Rein Dufait include his first bronze: the cast of a concrete pole that was poured into the deepest, narrowest pit possible, and which was then torn out of the ground with a tractor.

Kasper Bosmans (1990, BE) mainly makes paintings, but also sculptural interventions. As with Rein Dufait, his works are like fruits that tumble down from a sustained activity that, just like Panamarenko and Luc Deleu, is not primarily directed at making art but towards experimenting with new forms and pursuits as a way of entertaining themselves. Last year, Bosmans built a smoking room in order to smoke paintings with a ‘gradation’. But in recent years he has also made works with, for example, feathers, horsehair, magnets and fishing weights. Included in the exhibition, amongst other things, is a beautiful monochrome painting by Bosmans (five by four metres high) that was originally painted as an altarpiece for the St Charles Borromeo Church in Antwerp. ‘Art,’ says Bosmans, ‘is decoration that makes you cleverer.’

Tamara Van San (1982, BE) makes beautiful work, in which the beauty is lured out of her cave and entangled in a graceful free fall. It is real work, that does not seek to answer academic questions, but which forms traces of an existence related to the world – in which there is a simultaneous love for beautiful and dark things, which can range from the smallest piece of coral to Picasso’s plaster print of a wad of paper.
Van San’s sculptures are created from materials such as polyurethane, balloons, balls, tape, bamboo, textile, cotton wool, candle wax, plaster, wool, rope, reinforcement bars and polyester. She creates new, unprecedented forms that are often surprisingly coloured and which are primarily self-referential. She steadily builds up a private world composed of objects that, through their creation process, reference each other and make statements about sculpture. Furthermore, the traces of this creative process are often visible as eruptions of the sublime, which at the same time both undermine and strengthen an apparently light-hearted approach.
Just as all spoken language is comprised of meaningless sounds and gestures that only acquire a meaning through their arrangement and use, Tamara Van San builds an epic story through countless verses – turning, pulling and pushing shapes that speak to us without words, but that are sung continously in the ungarded rooms of our souls.
The central work by Tamara Van San in the exhibition is a monumental ceramic sculpture created at the EKWC European Ceramic Work Centre in ‘s-Hertogenbosch, which is shown alongside smaller ceramic works and steel works that were created recently.

The gallery would like to thank the Bernd Lohaus Foundation & Deweer Gallery for their generous collaboration.
www.tatjanapieters.com