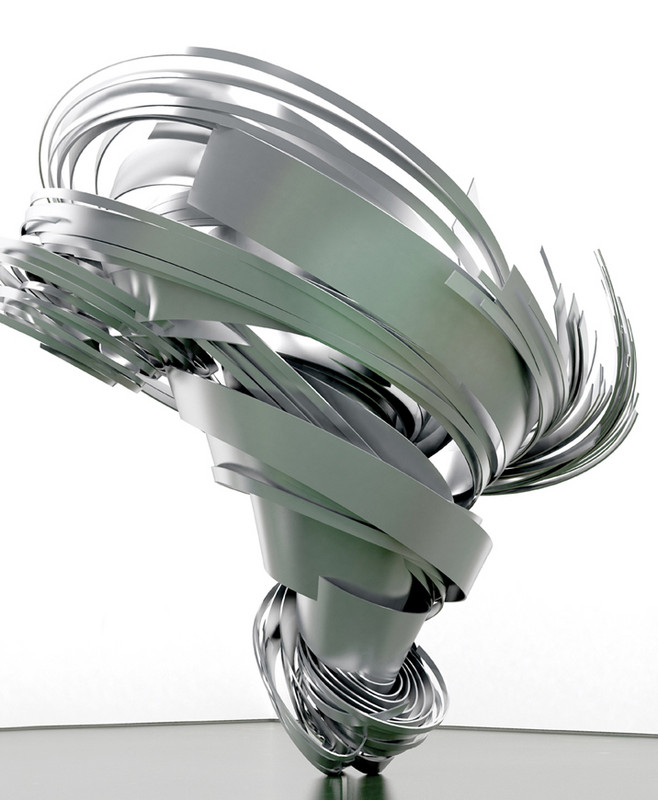 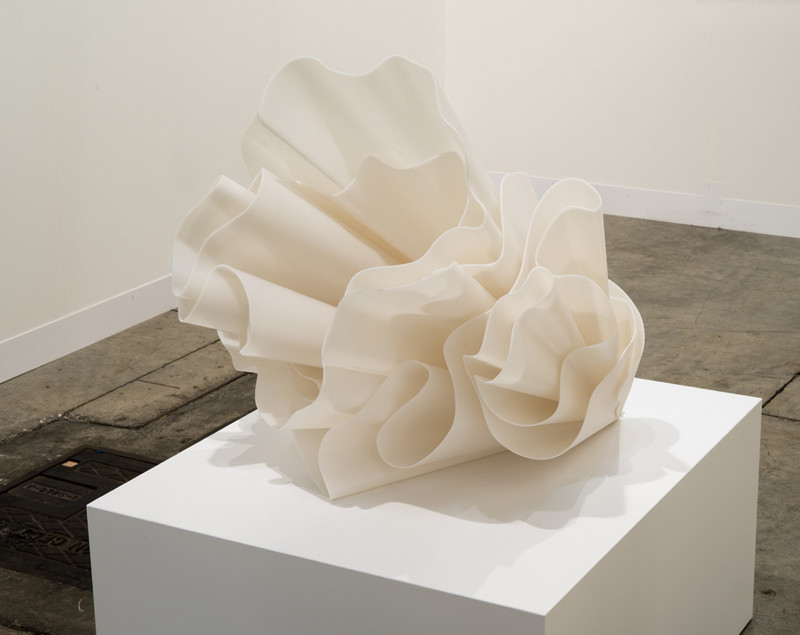 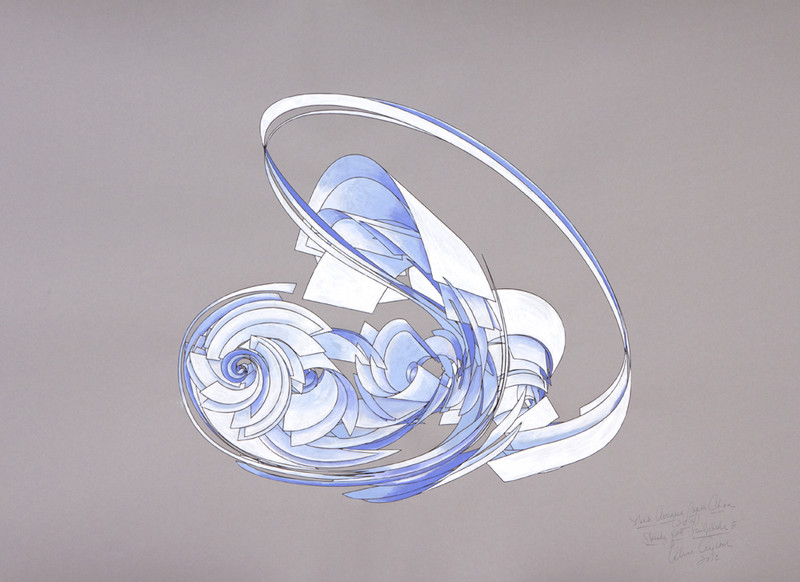 Alice Aycock
Park Avenue Paper Chase (2014) Study for Sculpture E, 2012
Watercolour on grey paper
61 x 81 cm
Courtesy: The artist and Galerie Thomas Schulte, Berlin
In line with this year’s Gallery Weekend Berlin (April 26–28), Galerie Thomas Schulte presents its third solo exhibition with the American sculptor Alice Aycock. The exhibition will open simultaneously with two extensive shows of the artist’s drawings at the Parish Art Museum as well as the Grey Art Gallery in New York. The artist will be present at the vernissage on April 26.

As one of the youngest members of the artist group around Gordon Matta-Clark and the 112 Greene Street Gallery, Alice Aycock reached international acclaim early on, gaining attention in the 1980’s for her large-scale mechanical installations. Since the start of her career within the bustling New York art world, Alice Aycock must be counted as the forerunner of many female artists who have conquered the male-dominated sculpting scene. At the same time, Aycock belongs to a generation of artists that have appropriated and questioned the technological and positivist approach of western civilization. Like many artists in the modernist tradition before her, she explored non-western cultures while concurrently grappling with traditions in architecture, science, and the arts.

Aycock’s artistic beginnings are found primarily in Land Art, where she, through the use of natural and building materials, was able to create architectural and semi-architectural sculpture and installations. Later, she increasingly turned to mechanical sculptures and apparatuses, stating, “Much of my work in both the public and private spheres has been a meditation on the philosophical ramifications of technology from the simplest tool (the arrowhead and the plow) to the computer. Many of these works have incorporated images of wheels and turbines and references to energy in the form of spirals, whirlwinds, whirlpools, spinning tops, whirly-gigs, and so on.“

In this regard, the large-scale aluminum sculpture Super Twister II, standing as the central focus of the exhibition, may be described in similar terms. As part of Aycock’s oeuvre, this work belongs to a series of recently developed sculptural assemblages, seeking to make visible the force of wind. Super Twister II stands in close relation to Aycock’s Park Avenue Paper Chase Project, which the artist will finalize in New York next year between 52nd and 57th street. The six dynamic and spacious sculptures developed for this project embody wind energy as well as the forces of colliding thoughts and ideas that continuously flow through the city and its streets. Resembling waves, currents, tornados, and turbines, the sculptures are a metaphor for the energy of the city. At the same time, Aycock makes reference to paper-models that are made by architects and were once used by the Russian constructivists to visualize artistic ideas.

Next to Super Twister II, the gallery will also show a selection of drawings, created in the context of the Park Avenue Paper Chase Project. Although the artist is primarily known for her large-scale outdoor installations, drawing has always served as an important platform for experimentation and the development of artistic thought processes. In drawing, Aycock not only visualizes her sculptural forms but also allows the drawing to become a performative work on its own. “Aycock is an artist who thinks on paper, and her spectacular drawings are equal parts engineering plan and science fiction imagining. (...) Concurrent with most drawings for actual public projects, Aycock has become increasingly preoccupied with virtual reality, and her current work addresses a blurring of the real, the imagined, and the almost-real, allowing us to, in her words, transport ourselves ‘farther into another place’.“

Alice Aycock was born in Harrisburg, Pennsylvania, lives and works in New York City. Her work was presented in solo shows at the Museum of Modern Art, NYC, the Museum of Contemporary Art, Chicago, and the United States Pavilion at the Venice Biennale (1980). Major group exhibitions include the 1979 and 1981 Whitney Biennials in NYC and Content: A Contemporary Focus, 1974–86 at the Hirshhorn Mu-seum & Sculpture Garden, Washington D.C. In Germany Aycock was first presented at Documenta 6 (1977) and in 1983/84 in a comprehensive travelling exhibition at Württembergischer Kunstverein, Stuttgart, Kölnischer Kunstverein, Cologne, and Skulpturenmuseum, Marl. After more than twenty years Galerie Thomas Schulte presented in 2010 the first exhibition of the artist in Germany in the gallery’s space in Berlin. Recently Aycock’s work was included in the first major museum survey on Land Art Ends of the Earth: Art of the Land to 1974 at the Los Angeles Museum of Contemporary Art and the Haus der Kunst in Munich (2012) as well as Materializing ‘Six Years’: Lucy R. Lippard and the Emergence of Conceptual Art at the Brooklyn Museum (2012/13). An extensive catalogue on her drawings has been published in conjunction with her retrospective at the Grey Art Gallery (New York University) and the Parish Art Museum. The exhibition will be traveling to the University Art Museum at the University of California, Santa Barbara, and the Santa Barbara Museum of Art in 2014.
www.galeriethomasschulte.de