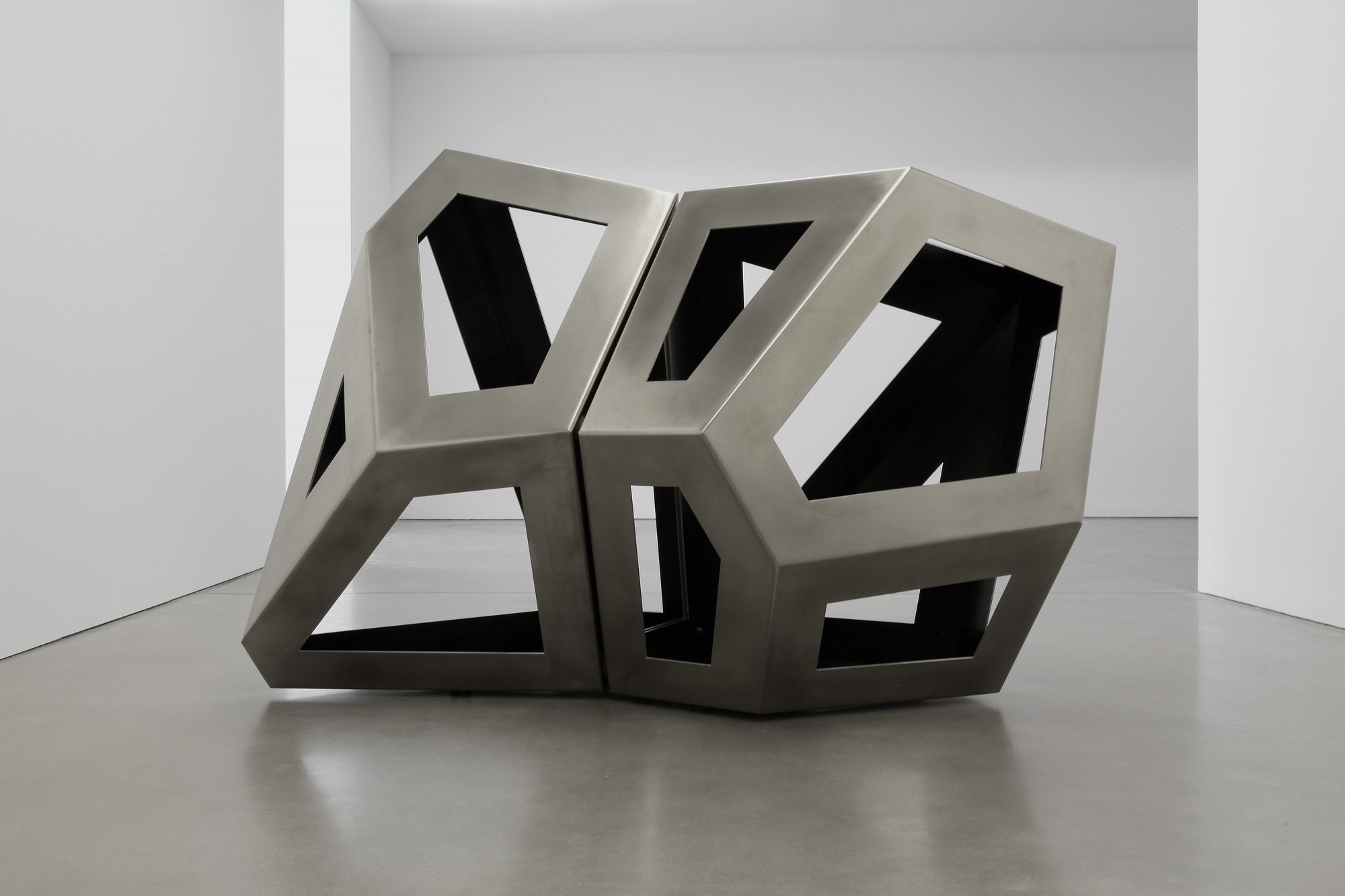 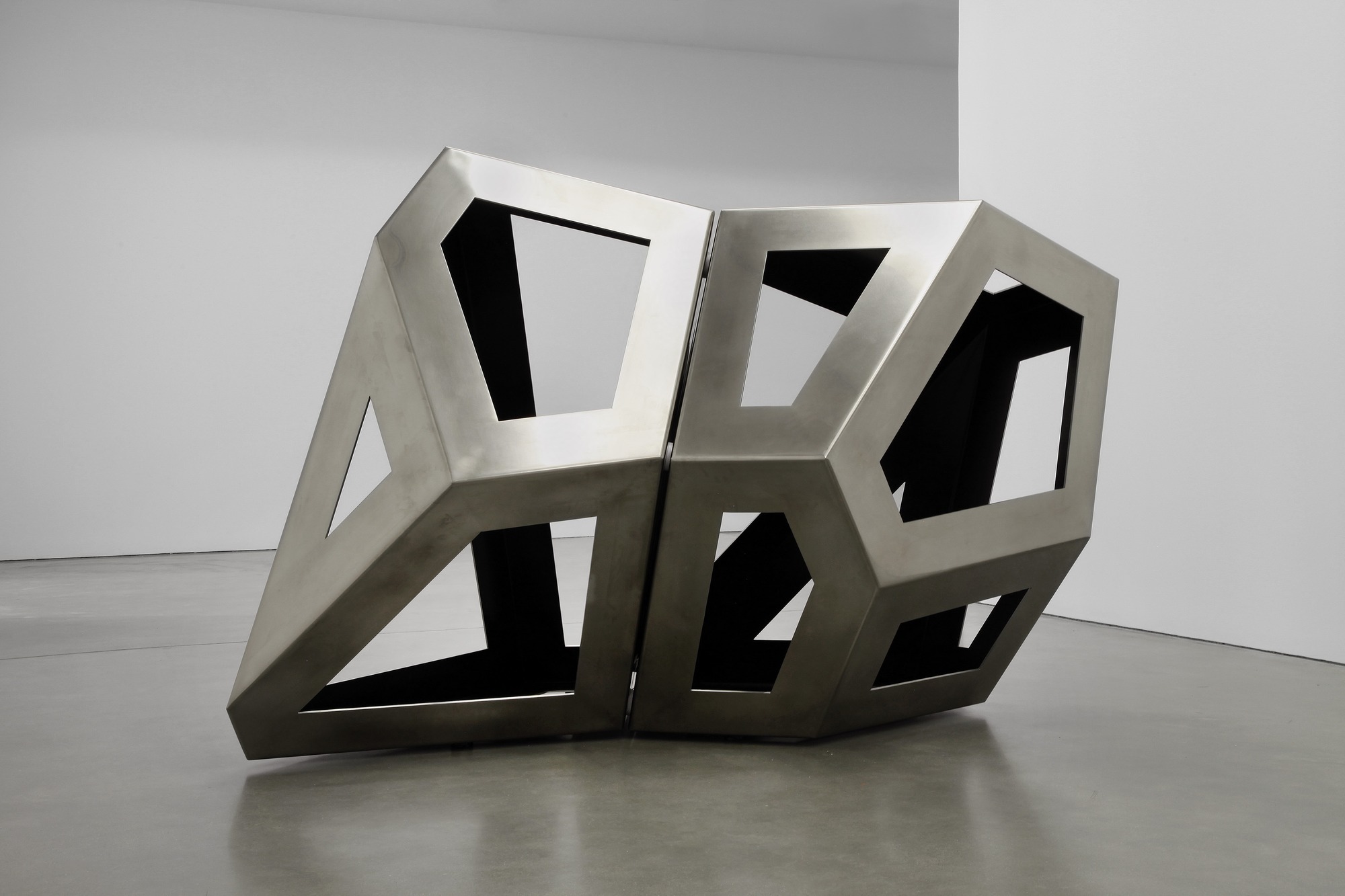 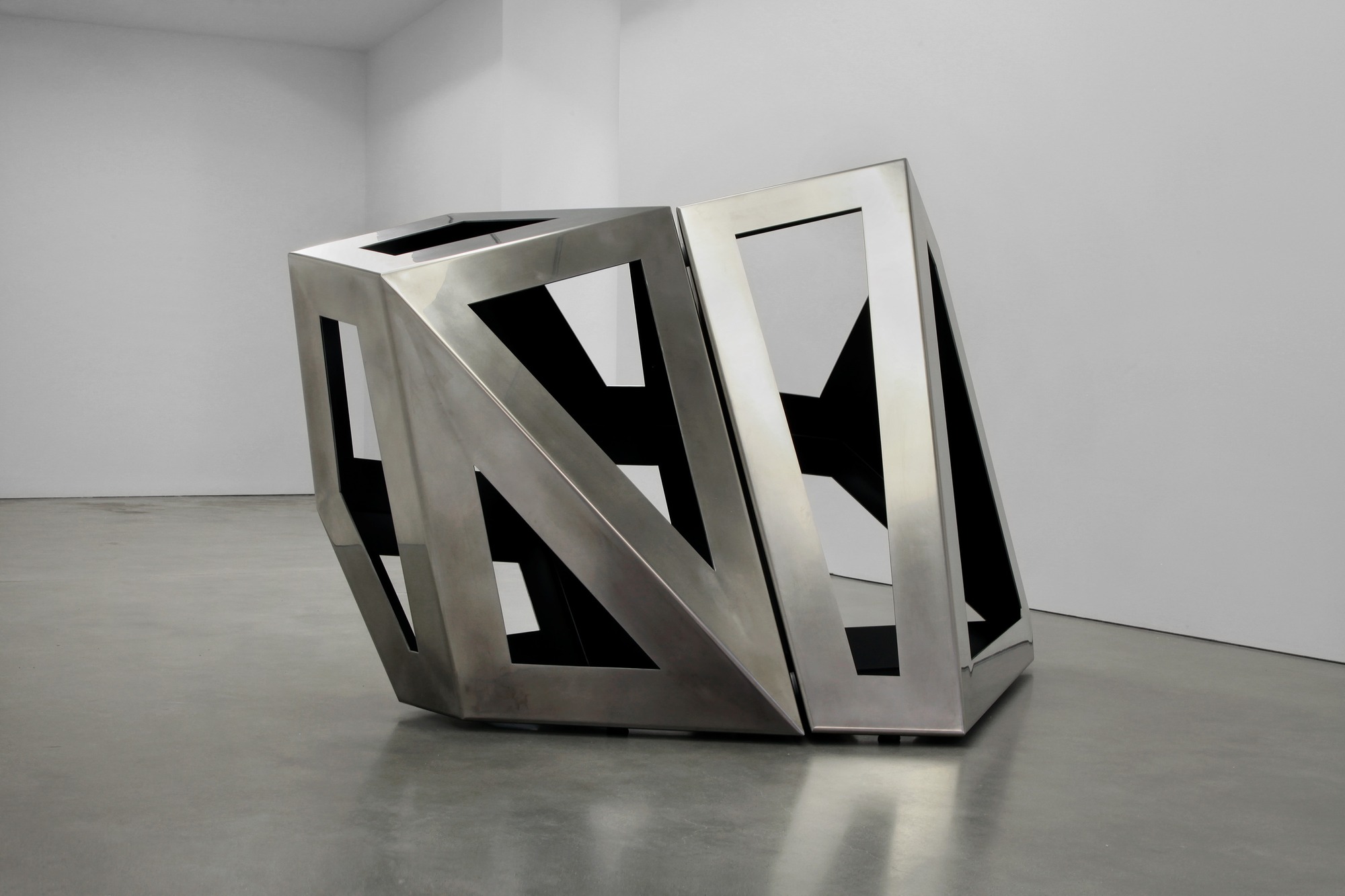 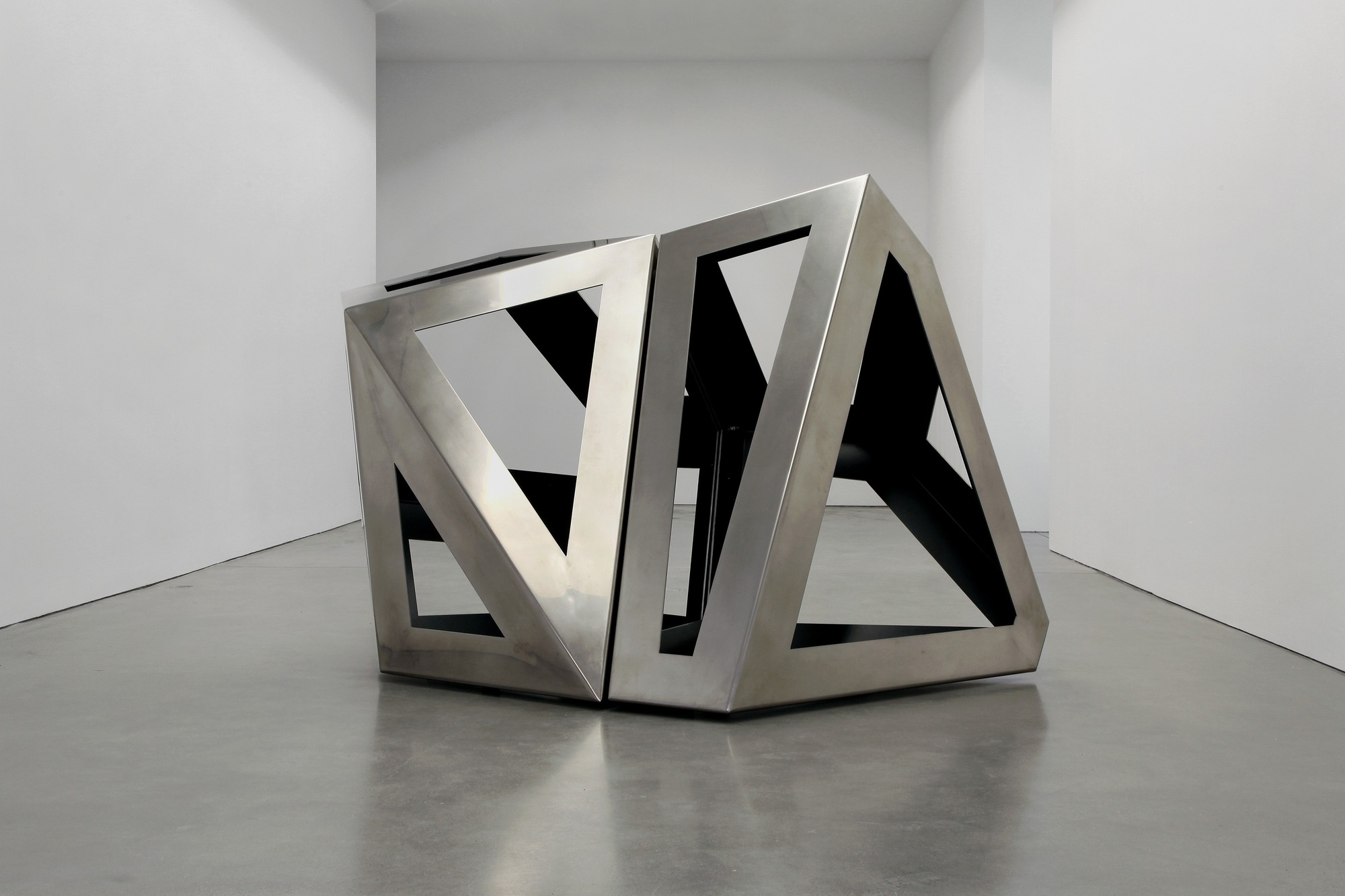 Richard Deacon, Fourfold Way, Installation view at Galerie Thomas Schulte 2021, © Marco Funke
Galerie Thomas Schulte presents new large-scale stainless-steel works by Richard Deacon. The two sculptures, both titled Fourfold Way, are the latest in a series of complex, perspective-shifting skeletal frameworks that the British sculptor has been producing since around 2008.

Deacon, who refers to himself as a ‘fabricator’, is known for his use of a wide range of materials—from wood, marble, and stainless steel to foam, clay, and leather, among others. In Fourfold Way, he employs stainless steel once again; folded sheets are adjoined into abstract forms comprising irregular polyhedra. The objects’ constructedness is palpable in the final works—their seams remain visible. In Deacon’s sculptures, in fact, screws or glue used to attach and hold materials together are often left exposed, describing where and how the material has been acted upon—its precise relationship to form.

In tandem with this emphatic materiality, language, for Deacon, also plays an integral role. The titles of his works often reference or play on clichés and familiar phrases. They are ambiguous, like the abstract structures themselves. Fourfold Way, for instance, may at once refer to the series of folds in the stainless-steel sheets that produce the forms, or a path branching off in four directions.

Deacon has said that the skeletal frameworks developed from ceramic works in which he had hollowed out lumps of clay—starting with the material and taking some away. In reference to another series of small-scale sculptures titled Art For Other People (which he began in 1982 and for which he has used a variety of materials), he has remarked that, “Most are built around a material that isn’t there.” This interchange between working from the outside-in and inside-out, between positive and negative space, is visualized in large-scale stainless-steel frameworks like those in Fourfold Way. Fluctuations between inner and outer space, as well as the objects’ cast shadows and surface reflections, together with their modular-seeming construction, lend them a certain malleability—a mutating appearance.

Painted on the inside, their material—stainless steel—mutates, too—further underlining the relationship between interior and exterior through changes in texture and surface quality. Such dichotomies also extend beyond the individual works, as one is painted white inside, and the other black—forming a contrast between light and dark. While one sculpture is squatter, more compact, the other rises up sharply, almost cathedral-like. The two remain separate, and, at the same time, suggest parts of a larger whole.

Indeed, taken together, the sculptures may evoke embodiments of cosmic duality, or else architectural structures, networks, a pair of enigmatic entities. They are an open yet substantial presence in the space of the gallery: fluid, prone to shifts, though precisely articulated. Like opposite poles, they engage one another—in the process, pulling their surroundings, and us, into a field of rhythmic exchange.


The exhibition is supported by Stiftung Kulturfonds/NEUSTART KULTUR.