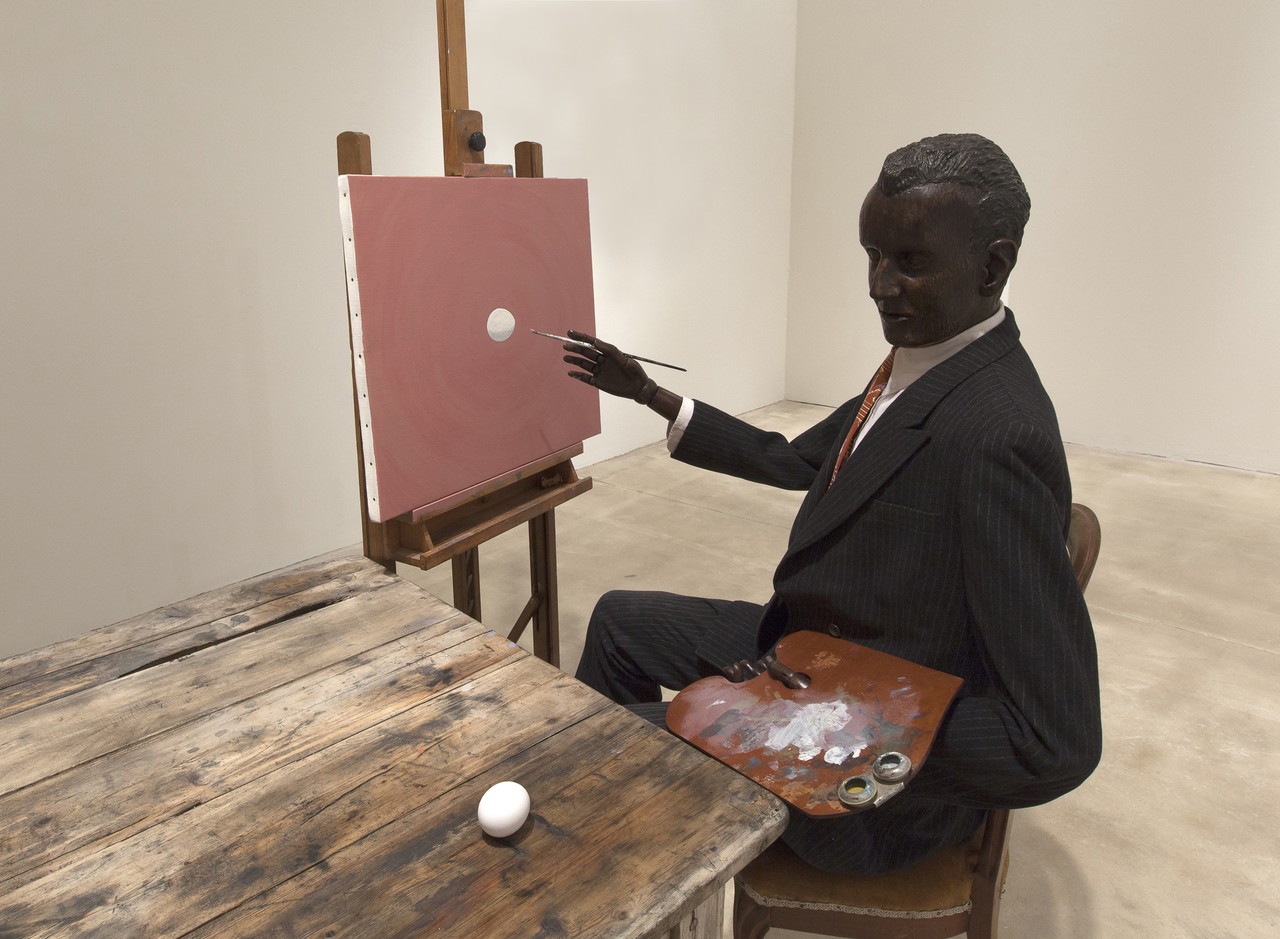 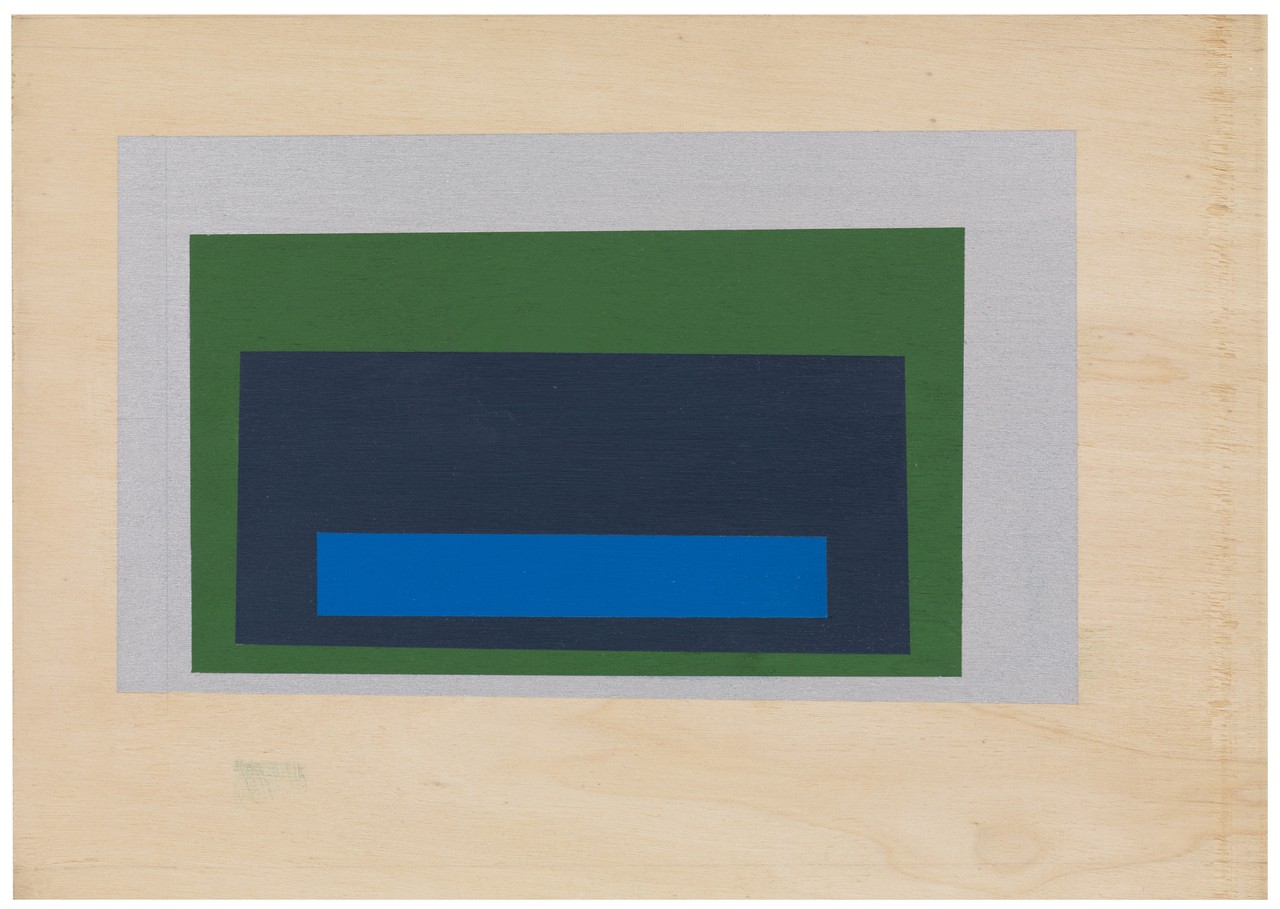 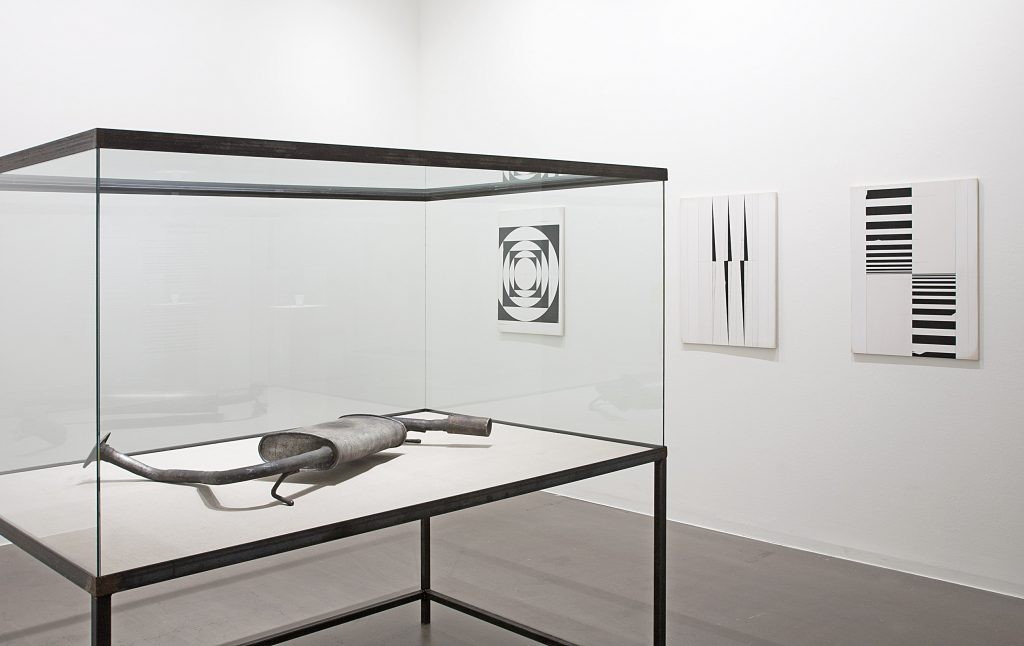 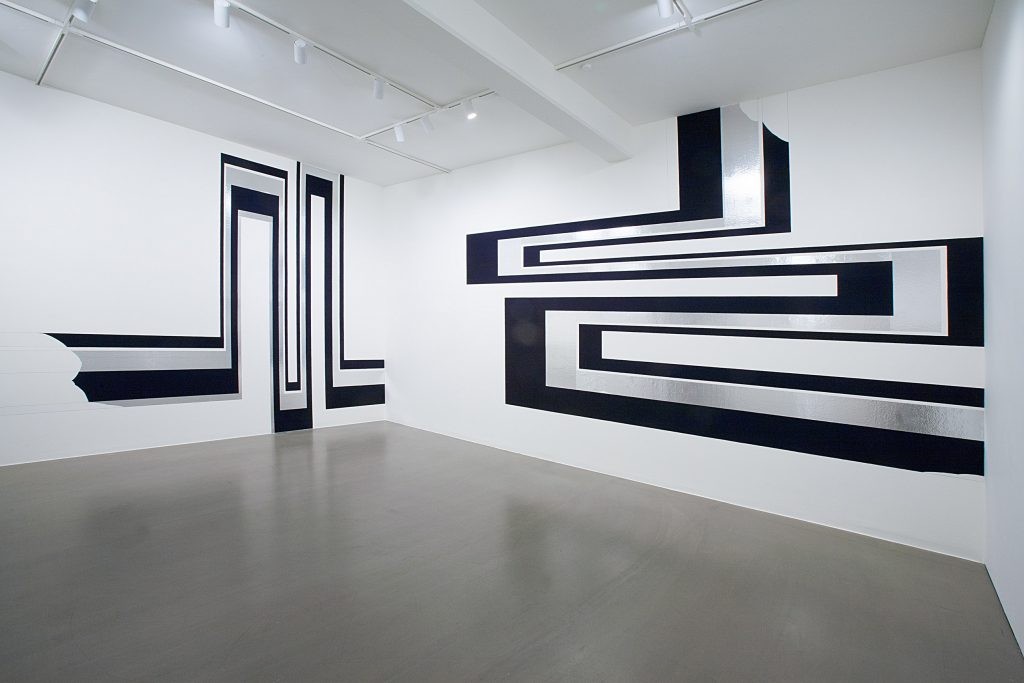 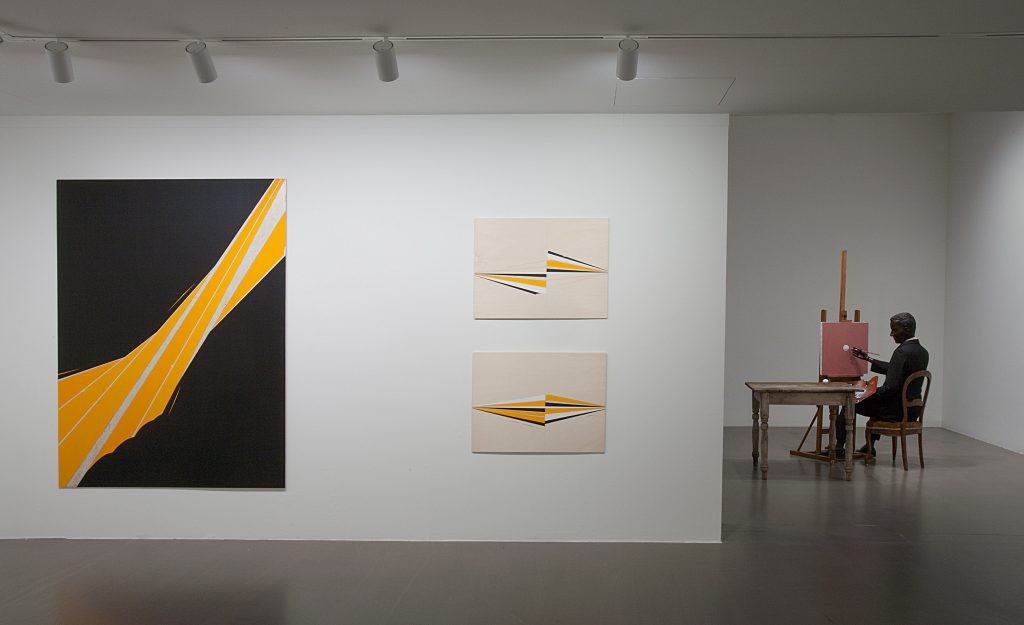 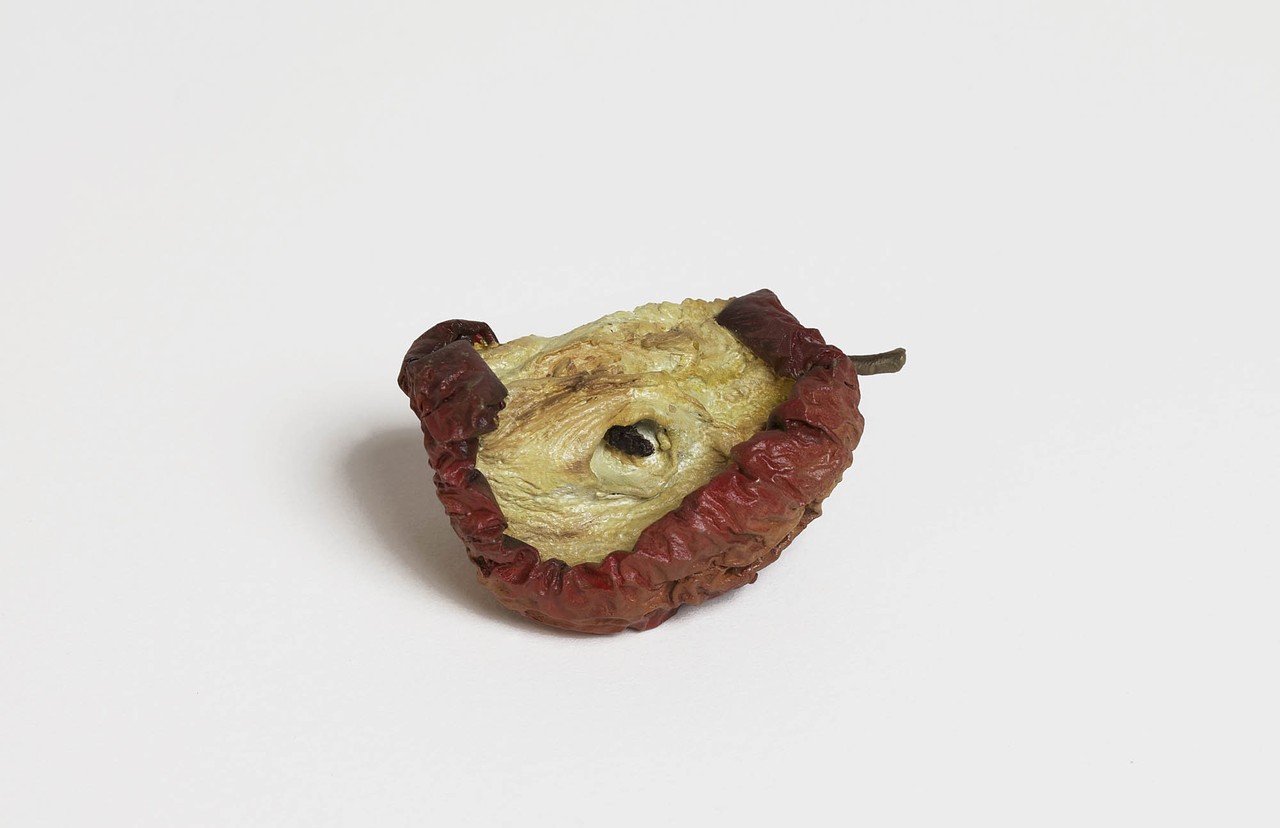 What is reality and where do its abstraction, original and copy, overlap? Today the boundaries are in flux and are repeatedly dissolving. With the exhibition, “Cracks in Reality – Gavin Turk / Jens Wolf”, Marta Herford presents two artists from its own collection whose works correspond with each other in dialogue form: Gavin Turk, who belongs to the generation of Young British Artists, and Jens Wolf, a representative of new abstraction in painting. Almost forty works, including large-format paintings, filigree sculptures and a temporary mural work created especially for the exhibition, open up a space to think about appropriation and imitation, all the while pointing up astonishing references to art history. Concepts of authorship and originality are scrutinized here by both artists with an ironic, critical undertone.

„All art is one way or the other appropriation – if only because it is seen in the context of art.” Gavin Turk
The British artist Gavin Turk works with so many different techniques, forms of expression and themes that it is hard to discern the signature of a single artist behind his work in which myth and self-staging play an important role. Turk made a name for himself with his graduation exhibition at the Royal College of Arts in London. In an empty white room he mounted a blue ceramic plate with the inscription “Borough of Kensington, Gavin Turk, Sculptor, worked here, 1989—1991”. With this gesture he was staging himself as an already deceased, well-known artist. Again and again Turk brings his own person into his work, for example when he models famous personalities such as Elvis Presley as a life-sized wax figure, and allows the face to merge into his own. With this self-staging he creates a myth around himself as an artist figure. The idea of the readymade also plays an important role: the exhibition presents apparently profane everyday articles in glass cabinets such as a roll of toilet paper, plastic cups or an exhaust pipe. It is only when we look more closely or read the information provided that we realize they are perfectly painted bronze castings. Other bronzes of a fireplace and a sleeping bag are distributed apparently randomly around the floor of the room.

There are also quite concrete allusions to artists such as Josef Albers, whose colourful nesting tables – designed in 1926 for the Villa Möllenhoff – Turk replicated in order to exhibit other castings of tubes of paint. The installation “Telesthesia” transfers the self-portrait “La Clairvoyance” (1936) by the surrealist René Magritte to three-dimensional space. Turk is not only taking a partially ironical view of authorship and authenticity, but with the assumption of these artistic ideas he is also questioning the traditional concepts of original and copy.
„With the appropriation I want to refer to my inspiration sources and highlight a section of the history of geometric painting.” Jens Wolf

With “Cracks in Reality”, however, Marta Herford is also presenting the painter Jens Wolf in his first museum exhibition since completing his studies at the Academy of Fine Arts in Karlsruhe. His work is connected to Gavin Turk among other things by the question as to the appropriation and engagement with historical role models in art. Wolf’s small-format, geometric paintings return to Josef Albers’ colour and form studies “Homage to the Square” (from 1950) as a theme. Through the interlocking of squares, Albers explored the basic effects of colour. Jens Wolf adopts the motif, but draws it out into a rectangle. Fine pencil lines, tiny irregularities or an overpainting of the edges of the rectangles can be seen if we look closely. Some of the edges of the plywood sheets have shipped off, thus dissolving the coherence of the format. The precise painting style and the clear forms are thus interrupted by constructed errors.

Role models for Wolf, who show through in other works exhibited, include the Hard Edge artists Frank Stella or Kenneth Noland, whose geometric forms and colliding colour areas he revisits in his works. Proceeding from motifs of two so-called pattern boards – a kind of model picture that Wolf makes for almost all his works – he also created a new mural for the Marta exhibition that creates a strong spatial effect. With silver foil and fabric Wolf transferred an ingenious play of motion consisting of steps and surfaces onto the wall, completely realigning the space.
www.marta-herford.de