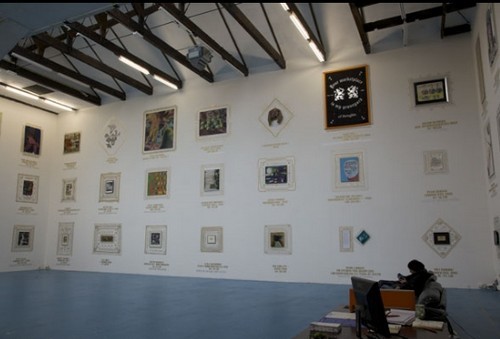 A collectors’ exhibition: a selection of art from the W139 “Within Reach” art collection programme.

W139 board members Matthijs de Bruijne and Rudy Luyters first suggested offering a programme on building an art collection first in 2004. They asked the then director of W139, Ann Demeester, to organize an event for new and potential art collectors in W139.

In conjunction with young collector Kai van Hasselt, Demeester developed a series of lectures given by major and more modest local and international collectors for a select public. When Demeester left to join De Appel the “course” in W139 continued, and has since completed its third year. So far, seventy collectors, many of whom have been faithful participants throughout the three-year cycle, have taken part in the programme.

The idea of a collectors’ exhibition surfaced as early as the initial chats between Demeester’s successor and Van Hasselt. The meeting with designers Job Wouters and Yvo Sprey led to an extraordinary exhibition concept. Wouters and Sprey are two young designers/illustrators, who produce all their drawings and typography by hand. Sprey’s clients include Amsterdam Weekly and De Balie, and Wouters’ design recently graced the cover of respected New York graphic design magazine Creative Review.

Wouters and Sprey designed the exhibition as an iconostasis: the works are surrounded by hand-drawn golden frames that fill the entire rear space of W139. Details about the artworks are also written by the designers, by hand, on the walls. The exhibition is accompanied by a catalogue that is a literal reproduction of the exhibition. Every piece in the book will be displayed on the walls of W139.

In selecting the pieces, each collector willing to loan work for the exhibition was visited, ultimately resulting in a selection of seventy art works for REMAIN IN LIGHT. Work was not chosen in accord with a specific theme or concept; the only criterion was that it had to be in the collection of one of the W139 collector/participants, and had to be suitable for wall mounting.

The works cover a broad spectrum: paintings, drawings, photos and videos acquired by collectors from galleries and at art fairs, alongside more unusual works. One collector has loaned a 17th century pastoral scene painted on cloth by an anonymous Bohemian painter bought at auction and restored by the collector herself. Other works include a piece of bootleg footage of Thomas Zipp’s recent London show WHITE DADA at Alison Jacques Gallery, shot by the collector using his phone, a tiled Jan de Cock cabinet used by its current owner as a filing cabinet, a bag containing Ryan Gander’s inventory list (zipped up and padlocked, with the key in the locked bag in the possession of a different collector), the first Orson & Bodil shawl from Bodil’s personal collection, a small sketch by Claes Oldenburg given to the collector while designing the park surrounding Oldenburg’s French chateau, a photo from Eva Fiore Kovacovsky’s graduation show bought at the Dead Darlings Auction in the W139 basement, an exquisite blue painting by Gerrit Benner given as a gift by the collector to her husband, two sections of a stamp sheet of Metahaven handed out during a tour of Stroom in The Hague.

Some of the pieces cost nothing and others are worth a small fortune. We want to show that a collection of contemporary art can start anywhere, and that a passion for and interest in art and artists is more important than money.
www.w139.nl