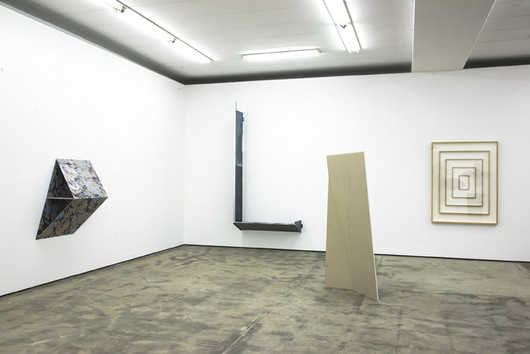 It has become noticeable that for quite a while now a younger generation of artists has been focussing on formal questions in their work. For them, the external form takes precedence over content, but in most cases the matter is by no means given up, but rather ‘hidden’, and often conceptual theories are assumed that refer both to reality and utopias. Taking recourse to a style that frequently stands for the avant-garde of the twentieth century, questions of authenticity, innovation, context, perception, and technique become evident. The use of unusual materials and contextual references makes these works so contemporary. Furthermore, there is a less academic, a more playful element here, and this is also where the exhibition’s title comes from: ‘Re-Invented: Study and Play’. It links a consciousness about references, both formal and in terms of content, with a simultaneous free handling of them.

Scott Myles (born 1975 in Dundee, Scotland) is exhibiting two works which are typical for the artist. The rectilinear form Reciprocity on Three Planes is attached to the wall and covered on all sides with a marble screen print technique. The application of paint to a post-minimalist sculpture brings with it a range of dull theoretical problems. Myles plays with the ideas of artifice, reflection, and illusion, in relation to the surface as formalist battleground.
The work entitled Upside-down Awning is for the artist an object between painting and sculpture, transforming a found object into an artwork by painting it, turning it upside down, and fixing it to the wall. There is in both works a sense of play and experiment rather than an oppressive atmosphere of high seriousness. Scott Myles had solo exhibitions at the Kunsthalle Zürich in 2005, at Galerie Meyer Riegger in Karlsruhe, and The Modern Institute in Glasgow.

Nathan Carter (born 1970 in Dallas, USA) works in a wide range, including wall reliefs, freestanding sculptures, mobiles, and works on paper. Maybe most characteristic of his work are the wooden reliefs that show various pathways of communication, constantly oscillating between narration and abstraction. Tiny colourful bits are reminiscent of real or fictive flags, and radio signals connect the different continents, however, any topographical decoding remains ambiguous. In terms of both form and content, these wall-mounted works show references to 20th-century U.S. cultural history.
In 2008 Carter had solo exhibitions at Galerie Esther Schipper in Berlin and Casey Kaplan, New York. Nathan Carter ́s work is part of the collections of the Guggenheim Museum, Tate Modern and Reina Sofia.

Germaine Kruip (born 1970 in Castricum, The Netherlands) has a fascination with light, architecture, composition, time and space. The exhibited work Counter Shadow is a fragmented static version of the sculpture created in the flat perspectival form of its own light reflections in a moment of transition. Counter Shadow is suspended from the ceiling and activated by a light shining directly onto it. The sculpture is echoed once again as shadows cast on the gallery wall. These shadows are fixed in the manner of a stage prop and in contrast to the moving light of Counter Composition and to the changing light conditions of the room.
This year, Germaine Kruip showed a kinetic light work at Art Basel’s Statements; in addition, she had a solo show at the London gallery The Approach.

John Tremblay (born 1966 in Massachusetts) first exhibited in New York in 1990, and has since then shown extensively in Europe, Japan, Korea, and the United States. He had various solo shows with Paula Cooper Gallery in New York and with Galerie Almine Rech in 2007. In 2008 his work was included in The Freak Show, Musée d’Art Contemporain de Lyon, France. In his works, John Tremblay reinterprets the 1960s plastic experiments (Op Art, cinetic art and minimalism), borrows shapes such as ovals or acid coloured 'squircles' (contraction of square and circle). John Tremblay's abstract paintings lead the spectator to an optical exploration of patterns and colours, thus creating a spatial game between shapes and background. His vigorous paintings give a feeling of movement and speed.
Though inspired by Op Art, John Tremblay also introduces a dialogue between the history of modern abstraction and developments of more recent contemporary culture. His paintings refer to graphic design, cinema, music and other elements of the consumer culture that also appear in the titles of his paintings.

Gregor Hildebrandt (born 1974 in Bad Homburg, Germany) works in different media. His pictures, installations and objects draw from music, film, literature, and art history. Using the magnetic tape from audio and video cassettes, he glues hundreds of strips together to create his Tonbilder, ‘sound pictures’ that allude to various musical sources. In small sketches, large canvasses, or the covering of an entire surface of a building’s facade, Hildebrandt’s Tonbilder transform audio recording into a visual experience. The rigor of Hildebrandt’s works causes only apparent associations with the formal reductions that have been known since the 1960s. His 2005 work Rahmen, Rahmen, Rahmen, shown for the first time as part of the group show ‘Study&Play’should be seen in this context. The wall object shows several picture frames placed into one another. Frames, which in art history originally marked the border between an artificial world and reality, here becomes a self-referential object in an exhibition. After shows at Kunstverein Ludwigsburg and the St.Louis Museum of Contemporary Art, Gregor Hildebrandt will exhibit works at Berlinische Galerie in 2009.

Philippe Decrauzat (born 1974 in Lausanne, Switzerland) revisits the history of 20th century abstractionism through the medium of his canvasses, murals, sculptures, films, and installations. He claims, however, a critical distancing from that legacy, and, as well, from the so-called autonomy of abstraction, supposed, as it is, to set it apart from other disciplines. This leads him to initiate an encrypted exploration which unobtrusively draws its inspiration from the very sources of our popular visual culture, as well as from the vocabulary of abstract art forms in order to create novel images. Each of these sources is consciously deconstructed to reveal a new point of view, or, perhaps, an external interference that will affect the reception of the image by the viewer.
In 2008 Philippe Decrauzat had solo exhibitions at the Wiener Secession and Bonner Kunstverein.

Ian Kiaer (born 1971 in London, England) makes fragile installations involving groupings of architectural models, untouched or slightly modified found objects, and two-dimensional works to create fragmented narratives. These works are prompted by the ideas of Utopian thinkers, architects, philosophers, and artists from various periods of history, whose common concern has been their resistance to and critique of dominant ideologies while providing possible alternatives for thought. Kiaer ́s installations often operate as projects or proposals and continue to employ the fragment as a means of questioning notions of totality and permanence.
The work shown here, Endless House Project: Convalescence/Kortrijk stands in a line with other works that engage with the architect Friedrich Kissler and his idea of the endless house. This model was initially shown at Kootz Gallery in New York, and later at MOMA. Kiesler designed the ‘endless house’ as a house that would continuously change with the requirements and needs of its inhabitants. Such a house, however, was never built. In addition, Kiaer included considerations for an art project for a hospital in Belgium. Ian Kiar has participated in numerous international exhibitions; most recently, he had shows at Alison Jacques in London, Tanya Bonakdar in New York, and Massimo de Carlo in Milan. His works are part of the collections of the Museum für Moderne Kunst, Frankfurt, Galleria Civica di Arte Moderna e Contemporanea, Turin, and FRAC Piemonte, Turin.

Alicja Kwade (born 1979 in Kattowice, Poland) this year received the renowned Piepenbrock Förderpreis; she also gained a lot of attention with her exhibition at Berlin’s Hamburger Bahnhof. Kwade works with various media, and recurring motifs in her sculptures, videos, and installations are time and light. She uses materials reminiscent of Arte Povera, which she however liberates from the idea of poverty by transforming them so as to symbolize great value and wealth. For example, she presses charcoal into the prismatic shape of a diamond, covers coal briquets with gold leaf, ennobles a pallet, and cuts found pebbles like gemstones. The work shown here, Never Ending, consists of two mirrors bent apart, between which a beer glass and a cigarette butt are jammed. Because of the mirroring, the objects form a circle and symbolise – between appearance and reality – the eternal circle of nightlife.

Cristian Andersen (born 1974 in Denmark, lives and works in Zurich) belongs to a generation of young Swiss artists who engage with their times and their social environment without however primarily wanting to articulate political claims or demands. Urban civilization, urban no man’s land, but also seemingly pristine nature play a large part in his work: as a stage-set or source of inspiration. Before this background, he made a number of works in recent years where themes reflecting time from his immediate environment are charged with historical symbolism. A sheetrock covered with aluminium foil and spray paint was cut in one corner in such a way that it stands in the room like a screen. After his first solo exhibition at Galerie Jan Wentrup this past spring, Anderson now has a solo show at Bregenzer Kunstverein until 23 November.
www.wentrupgallery.com/home/